Skip to main content
Visit and Experience Lesley
See Lesley for Yourself!
Check out our upcoming undergraduate admissions events as well as different ways to visit us.
StoriesShantel Hansen ’06

In the world of football, a referee’s job can seem grueling and thankless. Sports fans rarely know their names or remember their faces. Making an unpopular call can bring on waves of anger and criticism from players, coaches, and fans. But for some, observing a game and making split-second decisions under pressure feels like a calling. In a new documentary, "Her Turf," filmmaker Shantel Hansen explores the world of three women trying to break into the competitive, male-dominated world of professional football officiating. “It’s been a work in progress for 4 or 5 years and to see it come together has been an incredible experience.”

Of the 3,000 NCAA officials, only 52 are women. There were no female officials in the NFL until 2015, and currently, there is only one. Why document this minuscule group? “As an anthropologist I’m fascinated with sub-cultures and how they impact the larger culture. I’ve always been interested in referees and officials across all sports because we see them and we don’t know anything about them. We have this really negative stereotype of them. I wanted to know ‘who are these people?’ Why do they do it? Why would they put themselves out there so people can yell at them?’”

Shantel grew up in Ogallala, Nebraska, a town with one stoplight, fewer than 5,000 citizens, and a deep-rooted love of football. “Football has always been part of who I am—it’s part of my identity as a Cornhusker.” She came to Lesley in 2001 to work as a special events coordinator and eventually transitioned to a full-time roIe. She earned her interdisciplinary master’s degree in 2006 in Anthropology, Sociology and Psychology. A class on Film, Representation, and Identity, taught by Professor Emerita Arlene Dallalfar, inspired her profoundly; as part of her thesis project, she created a youth filmmaking program for at-risk Boston students called Reel Vision that let young people document their lives and experiences. But her own personal venture into film-making didn’t come until much later when a return to the west rekindled her interest in football culture—and the women on the sidelines.

“Her Turf” follows Annice, Mary, and Tangela—three very different women all pursuing careers as football officials. Shantel began researching the world of football officials and meeting with women referees during the off-season to talk with them about their experiences on the field (referees and officials aren’t allowed to talk to reporters during football season). It would be another year before she could begin filming. The learning curve was steep. “I had all of this experience doing field research interviews, but it was the first time I had ever worked with a film crew or used a camera. I had to read a manual to learn how to turn it on—true story.”

Going behind the scenes in the male-dominated world of referees could be tough as she followed the women through triumphs and setbacks. Veteran referee Annice Cannady, the first female official to referee a NCAA game in 2000, is especially blunt about the obstacles that women face on the field. “When you’re on the field as a female, it’s not like they’re like ‘oh, we’ve got a female official—she’s gonna be great.’ They are basically looking for failure.”

The heart of the story, says Shantel, is the work that the women do in the off-season. All prospective officials attend the Harold Mitchell Football Officials Camp—an annual three-day event that serves both as professional development and training opportunity and also a showcase for aspiring referees.

Shantel’s executive producer on the film is Dean Blandino, an NFL and college football rules analyst for FOX Sports and the National Coordinator of Instant Replay for the NCAA. A long-time supporter of inclusion and diversity in football, he’s given the documentary crucial exposure.  “I couldn’t have asked for a better person to come in and be a part of this.”

Taking “Her Turf” on the road

“Her Turf” has been in over 20 film festivals across the nation and won four awards. “I’m blown away by the response. When I started working on this project, people told me that no one would care. It wouldn’t get into festivals. I was wasting my time. For me, the stories were there and it was my job to document these incredible women.”

Shantel is already in pre-production with her next set of documentaries which will focus on building “Her Turf” into a series on women in male-dominated spaces, including bull riding, drag racing, smoke jumping, and horse racing. She is also filming a series featuring women in their 50s, 60s, and 70s who are dating online. She hopes to return to Cambridge soon to show “Her Turf” on campus. “Lesley is a place that I call home because it helped me become who I am today.” 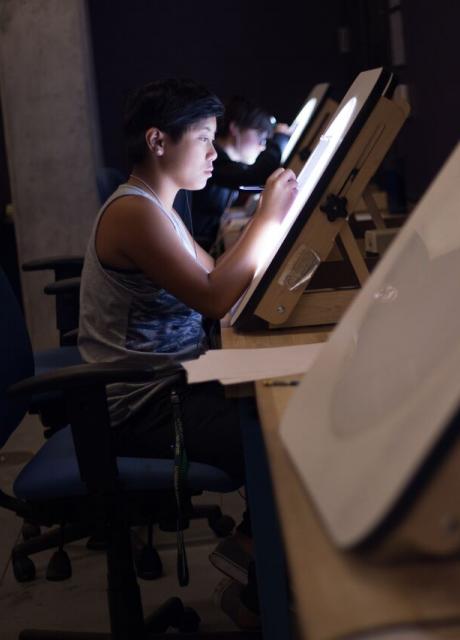 Learn more about our facilities.

Do something different this summer. Expand your horizons. Learn something new. Earn some college credit along the way.
Read more about our pre-college program.
email facebook twitter
29 Everett St, Cambridge, MA 02138
617.868.9600