“I’ve always been interested in cemeteries,” says sophomore Jonathan Hill, though he’s not disclosing a taste for the macabre.

Always drawn to history, Hill began doing genealogical research when he was 11, he held a spot on the Friends of Bedford Cemeteries Board in his New Hampshire hometown, and he began identifying the unmarked graves of Civil War veterans for Brooklyn, New York’s Green-Wood Cemetery as a high school freshman.

“I just love history and everything about it,” says Hill, who would like to make films with a historic bent.

It is not, therefore, surprising that the 19-year-old may have discovered the graves of two African American men who fought in the Revolutionary War.

Walking by Harvard Square’s Old Burial Ground earlier this year, Hill stopped to read a plaque on the gate. The inscription states that two black soldiers of the Continental Army, Cato Freeman and Neptune Frost, are buried within; however, the graves proved trickier to find.

“I decided to try to figure out exactly where they were buried, but I couldn’t because (their graves) were unmarked,” says Hill.

Intrigued, he began to do some research and uncovered some information on the men, who appear to be two of only three or four known African Americans from Cambridge who enlisted in the Continental Army.

According to “Unwelcome Americans: Living on the Margin in Early New England” by Dr. Ruth Wallis Herndon, Freeman was born into slavery and owned by one Ebenezer Stedman. He received his freedom from Stedman around the Battle of Bunker Hill and wasted no time changing his last name from that of his former owner to the symbolic Freeman. He soon enlisted to fight in the Revolutionary War, fighting for more than six years. After the war, he moved to Rhode Island, got married and eventually received 100 acres of land as backpay for his military service. Financial woes eventually brought Freeman back to Massachusetts. What happened to him after that is unclear.

As for Frost, even less is known. Hill’s research showed that he lived in Cambridge his whole life and was owned by Gideon Frost, a deacon at Christ Church, located next to the Old Burial Ground. He hasn’t been able to locate Gideon or Neptune’s final resting place yet.

Searching for the source

While this information was known to the Cambridge Historical Commission, Hill uncovered two other sources that brought new information to the mystery of where Freeman and Frost were buried. A 1905 newspaper clip and a record from the Daughters of the American Revolution state that the men were buried next to their former owners. Since the information was published about 100 years after the soldiers’ deaths, they point to an older, and as yet unknown, source.

“The question now is: how do we prove that that came from the 1700s? Where did they get their sources from?” says Hill.

So far, he hasn’t found any other information, and he doesn’t know if he will.

“The records are very spotty given the amount of time that’s passed,” Hill says. “African Americans at the time weren’t considered people, they were considered property,” so historic records tend to fail them.

For Hill, there is much more to this quest than simply uncovering long-forgotten history.

“These people gave up a lot, and they fought for our nation in a war that was so important to America,” he says. “It was incredibly important to our nation, and yet very few of us even recognize their sacrifice. They weren’t even given a decent headstone to mark that they mattered.”

That will change if Hill, with the help of other local historians, can determine precisely where the men are buried. The Cambridge City Council recently approved the creation of markers for Freeman and Frost if their burial plots can be confirmed.

“There’s a strong possibility that nothing may ever come of this, but we’re all giving it our best shot to find out where these two soldiers are buried,” says Hill. “If there is a record out there, I’ll find it.” 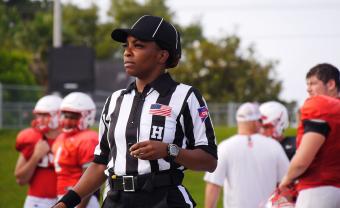