Skip to main content
Visit and Experience Lesley
See Lesley for Yourself!
Check out our upcoming undergraduate admissions events as well as different ways to visit us.
StoriesRansome ’21, Art & Design

If you follow the artist known as Ransome on Instagram or are lucky enough to receive his newsletter, Ransome Notes, you may be struck by the historical feel of his paintings and collages and their bold, contemporary shapes and colors. You may also note the number of group photos at galleries and exhibitions from Austin to L.A. that convey a sense of creative community that transcends geographic boundaries.

Geography and the historic migrations of Black American families, his own included, are themes that run through much of Ransome’s work. His formidable talent and his proclivity for creating a supportive artistic network have contributed to his success. Since earning his MFA in Visual Arts from Lesley in 2021, Ransome has exhibited his work in shows from Boston to Los Angeles, with an impressive series of solo and group exhibitions currently in development.

Creating a new direction as an artist

Already a successful commercial illustrator, Ransome came to Lesley’s Master’s in Visual Arts program in 2019 to develop his work as a studio artist. As an undergraduate, he had shied away from fine art.

“Not many of my family members had gone to college, let alone studied art,” he says. Commercial art seemed like an easier way to earn a living than selling paintings.

Ransome felt an MFA would give him equal footing as an African American artist entering the competitive and sometimes exclusive art world.

“Grad school is an important part of the artist conversation,” he says. Plus, “It let me have critical exchanges about my studio art while simultaneously removing any excuse for art folks to overlook or bypass my works because I didn’t have a graduate degree.”

At Lesley, Ransome found community in a diverse group of working artists who helped to affirm and shape his new sense of creative purpose. He also had the chance to work with curators and gained valuable insight into how to design exhibits and build working relationships with gallerists.

“The program allows you that time to experiment as well to develop your artistic voice,” said Ransome. “You’re receiving critical feedback from faculty, fellow students, your mentors, and visiting artists that helps guide you.”

Exploring the Great Migration and his family’s past

Ransome has lived and worked in the Hudson Valley, north of New York City, for almost 30 years. Born in North Carolina, he cherishes his close connections to the South. Much of his recent work focuses on the Great Migration, a population shift that saw more than 6 million Black Americans leave the rural South for Northern cities between 1916 and 1970.

Ransome’s grandmother, a sharecropper, witnessed 9 of her 10 children migrate north. “I went to New York, then came back and stayed with her, but I left again in 1977 and moved to New Jersey,” he recalls. “So I was kind of part of that last group of migrants.”

His family’s journey provide inspiration for his art, as do stories and figures from Black culture and history. Many of his recent paintings and collages reference the art of patchwork quilts, whose exuberant colors and patterns were crafted out of scrap fabric by Black women like the residents of Gee’s Bend, Alabama.

“These women had no art education at all, and yet their quilts rival many of the New York abstract expressionists,” he observes. “They made their quilts first as a means to keep their children warm. The crafting to make the surface a work of art was a bonus, and they’re making some of the most beautiful works of art ever created.”

Ransome’s own art often reflects on lives of Black Americans who, like his family, left the South for cities like Baltimore, Newark, and Boston. He’s fascinated by the complex generational patterns they created — the children who grew up in Northern cities but were still tied to the South, visiting for summer vacations, weddings, reunions, and funerals. Now a new generation, he notes, is moving back to start their own families in “a very different South than the one their grandparents left.”

His work also depicts challenging topics. A recent painting addresses redlining, in which banks denied loans to racial and ethnic minorities living in what they classified as “hazardous” neighborhoods. In his “Lynched Boxes” series, three-dimensional portrait boxes, framed with jagged, rusty nails commemorate six female lynching victims. The boxes, he explains, reference Congolese Nkodi statues, which serve as a home for uneasy spirits, where they can alternately find rest or emerge to mete out justice upon those who have harmed them.

Since earning his MFA in 2021, Ransome’s work has been in demand, with upcoming exhibits in Texas, Albany, Alabama, Boston, California, and his home state of North Carolina, where he’s been glad to find a lively contemporary art scene. He nurtures a wide network of artists, curators, and gallerists who share and support each other’s work on social media and in person, showing up to openings and making regular gallery-hopping trips to New York and further afield. As much as he loves the Hudson Valley, he doesn’t want to be a “local artist.”

“That's one of the things I've worked very hard on,” he says. “In one of our last classes at Lesley, the program director said that artists shouldn't only want to only have exhibitions in their community but aim to have a national presence. This was some very good advice in my opinion.”

See more of Ransome's artwork on Instagram or at ransomeart.com.

The College of Art and Design’s MFA in Visual Arts—one of the oldest and most established residency-based MFAs in the country—will give you the tools and community support you need to advance your artistic practice and develop the necessary skills for a career in the arts.

Read more about our faculty, students, and alumni

Eileen Powers ’21 turns self-portraits into the collaborative art series "can you make hair for me?"
Read more about Eileen's series 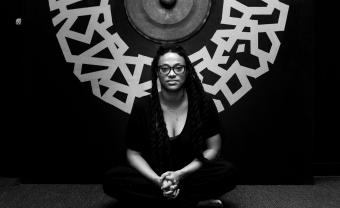 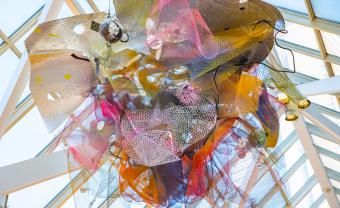