Skip to main content
More at lesley.edu/plan
COVID-19 Protocols for Campus Access in 2021-22
Our three campuses are open for classes, activities, and residential living. Find the latest information on our health and safety protocols on our Plan page.
StoriesKirsten Green ’22

Kirsten Green with "Paul Revere" during filming of a Visa commercial for the Patriots in 2009.

It wasn’t until Kirsten (née Thresher) Green ’22 landed a coveted spot on the New England Patriots cheerleading squad that she told anyone she’d tried out.

Her parents “were over the moon. My mom is a diehard Patriots fan,” says Kirsten.

Joining the cheerleading team of one of the most successful NFL franchises in the country was kind of a big deal for Kirsten who, until that point, had never been a cheerleader and doesn’t like speaking in public.

Dancing, however, has been a lifelong love, and one that the Lesley senior and Psychology major hopes to incorporate into a career helping others.

Green took her first dance class at age 2 and spent the next 15 years as a competitive dancer, which helped her secure her position on the squad.

“I love expressing myself in that way, so having the dance background was really beneficial when I auditioned for the team,” she says.

At only 18 and fresh out of high school, Kirsten was the youngest member on the squad her first year.

“A lot of the team members took me in as their little sister,” she says. The other women were in their 20s and 30s, which meant post-practice hangouts at bars were out-of-bounds for her.

The rigorous practices and long commutes from her home in Western Massachusetts to Foxboro kept her busy anyway.

“There was a lot expected from us… so I had to really be physically on my game.”

That first year she tried to balance college and cheering, but with home games, dozens of mandatory promotional appearances across New England and some health concerns, Kirsten decided to temporarily sideline school.

Professional cheerleading is notoriously low-paying work, but there were some perks. During her two-year tenure, she appeared in a Visa commercial for the team and posed for two Patriots swimsuit calendars, with photoshoots on the beaches of Aruba and the Dominican Republic. Although there are strict rules against fraternizing with the players, she got to meet Tom Brady, Rob Gronkowski, Julian Edelman, and Coach Bill Belichick, who she described as nice but “really intimidating.”

Although she’d enjoyed her time at a cheerleader, at the end of her second year, Kirsten opted not to try out for what would have been her third and final year on the squad, per team rules.

She began working toward a degree in physical therapy but paused her studies again while working a variety of jobs, from bartending to modeling to nannying.

“I never pictured myself going back to school until I was bartending,” she says.

Mixing drinks may not have been a long-term job for Kirsten, but it did point her to a possible career as a mental health professional and, ultimately, to Lesley.

“I felt like a psychologist already, listening to everybody's stories,” she jokes.

She enrolled through Lesley's Center for the Adult Learner in 2016.

“When I decided to get back into school, I researched schools around me that had online programs and Lesley was at the top.”

The next several years were a series of stops and starts on Kirsten's journey to get her bachelor’s degree, with her wedding in 2017 and soon two pregnancies. As a new mother of two busy boys, she began to question if she would ever finish her degree, but she also had a renewed interest in psychology after experiencing severe postpartum depression with her second child.

“There weren’t too many resources for me, especially out here in Western Mass,” she says. “I need to help other women who are experiencing this.”

Back in the game

Kirsten discovered she was closer to the end zone than she’d realized: she only needed two credits to graduate. Following an internship with Resilient Birth, a trauma-informed counseling organization that builds on her interest in maternal mental health, she is on track to get her degree in spring 2022 and to graduate with a 4.0 GPA.

One day, Green would like to get her master’s degree in expressive therapies to incorporate her love of dance, but for now she’s happy to complete this milestone.

“Right now I'm just like so thrilled to be finally getting bachelor's degree at 31 years old.”

The online option for our Psychology bachelor's degree allows you to have the flexibility to study when and where you want. You’ll learn in a virtual community that supports you, with interactive elements like chats and discussion forums that keep you connected. With access to the latest online learning tools and educational resources, you can be sure you’re getting everything a Lesley education has to offer. A required internship provides the hands-on learning you need, so you’ll bring valuable experience into the workplace.

Read more about our faculty, students, alumni and programs 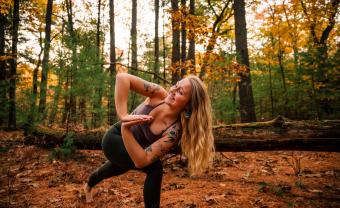 Are you ready to finish your degree?

No matter how many years it's been since you attended college, earning your degree could be closer than you think.
Read about the Lesley Center for Adult Learning 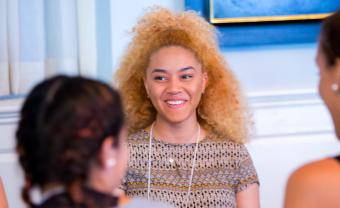 As the first in her family to go to college, Joanna gained support from the Urban Scholars Initiative.
Read more about Joana Martins-Tabora
Choose an online program that fits with your life and your schedule:
Business Management Online
Design for User Experience Online
Human Services Online
Liberal Studies Online
Psychology Online