Poverty is more than a lack of money. It’s a “constellation of factors” that includes deprivation of healthcare, adequate food and other resources, as well as a loss of dignity and voice.

Maryann Broxton’s personal experiences with poverty lent a unique lens as a researcher in a groundbreaking new study aimed at identifying a clearer definition of poverty and its contributing factors.

“I’m a person whose direct experience of poverty offers insight on what poverty in the U.S. really means,” says Broxton. “This perspective is valid, and it’s important to ask people like me to share their knowledge gained from experience.”

Since earning her bachelor’s degree as an adult learner at Lesley, Broxton has devoted the past three years working on the research project, titled Multidimensional Aspects of Poverty (MAP). The research team included service providers in poverty-eradication programs, academic researchers and people who are or who have experienced poverty. These people worked together from their distinct perspectives to create a comprehensive understanding of living in poverty. The research method is referred to as “Merging of Knowledge.”

“What makes this research completely different from past studies is that people with a direct experience of poverty are active co-researchers from beginning to end – designing the tools, analyzing the data, and writing the reports,” says Broxton.

I’m a person whose direct experience of poverty offers insight on what poverty in the U.S. really means.
Maryann Broxton ’16, Bachelor of Arts in Liberal Studies

Broxton began her work by volunteering as an activist with the organization overseeing the research in 2013. She was eventually hired in 2016 as national coordinator of the United States research team at the outset of the MAP study.

She trained facilitators and managed peer groups so researchers could document aspects of poverty firsthand, traveling to locations including New Orleans, Oakland and Appalachia. In all, 23 peer groups were interviewed across the country.

Her team released the final report in March, titled “Pushed to the Bottom: The Experience of Poverty in the U.S.,” which contains detailed findings and new insights into poverty.

“Perhaps surprisingly, the data revealed that a lack of money was not the first thing peer groups mentioned,” says Broxton. “Poverty is a constellation of factors that leave you without a voice or access to adequate healthcare and resources, and that creates employment-related hardships and a sense of shame through stigma and isolation.”

“Poverty goes much deeper than just income level,” Broxton and her co-authors write in the report. “Poverty means having to swallow your pride when accessing a much-needed subsidy, knowing that your children are not receiving the same quality education as their peers, being trapped in a run-down community that lacks resources, being told to be grateful for the little bit you do have and being shamed if you are not.” The report asserts that “poverty in the United States is shaped by features of our culture and values that create a structural process of subjugation.”

Broxton and the team of researchers have presented their work at the United Nations in New York and in other major cities around the country, as well as at the Organization for Economic Co-operation and Development in Paris. They are developing a social worker training from the results that can be adapted for anyone who works with vulnerable populations.

"Maryann’s work with this project brings a much-needed spotlight on the domestic and transnational issue of poverty," says Lesley social work professor Josh Baldwin. "It's particularly exciting that her work in this area began in our Research Methods course with an investigation of food deserts. I am thrilled to see how far she has expanded her work in the critical study of poverty and how her research project will benefit current and future social work practitioners."

Broxton’s route to becoming a poverty researcher was circuitous.

She dropped out of Everett High School in the ninth grade. She earned her General Education Development (GED) at 17 and went to hairdressing school four years later. In her 20s, she worked as a stylist and held various office jobs in the Boston area, struggling to support herself and her family.

“While working at a temp job, I had the thought one day that this is not how I want to spend the rest of my life — that I would just waste away if I didn’t leave,” she recalls. “I knew I was capable of doing more and needed a better way of supporting my family.”

She went back to school at 35, completing her associate’s degree at Bunker Hill Community College (BHCC).

“I originally thought I would obtain a secretarial degree or become a paralegal, but once I was at BHCC I discovered how much I loved the education process,” she says.

She transferred to Lesley, enrolling through our Center for the Adult Learner and earning her bachelor’s degree in liberal studies in 2016.

“I was really interested in the courses at Lesley, and I was interested in social justice issues and policy, and how the two were intertwined throughout history to create some of the conditions that exist for people today,” says Broxton.

The experience was transformative.

“Lesley allowed me to craft a program that made sense to me, incorporating my work and my school life,” she says. “I don’t think I would have appreciated college the way I did as an adult student, and my advisor Gene Ferraro was my personal cheerleader.”

Poverty is a constellation of factors that leave you without a voice or access to adequate healthcare and resources.
Maryann Broxton ’16, Bachelor of Arts, Liberal Studies

She received the Yawkey Scholarship while attending Lesley and won the Luke Baldwin Award when she graduated, which is given annually in memory of longtime Lesley administrator Luke Baldwin to an adult student who has “taken the risk to return to college to live Luke’s ideal of lifelong learning and continued service to the community.”

“Maryann is one of the most motivated and intelligent women I know,” says Ferraro. “She has taken her own experiences and has utilized them to provide help and service to others in need.”

Now Broxton is touring the country to share the MAP results and developing the social work training. Her team is also creating a research methods training to share with universities and those who work with vulnerable populations, including healthcare providers, law enforcement, K-12 educators and policy makers.

“I’m excited to help build a network that believes the best way to eradicate poverty is through real, meaningful participation of people with a direct experience of poverty,” says Broxton.

The MAP research project was the U.S. component of an international project conducted from 2016 to 2019 in six countries: Bangladesh, Bolivia, France, Tanzania, the United Kingdom and the United States. It was a partnership between ATD Fourth World and the University of Oxford. 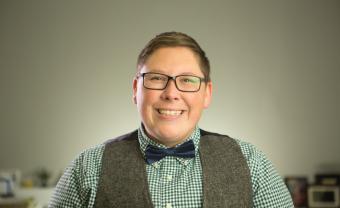 "Give yourself permission to succeed, and do it on your own terms,” says Jackie, who returned to college as an adult learner.
Read more about Jackie Geilfuss

“I can change the world for others, because I’ve changed my own.”

Explore resources for funding your education. Apply for scholarships and grants to help cover the cost of your bachelor’s degree.
Learn more about financial aid and scholarships.