'I can change the world for others, because I’ve changed my own.'

It’s been seven years since Katya Zinn started college, excited for her future as she launched into a competitive performing arts program. It was a time of hope that rapidly spiraled into trauma and chaos.

But this spring, three years after transferring to Lesley, she earned her bachelor’s degree.

She is preparing for an upcoming Fulbright Fellowship in Malaysia. She’s won writing awards, received recognitions for her activism and service, and recently delivered powerful testimony at the Massachusetts State House. It’s an impressive list of accomplishments that belie a long and arduous journey back to wellness and triumph.

“It doesn’t mean everything’s been good ever since. Healing is not a linear process, and there’s no finish line,” says Zinn. “I had to work really hard to get here with some luck and with some really great people who believed in me when I didn’t believe in myself.”

It all began during her freshman year at a private college in New York when she was sexually assaulted at her first party. She shared the incident with someone who failed to disclose that they were a mandated reporter and they reported it to campus authorities and law enforcement. She was subsequently subjected to a series of interrogations, Title IX violations and indignities, including disciplinary threats for underage drinking, harassment from peers, psychological torment from her perpetrator – and ultimately expulsion. “I was being gaslighted,” she recalls.

“The only way I knew how to process that was to assume it was something I had done wrong. It’s a cognitive dissonance that a lot of survivors experience,” says Zinn.

The ensuing trauma and depression prompted her to try to take her own life, setting off dark years of substance abuse, depression and even homelessness.

“My life was spiraling. I had gone to school excited about the things I was going to study. I was losing everything all at once – school, my friends, my reputation,” she says. “For a long time, I got lost in anger and bitterness.”

Back in Los Angeles, where she grew up, she finally found a shelter and recovery center that helped her get back on her feet, and eventually, she moved to the East Coast in 2015.

“I lost three years of my life finding new ways to destroy myself because I couldn’t live with the reality of seeing the ugliest things that human beings can do to each other,” says Zinn. “But the sooner we can find what makes us happy and makes us feel alive, the sooner our life can change direction in a really meaningful way.”

After teaching preschool for a year and taking some college courses, she learned about Lesley and enrolled through our Center for the Adult Learner in 2016 to study expressive arts therapy.

“I wanted to do something that was both creative and therapeutic, and I didn’t realize it was possible to do those at the same time until I found Lesley,” she recalls.

Becoming an ally and activist

During her first semester at Lesley, Zinn was assigned a research paper on a social problem and asked to propose a solution. So she chose campus sexual assault.

“As much as I didn’t want to confront this, I couldn’t see myself writing about anything else,” she recalls. “Through that research, I found out something I never fully appreciated – that my story wasn’t unique at all. It was so much bigger than me as an individual.”

The paper blossomed into a presentation at Community of Scholars on “Campus Sexual Violence as Social Problem.”

“An incredible thing happened after that where other survivors would come tell me their story,” recalls Zinn. “By telling my story, I became someone people could come to after keeping it in for so long. It was a really powerful experience.”

From that point on, Zinn decided to tackle issues around campus sexual assault and prevention.

“I did not intend to be an activist, but I saw something happening that was not OK and was hurting other people, and I was in a unique position to do something,” she reflects. “Because of what happened to me, I had this unfortunate and hard-won insight into the structural problems at literally ever level of these cases – the way they’re thought about, talked about and adjudicated at campuses across the country. It’s not one school. It’s a systemic problem.”

She developed a training on prevention and consent that she presented to Lesley students, the Athletics Department and other groups. She started Lesley’s campus chapter of It’s On Us to tackle campus sexual assault awareness and education.

Zinn also helped lobby Lesley to create a designated Title IX coordinator position, for which she served on the search committee. (Title IX is the federal civil rights law that prohibits discrimination in educational programs and activities on the basis of sex.) In April, she delivered testimony to legislators at the State House to urge action on bills aimed at stopping sexual violence on college campuses and supporting survivors.

“Katya has tremendous autonomy and leadership skills, and she’s been a true mentor and an asset to underclassmen on self-advocacy and self-care,” notes Lesley Chief Diversity Officer Lilu Barbosa, whose office oversees Title IX. “She has built relationships across the institution and she’s used her wealth of knowledge and life experience to make meaningful contributions to our campus.”

The journey to healing

Along the way, Zinn has discovered that there’s a space for creativity within social justice reform.

She spearheaded the “Paper Doll Project,” a campus exhibition that showcased artwork by and for survivors of gender-based violence. The opening reception featured live performance art and a healing workshop – and an art raffle that benefited the Every Voice Coalition to End Campus Sexual Violence.

I wanted to do something that was both creative and therapeutic, and I didn’t realize it was possible to do those at the same time until I found Lesley.

Katya Zinn ’19, selected for a Fulbright Award to Malaysia

With her bachelor’s degree in expressive arts therapy under her belt, Zinn leaves for her Fulbright in Malaysia in January, where she’ll teach English and run community engagement programs.

“I’ll be bringing expressive arts therapy and spoken-word poetry to have the community work together on an art showcase,” she says.

Zinn also uses storytelling both as an outlet and a tool to educate others.

“This is the hill I will die on in terms of survivor advocacy. No one has a right to your story except for you,” says Zinn. “Sexual assault is a crime of power, and when you lose your right to control what happens to your body, it’s a massive denial of agency. It’s incredibly harmful and retraumatizing to lose your voice, too.”

She wrote an essay about her suicide attempt and resulting coma, titled “What happens when you die,” that won the July Creative Nonfiction Award from Silver Needle Press.

“A short version of the events is that my rapist graduated in 2015 and is now a high profile journalist. And I was expelled for attempting suicide before I made it a single semester. That’s a headline, but it’s not the real story because the real story is so much more complex than that,” says Zinn. “Even for the people in this story who have caused so much harm and destruction, it’s important to me not to take their actions out of context and to seek understanding.”

At 25, Zinn feels older than her years in many ways – and also works to reclaim the years she lost.

“There’s so much that I know now, things that could be so different now,” she reflects. “It’s why I’ve dedicated so much of my life to this. I have the ability to prevent what happened to me from happening to somebody else.” 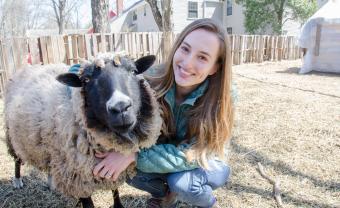