Changing our minds through practice

With his repeated invocations of the wisdom of the Dalai Lama, the nearly 100 audience members at Thursday evening’s Sonnabend Lecture might have been surprised to hear that Dr. Richard Davidson had been a “closet meditator for years.”

The Harvard-trained professor of psychology and psychiatry, after all, presumably would have found little value in the “soft” practice of meditation beyond relaxation and momentary stress relief, fellow scientists might have assumed.

But then he began seeking answers to the question of why different people react differently to trauma or other negative events.

“The basic question is, why are some people more vulnerable to life’s slings and arrows, and why are others more resilient?”

After a 1992 meeting with the Dalai Lama, who challenged Davidson to use his scientific tools of inquiry “to study kindness and compassion” rather than disorders, Davidson began studying the Tibetan Buddhist holy man’s meditation and mindfulness techniques to “shape our brains in ways that promote human growth and wellbeing.”

This journey of inquiry eventually led Davidson (called “Richie” by Lesley Director of Mindfulness Studies Nancy Waring) to become William James and Vilas research professor of psychology and psychiatry and founder and director of the Center for Healthy Minds at the University of Wisconsin Madison. In her introduction, Waring alluded to several years of effort trying to secure Davidson as a Sonnabend lecturer.

“We have been after you for a long time,” she said.

Davidson, in turn, expressed gratitude to the Sonnabend family and lauded the university for its early and innovative embrace of mindfulness studies. “You guys have been doing this really longer than anyone else in this country,” he said.

This spring’s Sonnabend lecturer is best known for his groundbreaking work studying emotion and the brain, and is a highly sought-after expert and speaker, leading conversations on well-being on international stages such as the World Economic Forum, where he serves on the Global Council on Mental Health. Time magazine named Davidson one of “The 100 Most Influential People in the World” in 2006.

“The fact that we don’t teach attention to students in our schools is nothing short of scandalous,” Davidson said. “Being distracted is toxic to our wellbeing.”

But, while one can boost attention, become more resilient and exhibit greater compassion and empathy through mindfulness and meditation, it takes work, like any other skill.

“You can’t learn to play the violin by attending a lecture,” he said. “You’ve got to practice.”

Davidson’s most recent book, “Altered Traits: Science Reveals How Meditation Changes Your Mind, Brain, and Body,” was available for purchase and signing by the author, following the lecture.

The Sonnabend Lecture honors the memory of Elsa Sonnabend, former chair of the Lesley University Board of Trustees. The Sonnabend Lecture brings to Lesley’s campus distinguished practitioners in the field of human services to work with Lesley’s students and faculty and enrich the academic community. 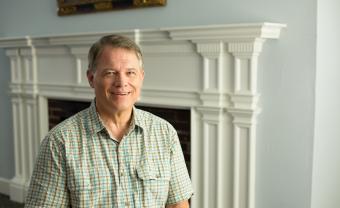 Our Mindfulness Studies master's degree is the first of its kind in the U.S.