The American Dance Therapy Association has recognized Lesley with the 2018 Innovation Award for establishing a new way to learn dance/movement therapy.

In 2013, Lesley pioneered a hybrid program that combines online coursework with in-person instruction – a method that has been gaining an international audience.

Program Coordinator and Associate Professor Nancy Beardall accepted the award this month on behalf of Lesley at the annual conference of the American Dance Therapy Association in San Antonio, Texas.

The association is the governing body of dance therapy programs and practitioners across the United States. Each year, the its board of directors chooses an individual or group that has impacted the field through new, original and inventive methods to receive the Innovation Award.

“It shows they respect the new model,” Beardall said of the award. “It was really incredible to accept this award on behalf of everyone.” 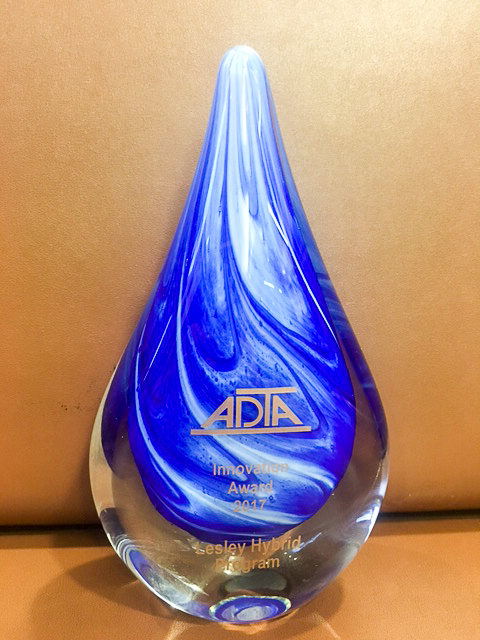 Lesley has a well-established dance movement therapy master’s program, but creating a low-residency version of it was an involved process. Our low-residency Expressive Therapies PhD program laid some of the groundwork, which Beardall and her colleagues used as a starting point. From there the Expressive Therapies Division formed a think tank to design a program that would give students crucial interaction with instructors and peers despite being in different locations.

The result was a hybrid low-residency program that brings cohorts together for three weeks each summer, while the rest of the coursework is done online through video conferences and other interactive tools.

Since its launch, the program has been refined with feedback from students and technological updates. It’s also begun to garner international attention.

A group of Lesley faculty also traveled to Poland in September to present the DMT program to educators and practitioners of the European Consortium for Arts Therapies Education.

As a result, many dance movement therapists have been interested in learning more about the inner workings of the program.

“I do think down the road other programs will be doing similar things,” Beardall said.

“By providing a low residency dance therapy program we reach students nationally and internationally who would never have been able to become dance therapists, which in turn helps many underserved communities globally to receive much needed care through dance therapy,” said David Katz, dean of the Graduate School of Arts and Social Sciences.