Honoring the legacy of Paolo Knill

Thalia Vitikos has two framed photographs hanging over her piano—one of pop idol and piano virtuoso Elton John and one of expressive therapist Paolo Knill, who taught at Lesley for over 20 years. Paolo, a founder of Lesley’s graduate program in Expressive Arts Therapy and a towering figure in the field of intermodal art therapy, died in 2020 at the age of 88. Thalia’s bequest will one day establish a scholarship fund in honor of Paolo, who had a profound impact on her life and her work.

“He was so fascinating, so creative—he really was a genius,” she says. “He impacted my entire career as an expressive arts therapist. And I want him to be kept alive in a very positive way.”

Thalia was in college studying psychology when she learned about the graduate program in Expressive Therapies at Lesley. A pianist by training, she was curious about the connections between music and mental health and interested in learning more about how the arts could be used in therapeutic practice.

Lesley’s graduate programs in Expressive Therapies and Integrated Arts in Education, established less than a decade earlier, were blossoming under the guidance of seminal figures including drama therapist Peter Rowan, dance therapist Norma Canner, and arts therapist and program founder Shaun McNiff, who recruited Paolo from Tufts University. For Thalia, it was a thrilling place to be.

She was particularly influenced by Paolo’s focus was on intermodal integrated arts.

“We tend to think of the arts as separate—music here, movement and dance over there, poetry over here, drumming over there. What Paolo did was to say that they’re all integrated—they don't belong in these silos.”

She carries this commitment to integrated arts therapy into her practice.

“If I start playing a song, and my client isn’t really responding to that, I find a very natural way to move into art—maybe they’re a more visually-based person. And then you can move into poetry. They’re all interconnected.”

In her work with clients and trauma survivors, Thalia takes an expressive rather than diagnostic approach to therapeutic art.

“Paolo and Shaun instructed us not to try to interpret when somebody draws a picture. The image, or the sound, or the movement comes up and you notice it and let it naturally lead you. What I need to do, as an artist, is to get out of the way. And as a therapist, it’s taught me with a client, to get out of the way. The healing is in allowing the psyche to do what it needs to do.”

Thalia’s idea to establish a scholarship fund at Lesley in Paolo’s memory came to her one day while she was at the piano.

“I was going to redo my will—it needed to be updated,” she says. “And I was playing the piano and thinking about how I miss Paolo. Even though I had only seen him twice in the 35 years since I left. But he had such an impact. And I thought it’s only right that Paulo is remembered at Lesley.”

Although Paolo established a graduate school in his native Switzerland after leaving Cambridge, Thalia wants to honor his legacy at Lesley.

“I’m glad his school in Switzerland is doing really well,” she says. “I’m happy about that. But it started here. I studied here. I feel he needs to be honored here.”

Thalia’s advisor suggested that she include Lesley as a final beneficiary in her qualified retirement plan, which involved contacting the custodian of the account and completing a simple form specifying that whatever remains in her account at the end of her life will be used by Lesley to create the Paolo Knill Endowed Scholarship Fund. The fund will provide scholarship opportunities for Lesley students studying Expressive Therapies.

Making a Lesley education accessible to Expressive Therapies students from all backgrounds is important to her. And four decades later, her gratitude for how Paolo Knill and her experience at Lesley impacted her life and work is palpable.

“I am so grateful that that program was there, just at the time when I was ready for it,” she says. “It didn’t just provide me with a career—I could have done something else. But as a kid from small-town America who played the piano and didn't have a lot of opportunities…to come to Lesley and meet someone like Paolo who accepted me and made me see who I was. I didn’t get that before. I was a girl from a Greek family—‘oh, you’re just gonna get married, and you’re gonna teach piano lessons.’ It was Lesley and Paolo, who affirmed me. It was just such a blessing. I want him to be kept alive in a very positive way.”

Learn more about how to make a planned gift to Lesley

A defaced fence in Needham recently got a makeover with help from Megan Carleton ’08 and Diya Ghosh ’09.
Read about the mural. 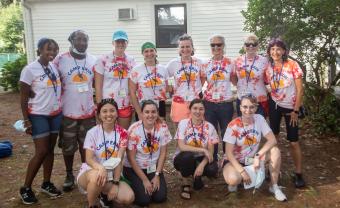