Restoring Songs and Stories to the Children of Afghanistan

This story begins in the 1960s. Louise Pascale, as part of her Peace Corps volunteer assignment in Afghanistan, worked with a group of Afghan musicians and poets to collect and print a book of 16 children's songs. It was distributed to elementary schools in Kabul. When her two-year tour was over, she came back to the United States to study and teach. She brought a copy of the songbook back with her, and put it on a shelf.

In the late 1990s, the political climate changed in Afghanistan. The Taliban, an Islamic fundamentalist group, came into power and began exerting repressive policies. They censored all cultural activities and institutions, music among them. Musicians were exiled, and all music and music-making was illegal, even the humming of lullabies to young children. It did not take long for children's songs, which had previously been taught in schools, to disappear completely from Afghan culture.

US-led forces dismantled the Taliban in 2001, and the country began the process of slowly regaining its cultural awareness. Pascale, by then a professor at Lesley, committed to returning her collection of songs from the original songbook to the Afghan children. This led to the beginning of the Afghan Children's Songbook Project, and the subsequent reprinting, in 2006, of Qu Qu Qu Barg-e-Chinaar: Children's Songs from Afghanistan.

A second book, Awsaana See Saana  (One Tale, Thirty Tales) was created and distributed in 2012, with 16 more children's songs from various ethnic groups and an accompanying 60-minute CD.

Currently, approximately 50,000 copies of the two songbooks have been distributed to schools and orphanages throughout the country. Each songbook includes a CD and cassette tape. An accompanying teacher's guide for each songbook was also developed in 2010 after Pascale returned to Afghanistan to assess the project. She found that "Afghan teachers rarely have training opportunities, and are desperate to learn more effective strategies for engaging students in learning."

The goal for the songbook project is to not only preserve and honor the rich musical heritage of Afghanistan but also enhance basic literacy skills. Music is a natural link to building literacy. Because writing materials are scarce in the country, each songbook is now delivered with a small notebook and two pencils for each child. The songbooks are offered free of charge in Afghanistan but due to a large number of Afghans who live outside Afghanistan, the songbooks can be purchased through the Afghan Children's Songbook Project.

Funding for the project comes from organizations such as National Geographic, Save the Children, Afghan Institute for Learning, Canadian Women for Women in Afghanistan (CW4WAfghan), as well as through individual donors and the US State Department's Cultural Affairs Office in Kabul. In 2016, CW4Wafghan, at their Afghanistan Ascending: Strengthening Education Together  conference, awarded Pascale their Champion for Education in Afghanistan Award for her work on the Afghan Children's Songbook Project.

There is a reason the Taliban banned music. They know its power, and its threat to ignorance. Louise knows its power, too, and she has harnessed it, as a tool for children's learning, and in the process, helped revive and preserve a proud part of Afghanistan's cultural history.
Lauryn Oates , CW4WAfghan program director

With more than 20 ethnic groups and dozens of languages and dialects, Afghanistan has a rich folkloric history. However, this part of the country's cultural heritage has also been endangered by years of war and instability. In early 2018, CW4WAfghan awarded Pascale a grant that will help fund a new book, Bood Nabood: Once Upon a Time - Traditional Children's Folktales from Afghanistan. It will consist of six folktales gathered from elders in various provinces around the country, three in the Dari language and three in Pashto.

The Folkloric Tales for Literacy Project will result in the collection, publication, and distribution of 5,000 copies of the new book and accompanying teacher's guide, which Pascale will write. The project will be done in collaboration with the Ministry of Education, and will ensure that children in isolated parts of the country can get the book and that teachers around the country will have access to the teacher's guide. Trivision Studios, an Afghan owned and operated media and printing company located in Kabul, who has partnered with this project since the beginning, will print this third book. Printing and distribution is anticipated to occur in 2018.

Preserving More than Stories and Music

Pascale is often asked whether there is concern that the Taliban will target schools where children are exposed to the music. Her response is always the same: "There has never been even one Afghan who has mentioned any concern. In fact, quite the opposite reaction occurs. They are thrilled to have their children's songs back again. They see this as a valuable and essential project and encourage us to keep doing it. If there had been any hesitation, I wouldn't have continued the project."

And so the project continues. Preserving stories and music, providing access to them for Afghans living outside the country—this all serves to shift the perception and provide another story about Afghanistan. As Pascale says in her TedX Talk: "There can't just be a single story about Afghans or Afghanistan. This project strives to broaden perspectives and offer another story."

Learn More About Our Program 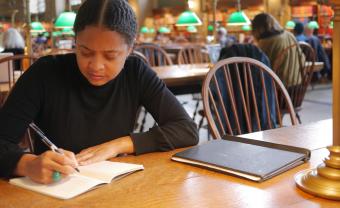 Lesley professor reads her poem “Only" and gives us a glimpse into her world as Boston's Poet Laureate.
Read more about Danielle Legros Georges