Skip to main content
Visit and Experience Lesley
See Lesley for Yourself!
Check out our upcoming undergraduate admissions events as well as different ways to visit us.
StoriesDavid Levine ’84

An educator uses music to create 'classrooms of belonging'

David Levine '84 plays the guitar for a group of schoolchildren.

For musician, author and educator David Levine ’84, music has been the most important tool he uses to connect with students and teachers.

He founded the Teaching Empathy Institute in New York’s Hudson Valley in 2016 and is the author of several award-winning books including Teaching Empathy and Field Guide to a School of Belonging.

For over 35 years, he has used what he calls “music dialogues” to give educators the skills to put empathy at the heart of their teaching and create schools of belonging. With a new documentary, “Finding Howard,” he’s taking a deeper look at a song and the story behind it that shaped his path as an educator.

Reflecting on his path, teaching was a dramatic reversal for David, who originally planned to become a lawyer.

Feeling unready for law school, he decided to substitute teach for a year so he could pursue his interest in music and writing. But he discovered that he loved teaching and connected with kids. As a substitute, he was often placed in classrooms full of bored, unruly middle and high school students. His strategy for engaging them? Bring his fiddle to class.

Eventually David realized that he’d be happier in a classroom than in a courtroom. A fellow teacher told him about Lesley’s teacher preparation programs and he decided to pursue a master’s degree.

It was a formative experience. He vividly recalls the Lesley faculty who influenced him.

Through his internships, he was immersed in the hands-on everyday life of a classroom teacher.

“Because it was through Lesley, it was very collaborative,” he recalls. “I wasn’t just grading papers—I was very much a co-teacher.”

Lessons from Lesley: Creating community in the classroom

He graduated in 1984 with a master’s degree in Creative Arts and Learning (a program similar to Lesley's current M.Ed. in Integrated Teaching Through the Arts) and a certification in K-6 teaching. He accepted a job at an elementary school that was looking for a teacher to relieve two crowded grade four classrooms. He didn’t realize until he arrived that the principal had given him a challenging group of students.

“He’d told the other two teachers to pick the nine kids who they felt should go into the new class—basically I got the 18 rejects,” David remembers.

His students were wary and disengaged, aware that they’d been handpicked for exclusion. Before he could teach them effectively, David realized, he had to build trust and create a sense of community.

He drew on what he’d learned during his Lesley internships.

“I put them in a circle and I asked them ‘How do you feel about this new class?’ No one said anything. So I said, ‘Well, what’s something you like about school?’ The only thing they could think of was the pizza. I had my guitar with me and we wrote a song to the tune of ‘Good Lovin’ by the Rascals, only it was ‘Good Pizza.’ Before I knew it, I had built community. And that was so much from the Lesley experience, through these amazing people who modeled for me. They really let you unearth your artistry as an educator.”

Being a teacher also put him in a unique position to build community outside of school and to connect with other educators. He started doing drug prevention workshops on weekends and began to deepen his interest in helping other teachers learn the kinds of community-building skills that he was using in his classroom.

“It was all about building support systems and focusing on the emotional needs of the children and the adults. …I was traveling all over and meeting with parent groups, teachers, students— k-12, rural, urban, suburban. It was always about listening, being present, and responding.”

And he always had his guitar on his shoulder.

“The music was always a way of opening a portal for people.”

A song begins a new conversation

One night while he was driving home from work, David heard a song that changed everything: “Howard Gray,” written and sung by musician Lee Domann. The simple lyrics described Lee’s childhood memories of a classmate being bullied, and his own deep remorse at having joined in.

David decided to learn the song and sing it for his sixth graders. Their response astonished him and he began to use the song as a tool in his classrooms and trainings. Playing “Howard Gray” opened up conversations like nothing he’d ever seen.

“The song was the magic,” he says.

He tracked down the songwriter and learned more about the true story behind the song, whose lyrics and tone seemed to create an empathic space for bully, victim, and bystander alike. Lee had reached out to Howard, asking for understanding and forgiveness, and the two men had forged a friendship.

In 2016, Lee called David to tell him that Howard had passed away the night before. David, who had no filmmaking experience, resolved to create a film that would carry Howard’s legacy forward.

“Finding Howard” was released in the summer of 2021 and was selected by seven film festivals focused on peace, global peace, social change, and education. David hopes the film will help spread the message about the importance of teaching empathy.

David is offering screening workshops of the film in 2022. The Teaching Empathy Institute will also be partnering with Lesley’s Center for Inclusive and Special Education to design a School of Belonging Certification Program to train teachers as School of Belonging practitioners and coaches.

In a time when many Americans feel divided and disconnected, David sees opportunities for educators to help build stronger community connections through their work with children.

“There’s something tender about that—it allows people to connect in a different way,” he says.

For both teachers and students, he says, empathy is the key.

“People always ask if you can teach empathy,” he says. “Well, you can create an awareness of it as an intention, as a goal, as a way of being, as a place to stand – and then provide the skills to put it into practice.”

Learn more about Integrated Teaching Through the Arts

Explore how a master's degree in Integrated Teaching Through the Arts can help you use your artistic passions to create more inspiring, supportive classrooms.

Learn how our alumni are using their degrees in the classroom and beyond. 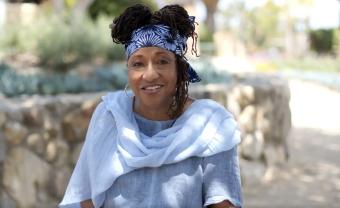 Educator and performer Victoria Burnett puts storytelling at the heart of her teaching. She recorded a story based on the narratives of eight different people who lived through Juneteenth.
Read more about Victoria Burnett

Teacher of the Year

5 Ways to Teach Empathy and Create 'Schools of Belonging'