Gilles, winner of the 2014 National Education Association Member Benefits Award for Teaching Excellence as well as top honors from the California and national teachers unions, was the keynote speaker of the 20th June Fox Lecture Series on April 7. Speaking to more than 60 educators and others in the University Hall Amphitheater, Gilles revealed that she is as passionate and committed to teaching as she was when she began. 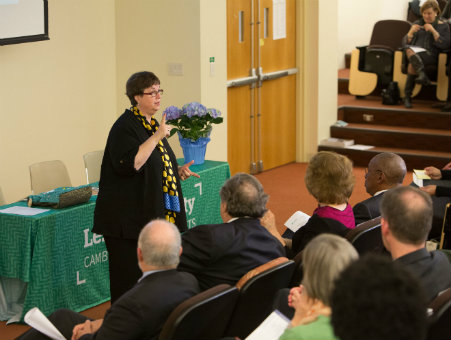 Though philosophical, political and ethical changes threaten to impede the delivery of a thorough, well-rounded education in primary and secondary schools in “a system that has ground others to dust,” passion and advocacy for students can prevail, said Gilles, who in 2012 received a Lesley M.Ed. in Integrated Teaching through the Arts.

“After 30 years, I am still learning and challenged and a little scared,” she said, adding, “I come to you with a story of hope.”

For the first part of her story of hope, Gilles donned a mortarboard to remind teachers that they are scholars, experts and truth-seekers unafraid to tackle the most difficult concepts. Like the Statue of Liberty, teachers embrace the “huddled masses yearning to be free,” but, Gilles said, they go a step further. “We actually have the audacity to say we will educate them.”

While teachers are either demonized on one hand, or “elevated as martyrs and missionaries,” on the other hand, they are actually learned advocates for young people often marginalized because of race, economic class, sexual orientation or gender identity.

Gilles later replaced her mortarboard with a beret, underscoring the artistic nature of teaching, which she likened to a form of worship. She spoke of tailoring curricula to meet the needs of individual students, and tailoring it again year after year as the students and challenges change. She also spoke of reaching the whole student, of meeting students where they are intellectually and developmentally, and being careful to recognize when students are speaking, even without words.

“Slow down. Savor. Jettison efficiency: it’s overrated,” she said, to laughs and applause.

Like an artist, or an appreciator of art, the key is to help learners look below the surface and be more inquisitive about the material they encounter, whether it be a painting, a book or the latest “Star Wars” movie. 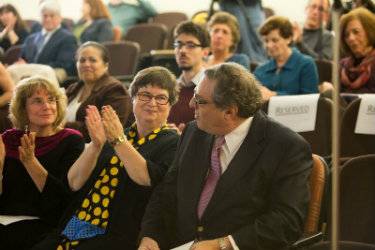 “Students thank me for helping them see more clearly what’s around them,” she said. “Teaching to a test is an act of sterility.”

Demonstrating her commitment to combating conformity and being an advocate in education, Gilles sported her third hat: a multicolored propeller beanie. Yet despite its whimsical appearance, the beanie was effectively a gladiator’s helmet in the battle on behalf of the voiceless.

“Voices of the oppressed and their allies will always be trivialized, minimized, muffled and, God forbid, silenced,” she said.

One silenced voice belonged to Matthew Shepard, a gay university student who was murdered — effectively crucified — in a 1998 hate crime in Laramie, Wyo. She developed a curriculum based on the play "The Laramie Project: (“Laramie is Anywhere, USA,” she said) so her senior high school students could grapple with and perhaps eventually understand the crimes inflicted on the marginalized. At the June Fox lecture, she also invoked the memory of James Byrd, an African-American man chained to the back of a truck and dragged to his death by white supremacists in Texas the same year. Her students are keenly aware of the myriad manifestations of hate in this world.

But she also insists that, at the root of all the exposure and education to humanity’s uglier nature, is an abiding faith in kindness.

“We’re no longer teaching students to find meaning,” she said, “but to become meaning.”

The annual lecture is named for Professor Emerita June Fox, a former dean whose son, Avrom, said he still considers Lesley “part of the fiber of her being.” During his welcoming remarks, Graduate School of Education Dean Jack Gillette spoke of the “powerful, passionate people committed to young people throughout their lifespan.”

Gillette was referring to Dr. Fox, as well as Gilles, but also to a number of new teachers honored at the April 7 lecture, including: