Printmaker and linguist Sarah Hulsey is the recipient of a Mass Cultural Council 2020 Artist Fellowship. Hulsey, an adjunct professor in our College of Art and Design, was one of 19 artists selected from a pool of 632 applicants in the areas of drawing and printmaking, poetry and traditional arts.

Of the $15,000 award, Hulsey says, “What I value most is the recognition and validation of my work by my peers. As artists, we are very fortunate to live in a state where the legislature values and supports the arts to this degree.”

Hulsey, who began teaching book arts and letterpress at Lesley in 2013, is a past recipient of the Somerville Arts Council’s Visual Art Fellowship and the Walter Feldman Fellowship for Emerging Artists in New England. Her art is featured in dozens of collections across the United States.

She has both a master’s degree in book arts and printmaking from the University of the Arts and a Ph.D. in linguistics from the Massachusetts Institute of Technology.

“I pursued art in tandem with linguistics almost since I began college,” says Hulsey. “For a long time, I thought of them as separate interests. Eventually, though, I came to realize that what drew me to the scientific study of language and to making visual art were fundamentally the same.”

She likens the repetition and processes of language — from the combinations of sounds into syllables, then into sentences and discourse — to the iterative sequences of printmaking.

Illustrating this is Hulsey’s recent series, “Asterisms,” in which she depicts patterns made of linguistic sounds. A print may feature Arabic vowels or Portuguese consonants with thick yellow lines printed over dark gray grids that trace figures from the sounds of language.

“My work is concerned with the hidden, structural beauty of language,” she says. Printmaking “gives a tangible analogy to the complex beauty of our linguistic knowledge.”

With the fellowship, Hulsey plans to fund an “as yet undecided” piece of work. 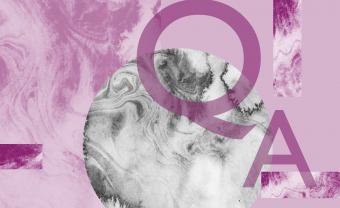