A $10,000 grant from the City of Boston will allow animator Maya Erdelyi to complete a project dear to her heart — “Anyuka,” an animated short film profiling her grandmother.

“She was a World War II refugee and Holocaust survivor, had lived on three continents, had had three husbands, spoke many languages, escaped (Hungary) … with my father who was 6 years old,” says Erdelyi, who had a close relationship with her grandmother before her death in 2014.

Erdelyi, a New York City native, was one of five artists chosen from a pool of 192 applicants vying for Boston’s Artist Fellowship Award.

“The artists selected in this round of the Artist Fellowship Awards are a reflection of Boston’s extremely diverse creative sector,” Boston Mayor Martin Walsh said in a press release. “Boston is proud to be home to so many talented individuals, and we’re excited to recognize their contributions to our city in this way.”

Over the past five years, Erdelyi split her attention between teaching as a Lesley College of Art and Design adjunct professor and part-time lecturer at the School of the Museum of Fine Arts at Tufts, working on freelance projects as well as getting married and becoming a mother. Making progress on the film has been a challenge given her commitments and the extensive collection of personal artifacts Erdelyi’s grandmother, Veronika Foldes Frame, left behind.

Although her first husband died in the Holocaust, Frame escaped Hungary, crossing the border illegally to Austria, journeying to Italy and then boarding a ship that ended up in Venezuela. She married a man there, immigrated to Queens, New York and, after the death of her second husband, married an American doctor.

Frame documented much of her life. Erdelyi has hours of Super 8 film from her grandmother’s cross-country travels, a 300-page memoir, hundreds of photos and stacks of documents, from how she became an American citizen, to files from her days as a secretary. Additionally, Erdelyi received 6½ hours of her grandmother’s interviews from Yale University’s Fortunoff Video Archive for Holocaust Testimonies. Some of this ephemera will be represented in the film.

The class that changed her life

A “hybrid” animator, Erdelyi creates in analog as much as possible, preferring that to a completely digital approach. She worked in a number of media before she took an animation course for an art requirement while earning her master’s in education at Harvard University.

“That class changed the direction of my life,” says Erdelyi, who went on to study animation at the California Institute of the Arts and also met her husband through her Harvard animation professor.

“I was interested in film and storytelling, puppetry and costume. What I loved about it and still do is that it brings together all my different interests,” says the self-described experimental animator. “I can be designing clothing for a puppet and I can be thinking about storytelling, I can do printmaking in animation and painting. It’s this medium that can combine so many things.”

The myriad creative avenues that animation offers for an artist also make it part of the reason she enjoys teaching.

“It keeps me close to what I’m interested in,” says Erdelyi, whose parents were professors. “I’ve had other jobs where I could probably be making a lot more money, but I thought I was wasting my time.”

Contributing to a university is “one of the best things you can do in an independent society,” she says. And she loves helping up-and-coming artists explore animation, a medium that inherently draws people in.

“People don’t always watch a painting or a drawing the way they will really sit with an animation, almost like listening to a song,” Erdelyi says. “People will sit with it and experience it.”

Just as Erdelyi has spent considerable time chronicling her grandmother’s life, so she would like her film to be a work of art that causes viewers to pause and linger. Erdelyi plans to complete “Anyuka” in 2020. For updates on the film, visit www.anyukafilm.com.

Fellowship winner’s pottery is all about the big reveal

Our VFX facility makes Lesley the only art and design school in New England to offer a visual effects program.
Read more about VFX studios 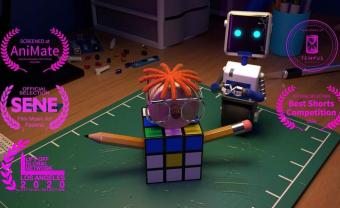