Instituto Camões to give university 30,000 euro

Lesley will expand our Portuguese curriculum over the next three years through a new 30,000-euro grant (approximately $33,000) from the Camões, Instituto da Cooperação e da Língua in Portugal. The partnership became official on Nov. 8 at a signing with General Counsel of Portugal in Boston João Pedro Fins do Lago held on Lesley’s Doble Campus.

“Lesley University deeply values our connections to the Portuguese community in Massachusetts,” says Lesley Provost Margaret Everett. “The support from the Camões Institute and our partnership with the Portuguese Consulate in Boston is a great opportunity to expand our offerings in Portuguese language and culture and to further strengthen our ties to the community.”

Associate Professor Sonia Perez-Villanueva, who established Lesley’s Portuguese curriculum, and adjunct Giuseppe Formato were instrumental in establishing the connection with the Instituto Camões, an international organization dedicated to the worldwide promotion of Portuguese language, culture and international aid on behalf of the Portuguese government. Formato has a prior affiliation with the institute.

In addition to funding enrichment activities for the Lusophone community, the grant will allow Lesley to continue and develop its Portuguese program for undergraduate students. 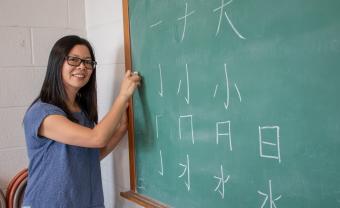