As speaker at 2003 Commencement, the late civil-rights leader’s story and gravitas were unforgettable

Over the weekend, the university community mourned the death of to civil-rights legends, the Rev. Cordy Tindell (C.T.) Vivian and Georgia Democratic Congressman John Lewis. Today, a number of Lesley faculty remember the May day in 2003 when the latter man spoke at the university’s Commencement.

“My memory is of a quiet and gentle man who took an interest in each one of us whom he met that evening,” says University Professor Martha McKenna, alluding to a pre-Commencement dinner arranged by then-president Dr. Margaret McKenna. “In his Commencement speech the next day, I discovered a tower of strength encouraging us to stand up for the rights of all those whom we would serve as teachers, counselors, artists and environmentalists. I believe this combination of kindness and strength was his great gift to us all.”

In a message to the Lesley community July 18, President Janet L. Steinmayer alluded to the strength of character and profound contributions of both Lewis and Vivian, one of Dr. Martin Luther King Jr.’s closest associates. Of Lewis, she wrote:

“Known as the ‘Conscience of Congress,’ Rep. Lewis crossed and constructed racial and equity bridges whose foundations it remains our responsibility to complete and uphold. One of the 13 original Freedom Riders and the last surviving speaker from the 1963 March on Washington, Rep. Lewis put his life on the line to oppose racial discrimination and to overturn Jim Crow segregation laws.

“He also championed the rights of LGBTQ people through his leadership on Equality Act of 2019. In 2003 Lesley University awarded Rep. Lewis an honorary degree, and he was the speaker at Commencement that year.”

University Professor Shaun McNiff was there and recalls the day as important and inspirational.

“John Lewis was a huge presence and, as always, he spoke eloquently, with tremendous grace, and inspired all,” says McNiff.

He recollects the friendship between Lewis and former President McKenna, a civil-rights lawyer, who had worked together for years on related issues.

“What is unique and persistent in my memory was his close friendship and relationship with Margaret McKenna, who worked with him during the Carter Administration. My memories of the day were all about their special relationship, which is what brought him to Lesley.”

While Congressman Lewis was a steady presence on the speaker’s circuit, his life’s work, and that of the Rev. Vivian, are particularly resonant with Lesley’s mission and aspirations.

From President Steinmayer’s letter: “In working to achieve our vision of Inclusive Excellence at Lesley, we must hold ourselves accountable for honoring their legacy of racial justice and inclusion by repairing and building bridges within our community.”

Poet tackles racism in the classroom 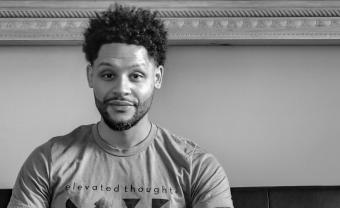