Our new Vice President for Advancement Verónica Jorge-Curtis knows firsthand the power of philanthropy to expand access to higher education and careers.

After growing up in the New York City borough of Queens, and then moving with her family to the Dominican Republic (her father’s native land; her mother is from Ecuador), she returned after nine years to New York for college and attended Hamilton College upstate. But, as the daughter of working-class immigrants, she lacked the means to afford higher education. Her college didn’t let that stand in her way, however, and she ended up majoring in world politics.

“As a recipient of financial aid at a private college, I quickly learned to value the tremendous generosity of those who supported the institution and made my access to this education possible,” says Jorge-Curtis.

As a student, she worked in the college’s financial aid, admissions and multicultural affairs offices and interned at the career center, experiences she says helped her “understand and respect all the important departments that make a college function” and prompted her to work in education and help others attain it.

President Janet L. Steinmayer recently announced Jorge-Curtis’s hiring in a message to faculty and staff and says she is enthusiastic to have Jorge-Curtis in this critical position overseeing both fundraising and alumni affairs.

“The Office of Advancement is about trust and relationships, and Verónica possesses the credibility and depth of knowledge born of 25 years of experience in institutional advancement in Cambridge and Greater Boston,” President Steinmayer says. “Her understanding of how relationships and shared values inform strategic, mindful philanthropy programs, and her commitment to helping all students share in the promise of higher education, make her an ideal addition to the Lesley family.”

Jorge-Curtis most recently worked as director of advancement for the Fenn School, an independent day school for boys in grades 4-9 in Concord, Massachusetts. She worked in similar capacities in the private Shady Hill and Buckingham Browne & Nichols schools in Cambridge. In the past year, she has also volunteered as part of the development committee of Esperanza Academy, a tuition-free middle school for girls in Lawrence, Massachusetts.

Advancement’s power to help transform women and men from marginalized communities is part of what attracted her to the opportunity at the university.

“I love that Lesley has such a solid public purpose,” Jorge-Curtis says. “In educating teachers, counselors, social workers, artists and others in the human arts, the university is giving back to the community. I’m representing an institution that is so committed to its social justice mission.”

Jorge-Curtis is also gratified to see so many women and people of color on the president’s cabinet, evidence that the university is committed to infusing the principles and goals of equity, diversity, inclusion and justice throughout the university.

“I am thrilled to join the Lesley University community,” she says. “I’m especially looking forward to building relationships with alumni/ae, parents and friends as we work together to advance the university’s mission.” 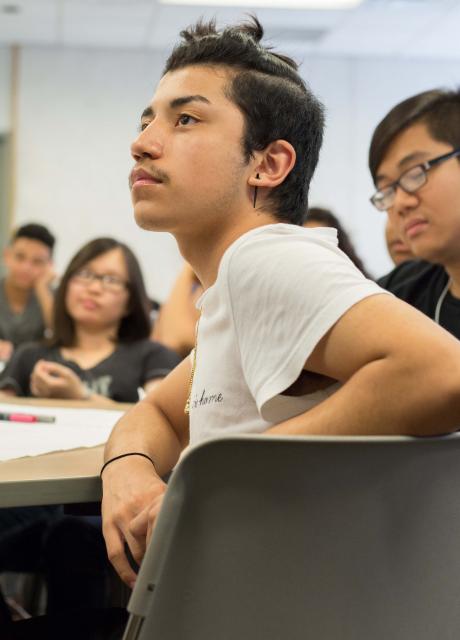 Learn more about this initiative.

A celebration of scholarships