Local activists share their experiences and beliefs with campus community

We have to love ourselves enough to protect ourselves.

That was one of the messages that local members of the Black Lives Matter movement delivered during a panel conversation in Marran Theater on Tuesday evening to an audience of approximately 70 students, faculty, staff and community members.

Two members each from Black Lives Matter Cambridge and Black Lives Matter Boston – which are official chapters of the national #BlackLivesMatter movement – spoke about their work as activists and what it means to each of them. They also delivered challenges to white audience members, gave advice to black students at Lesley, answered questions, and called on everyone to take up the cause to promote equality.

“In order to wake up, become more aware, to take action to do something, we must first be willing to tell ourselves the truth,” said presenter Karlene Griffiths Sekou, a member of Black Lives Matter Boston. “This settler colonial state has always been fascist. We have to be more honest about facing difficult truths and naming them and having conversations in such a way that we shift our consciousness.”

The Black Lives Matter (BLM) movement was founded in 2012 after George Zimmerman was acquitted in the shooting death of 17-year-old Trayvon Martin in Florida. The Cambridge chapter formed over two years ago, recalled organizer DiDi Delgado, who recounted for the audience some of their actions – such as protesting at the HONK music festival in Somerville and Cambridge, and shutting down Cambridge City Hall by chaining themselves to the doors.

“Protest is an interruption of business as usual,” said Delgado. “If we’re not appealing to the moral compass of everyday people, we have to shut it down somewhere.”

Delgado spoke about the Cambridge chapter’s local advocacy for affordable housing and trans rights, as well as their work on the international scale. Members of the chapter have traveled to advocate for displaced Hurricane Katrina victims in Baton Rouge, La., provided food and housing assistance in Haiti, and gathered at the Standing Rock Indian Reservation in solidarity with the Lakota people in their fight against the Dakota Access Pipeline.

“We are all in this together,” said Griffiths Sekou, who called on people to become self-aware and educated to take action whether it’s in your home, your house of worship, in your classroom or on your syllabus. “Whatever is happening in your sphere of influence where you have power to say, “Stop. This does not represent who I am.’”

Sustaining the movement and momentum

The presenters shared their experiences and advice on creating a sustainable movement, with actions that go beyond demonstrations, such as community engagement events that provide things like meals and books. 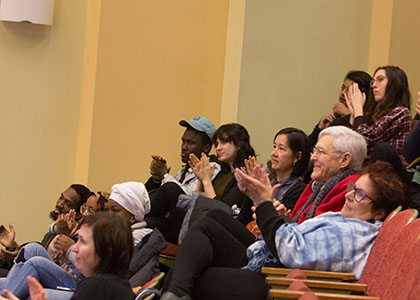 “We’re intergenerational,” said panelist Martin Henson, a member of Black Lives Matter Boston. “We’re all different ages coming together, grandparents and grandchildren in the same room, advocating for issues and struggles that effect the black community. We’re all around the world.”

The speakers recounted their work to become trained activists – learning how to engage in nonviolent direct actions, meeting with veteran demonstrators, and getting trained as street medics.

Self-care is also key – including self-validation, peer support, and counseling.

“Take what given to you here and bring it to your coffee shops, your yoga classes – wherever it is,” said Henson. “Take it back to your spaces and make sure it impacts the people around you.”

Some students in the audience talked about a variety of challenges of being black on a majority-white campus and longing for more faculty members who look like them, and for a more diverse student body.

Students conveyed that it can be hard to be the only black student in a class and be looked to as the representative or spokesperson for all black people and perspectives, or to cope with white fragility, meaning white peers seeking comfort who are distressed by a system of white supremacy.

“I find a lot of people who would like to support us,” said student Rocky Cotard. “I’m often asked, ‘How do I support you?’ I have no idea. I’ve been trying to support myself this whole time. How do you tell someone how to continue supporting you when there is no system to support yourself?”

Another student asked for advice in building a student movement here.

“Whatever happens in your campus microcosm is only a small sampling of what’s going on in the world,” said Jones, who is a graduate student at Brandeis. “Really root it in principles and build a mission and a vision that can outlast the two, three or four years that someone is in school.”

When the activists travel around and speak, whether they’re at schools, community centers or at businesses, they call on organizations to diversify and let minority voices be heard and influence the conversation at all levels.

“A lot of times people talk about diversity and I think it’s a buzzword,” said Delgado. “If you truly want your organization to be diverse, it will be from top down to bottom – not just the service workers.”

The talk was presented by our Diversity Council, followed by a reception in Marran Gallery. At the outset of the discussion, Diversity Council Chair Amanda Wager and Vice Chair Bwann Gwann welcomed the audience and encouraged more important conversations like this in the context of Lesley’s mission to focus on diversity and inclusion. 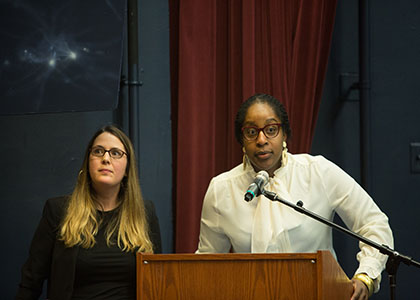 “This is also to discuss important issues and conflicts that impact us as a community,” said Gwann, “so bringing Black Lives Matter Cambridge and Boston here we thought would be great for everyone to learn more about their mission and their efforts in combating racism.”

When Henson introduced himself on the panel, he indicated that there may be tense moments during the presentation.

“We don’t do the respectability game and hope you don’t get offended,” said Henson. “When you hear these things, understand there’s a level of risk when we come out here and we do these things. … I don’t want black people to worry about the things we worry about on a daily basis. I don’t want my daughter to have to grow up and deal with these things we deal with on an everyday basis. I’m doing it so the people who come after me don’t have to do this.

“It’s a constant validation of black lives on a daily basis,” said Henson. “It’s something we have to say to affirm ourselves. We have to love ourselves enough to protect ourselves.”