Perspectives vary in discussion on race

How do we overcome racism in America? 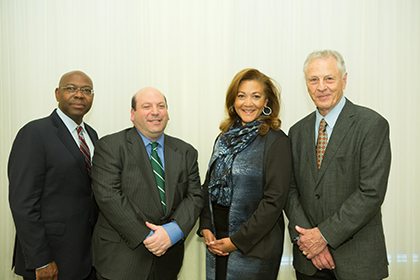 “America is a changing nation … That causes enormous fear,” said Morris Dees, co-founder of the Southern Poverty Law Center, an advocacy organization, who pointed to the increasingly diverse population. “We’re trying to circle ourselves, because America will be great when we all learn to get along with each other.”

Sitting on the Symphony Hall stage with moderator Jared Bowen of WGBH News, the speakers offered divergent and, at times, conflicting perspectives, informed by their own experiences with race.

Dees started by speaking about his childhood in Alabama, growing up on a small cotton farm alongside the black workers in the segregated south, where one of his uncles was a member of the Ku Klux Klan. Early on in his career, members of his family urged him to change his last name so his activism wouldn’t be associated with them.

Those experiences profoundly influenced his life’s work to fight for racial justice and human rights.

“America has to change,” he said. “I just love people, and I think it’s important to get to know people.”

Riley, who described himself as free-market conservative, said that his areas of focus in journalism were shaped, in part, by media coverage of black issues.

“I was disturbed by my own profession’s approach to covering issues, going to the traditional civil rights leaders, like Al Sharpton, and Black Lives Matter and the NAACP,” said Riley. “That’s not representative of all black people.”

Bowen, the moderator, asked the initial questions, followed by audience questions submitted on note cards. His first question was how the panelists view racism in America today.

“It has very little utility,” said Riley, author of “Please Stop Helping Us: How Liberals Make It Harder for Blacks to Succeed.” “I avoid it. It’s easier to get across your point without it.” 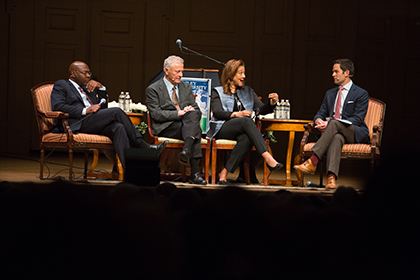 On the flip side, Norris founded an initiative to foster dialogue on the subject, called The Race Card Project, in which people are encouraged to comment on their experience of race in six words on a Race Card. She left NPR in 2015 to focus entirely on the project that has generated an archive of 50,000 Race Cards, with tens of thousands in the queue.

“I spend more time talking about race than racism,” said Norris, but understanding racism is also key to the conversation. “I think we’re absolutely capable of understanding race. It takes will. You have to have a tough stomach lining to do it. We have to get comfortable with being uncomfortable sometimes.”

Riley is concerned that racism is viewed as the only barrier to black progress today, at the peril of addressing other variables, such as marriage rates and family status.

“It’s knee-jerk to equate racism with racial disparities in income and educational attainment, and the question is, ‘Are there other factors, and whether they might be playing a bigger role?’” he posed. “In terms of public policy, where should the focus or emphasis be?”

But Dees and Norris argued that racist barriers are alive and well. Dees noted a study in which identical resumes were sent out, some with black-sounding names and others with Caucasian-sounding names. The latter received double the rate of interview requests.

“That ought to tell you there is something systemic,” said Dees. “There are built-in biases.”

When Bowen asked the panelists what the Presidential election has meant for race in America, Norris noted how the tone of the Race Card responses has changed, revealing increasing tensions around politics, economics and demographics. Dees sees that hard-won progress is being reversed. 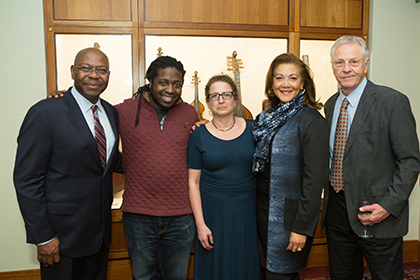 “We have a ‘Birther’ for a President,” Riley said of President Donald Trump. “Obviously, he’s lost a lot of blacks right there. What’s worse, he doesn’t seem particularly interested in unifying the country.”

One thing the panelists all agreed on is the need for honest and open conversations, and exposure to different ideas and sources of news.

Riley called on everyone to break free from insular world views and social circles, and to welcome debate, dialogue – and even controversial viewpoints.

“We’re afraid to do that,” he said. “There is a fear, particularly among young people.”

She called on everyone to deeply reflect on these unconscious influences that we harbor.

“Get people to honestly look at their own lives,” said Norris.

Earlier in the day, Norris visited the Lesley campus and spoke to an audience in Marran Theater about her career in journalism and the Race Card Project. 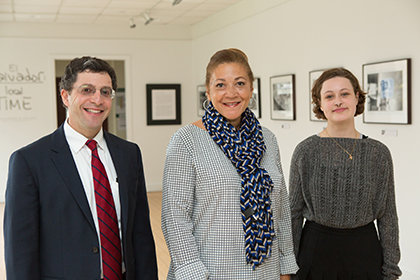 Steven Shapiro, dean of our College of Liberal Arts and Sciences, and
student Elizabeth Shugart (right) speak with Michele Norris in Marran
Gallery during her visit to campus.

When she started out in her career, Norris consciously avoided covering the so-called “race beat” for fear of being pigeon-holed. Then, during Barack Obama’s campaign, as the term “post-racial” surfaced, she focused on people’s fascination with the notion of a “post-racial” world. This ultimately inspired The Race Card Project.

“I basically put the basket on the table at the right moment, because America is changing,” she said during the evening lecture.

On campus, when she asked Lesley students, faculty and staff to come up with words to search in the Race Card database, people shouted out words that had clear connections to race like “reparations” and “work.” Then she asked for a word that seemingly didn’t have any clear correlation and someone said “ice cream,” which yielded hits, too. The project reveals just such surprising results, she said, and prompts people to express things they might not otherwise.

“The most productive conversations about race are the ones you never hear,” said Norris.

Important and timely discussions are hallmark of our Boston Speakers Series

At the start of the evening, Lesley President Jeff Weiss took to the Symphony Hall stage and welcomed the audience, thanking the speakers, audience members and sponsors for a thought-provoking, informative, and often humorous 2016-17 season of the Boston Speakers Series, which also featured:

The 2017-18 season will begin on Oct. 11 with former British Prime Minister David Cameron.