Dun dun. Ah, that familiar “Law & Order” sound is back as the NBC show returns to television after an 11-year hiatus. There will, of course, be some familiar faces, including actors Sam Waterson and Anthony Anderson, but the show has new faces too, including one Lesley alum working behind the scenes — Digital Filmmaking graduate Scott Bausemer ’19 who has his first full-time TV gig as an assistant for the show’s art department.

“Construction, props, essentially anything that is seen on screen that isn’t a part of the camera department, and isn’t the wardrobe or actors, falls in the art department’s jurisdiction,” explains Bausemer.

After graduating from Lesley, the Quincy, Massachusetts, native worked in the photography industry before moving to Brooklyn. He was a production assistant on several commercials filmed in New York City before landing the “Law & Order” job.

“It was paying rent, but I really do like what I’m doing now,” Bausemer says.

One of his first responsibilities on the job was to review past episodes for set details. “I never watched ‘Law & Order’ before,” Bausemer admits. “I’m obviously going to have to get on it.”

Growing up, he was more influenced by filmmakers like Wes Anderson than “Law & Order” creator Dick Wolf. Through four years of high school, Bausemer studied broadcasting and photography and followed that trajectory at Lesley. Learning about all aspects of the filmmaking process prepared him for his current job. It also inspired him to develop his writing skills.

“I would like to consider myself a storyteller and film is my outlet,” he says.

I would like to consider myself a storyteller and film is my outlet.
Scott Bausemer ’19

Bausemer is pretty sure he minored in creative writing. (“I took a lot of creative writing classes. I’m pretty positive I got the minor,” he says.) He dabbled in a few stories and scripts during college but none was quite right before he began working on a current personal project.

“It’s somewhere in the vein of a comedy. It’s about creating art, a little about filmmaking and what it takes to make art,” he explains.

All of his Lesley coursework will come into play as actor, director and scriptwriter for the project. Filming is still some time in the future, but in the meantime, Bausemer is content working off-camera and having access to the inner workings of the art department. And while he only gets to go on set occasionally, Bausemer is holding out hope for an encounter with star Anthony Anderson, so he can ask him about a certain slapstick comedy he starred in almost years ago.

“I have a lot of questions about ‘Kangaroo Jack,’” he says.

Faculty Ingrid Stobbe has been recognized for her teaching by the University Film and Video Association.
Read more about Ingrid Strobbe. 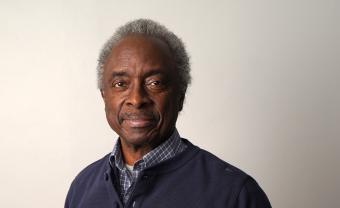 "I was matched up with four professional fine artists whose work resonated with my interests and aspirations. Each artist gave me feedback, criticism, reality checks and encouragement. Meeting with them gave me a sense of what it meant to be a professional artist in terms of the work itself, networking, outreach and expectations around making a living."