Skip to main content
More at lesley.edu/plan
Fall 2021 Reopening Plans
We will reopen our campuses for classes, activities, and residential living in Fall 2021. Find the latest information on our Fall 2021 Plan page.
StoriesYvonne Sierra ’22

A self-portrait by Yvonne Sierra.

From the moment she stepped off Bus #77 at our Porter Square campus, Yvonne Sierra ’22 says, “I knew right away that that was my place.” A few months later, on a freezing 9-degree day, the 43-year-old Puerto Rico native disembarked from that same bus to start her first classes as an undergraduate student.

Yvonne moved to the mainland after the deadly 2017 Hurricane Maria left the island in tatters. With her husband and teenage son, she settled in Arlington, across the street from The Children’s Room, a nonprofit that helps children and families grieve ­­after the death of a loved one. It seemed like providence, she says. Yvonne’s young daughter had died from brain cancer years before, and after years working with children, she yearned to be able to help kids in distress on a therapeutic level.

In researching The Children’s Place, which employs several Lesley graduates, she discovered a profile of Expressive Therapies alumna Colleen Shannon ’04 and the Expressive Arts Therapy undergraduate program on the Lesley website. This branch of therapy was something Yvonne had been looking for, she just hadn’t known it existed.

Yvonne worked with preschool students for many years. “I loved the children, I loved what I was teaching them, but [there was] the emotional part that I couldn’t touch in their life, like I couldn’t help them with family problems. I was a little frustrated by that,” she says.

Expressive Arts was an opportunity to meet that emotional need.

Effusive and outgoing, Yvonne views most things in life as an adventure and starting school as an adult learning gave her little pause. She found that the community welcomed her immediately.

“I saw that there were so many different students, different ages, different languages and that they came from different places around the world,” says Yvonne.

What did vex Yvonne was learning in her second language.

“I had to go over the same page. I didn’t understand anything,” she remembers. “There’s English that you hear in the movies and in songs, and there’s college English.”

Writing essays took forever, but she was determined to do well, and she has. Yvonne has earned all A’s except for one B, and she’s already planning to use her success as motivation for her future grandchildren.

“If they ever said that they don't want to study I'm going to show this to them. Look what your grandma did,” she says, laughing. “No excuses.”

For now, Yvonne is working toward her bachelor’s degree and mining what she learns along the way. During the pandemic, she began applying Expressive Therapy techniques with her family—from creating art to meditating and responding to music—Yvonne became even more convinced that this was her calling.

“You know, it was breakfast—home, lunch—home, and dinner. So I decided, I'm going to use [Expressive Arts Therapy] with me, and we're going to use it with my family.” She attributes the “peace and sanity” they experienced during lockdown. “I realized that this is not something that I just do because I want to, it's just who I am.”

Yvonne applies what she’s learning at Lesley to herself, as well. During the pandemic, she set up an art studio in her home where she could paint. Since moving to the mainland, she’s been compelled to paint trees.

“I'm very drawn to how resilient the trees are,” she says. “When the hurricane came, some fell but most of them, stayed strong. They’re alive like we are alive. I thought they have something to teach us.”

That is a message she shared during a pop-up shop with her paintings at the Burlington, Massachusetts, West Elm retail shop this summer.

“I really believe expressive art therapy works. I know everyone needs it,” she says.

Yvonne also spent the summer volunteering with a program for children with special needs at Bina Farm, a Lexington-based therapeutic horse farm.

Working with kids remains one of her passions, and an area of therapy she would like to pursue after she finishes her degree.

“If I make a difference in only one person, only one child's life, I will be happy. Because every human being is important, and we all need each other.” 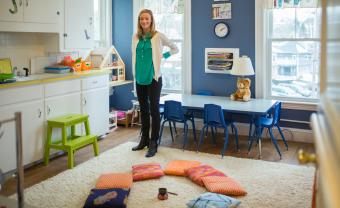 Pandemic prompts therapists to help doctors, each other