Skip to main content
More at lesley.edu/covid-19
COVID-19 Guidance
In response to COVID-19, all courses are now online and employees are working remotely.
StoriesShannon Lee ’23

The humanitarian crisis at the U.S.- Mexico border has been high on the nation’s radar lately, especially within the last year. As many people watch in dismay, wondering what they can do to help, Shannon Lee, a first-year undergraduate student here at Lesley University, is actually making an impact.

“My mom was the one who sent me the link,” Shannon recalls. This is how she discovered an organization called Casa de Paz SLV. “But before I even knew about [Casa de Paz SLV], I came to Lesley with the intention of studying Holistic Psychology and Spanish. I wanted to combine them and offer trauma counseling in Spanish-speaking communities at the border within detention centers and refugee settlements.”

Casa de Paz SLV, led by a woman named Gina Barrett, aims to provide holistic trauma support for new immigrants and asylum seekers at the border. “It was right up my alley,” says Shannon. She applied online for the January mission, which would be 10 days long.

As a student in college, it comes as no surprise that just one problem stood in Shannon’s way: affording the trip. Once she was accepted, Shannon decided to create a GoFundMe page for the cause. What happened next was far beyond what she could have predicted.

“From just donations, my plane tickets and accommodations were completely covered, and I had an extra $700 left to donate to the organization,” says Shannon. "A lot of people were interested."

Upon her arrival, Shannon was introduced to a yoga teacher, a yoga therapist, an art therapist, and a cognitive psychologist. Each therapist led both open and private sessions during the day, which gave people the option to engage in whichever area they were most interested in and even receive one-on-one support. 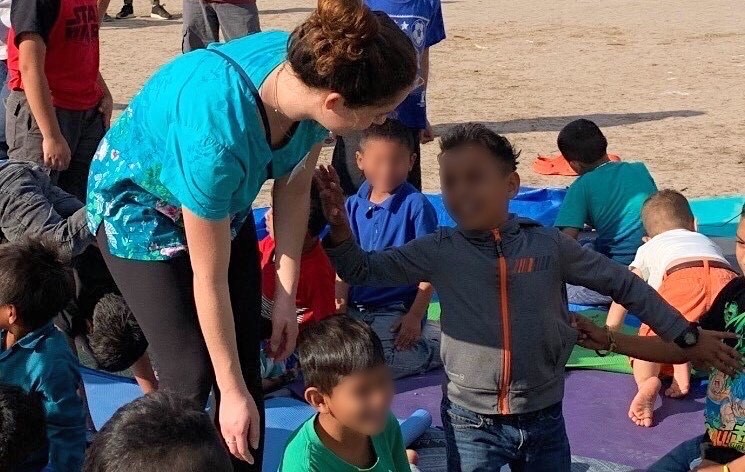 “I did a lot of art therapy with the kids… I’m not an Art Therapy major, so I had to kind of learn that on the spot,” she laughs. Childcare was a huge part of Shannon’s day-to-day volunteer work. “There were always a bunch of kids who would show up, which, I mean, was inevitable… there was nowhere for them to go.”

One moment that stuck with Shannon was actually during one of these art therapy sessions. They were doing an exercise during which participants were told to draw a place where they felt safe and at peace. "One girl drew a picture and then wrote, 'A place where I would feel safe is in the United States with the rest of my family.' Then she got really emotional and started crying... and then we all started crying. It was this emotional release, but also, it was the reality for most of the kids who were there," says Shannon. "A lot of them couldn't even really think of a safe place."

Through all the pain Shannon witnessed, there was also plenty of joy. "They were hugging us all the time, laughing, smiling,” says Shannon. "I could see myself in them, and it just doesn't make sense to me. Why was I not put in that situation? Just because I was born in this country doesn’t mean I have more of a right to a safe place to live."

Shannon ended up helping with more than just trauma support, as Casa de Paz SLV was not the only organization present. At night, for example, she would often help out with an organization called Team Brownsville as they served people dinner. Having seen firsthand what each of the organizations are doing, Shannon feels she can do a better job of promoting them going forward.

Above all, Shannon just wants people to know that doing something is better than doing nothing. “It’s tough to approach because I think a lot of the time, when we think about humanitarian crises around the world, it's overwhelming and can feel impossible to change because of the politics and all of the conditions that create it. It feels impossible to get to the root of it and change it in a big, meaningful way. And it is impossible for one person to do that," Shannon says.