Searching for an 'Honest Expression'

Lesley student and drummer Jonathan Mande has launched Drums and Wellness, a holistic program that helps others grow emotionally, socially and academically.

When his childhood was disrupted by civil war, when his mother disappeared, when he was bullied because of his African background, drumming was the one constant rhythm in Jonathan Mande’s life.

Now the 26-year-old student has launched Drums and Wellness, a holistic program that couples his love of percussion with his desire to help others grow emotionally, socially, and academically in ways he would have benefited from as a child.

Born in the Democratic Republic of Congo, Jonathan’s early childhood was marked by upheaval. He and his nine siblings lost contact with his mother when war broke out while she was traveling. Unable to return to the Congo, she eventually made it to the United States and was able to reconnect with her family, bringing all of her children to Brookline, Massachusetts.

Jonathan was 11 years old when he arrived in the completely new world of New England. The adjustment was anything but easy.

Jonathan had to learn a new language and culture, even as he was taunted and called names by his peers and left out of social activities.

“I remember going through school and trying to make friends and trying to explain things so people could understand me,” he says. “I remember having a really hard time and feeling not understood.”

The faculty at the Edward Devotion School, a public school in Brookline, were the only people who understood him, particularly his music teacher. In after-school drum sessions with his mentor, Jorge Albela Perez, Jonathan connected with the Afro-Peruvian rhythms that reminded him of Congolese drumming. The lessons also helped him in class.

From a Cinderblock Drum to Teaching Percussion

Jonathan first became infatuated with music at age five when he heard a song with a catchy drum intro. Wanting to imitate it, he crafted a makeshift drum of cinderblock, brick and cardboard, sticks made of bamboo, and a hi-hat brush fashioned from palm oil leaves.

“I heard a sound I wanted to replicate,” he recalls, “and then I did it and I kept following the urge to play more.”

At Devotion School, he clung to drums as a way to express himself and continued to play through high school and to Massachusetts Bay Community College. After a stint working with Outward Bound, a nonprofit that works with kids and adults through outdoor adventure-based education, Jonathan arrived at Lesley with the desire to help others and do something “bigger and beyond me.” 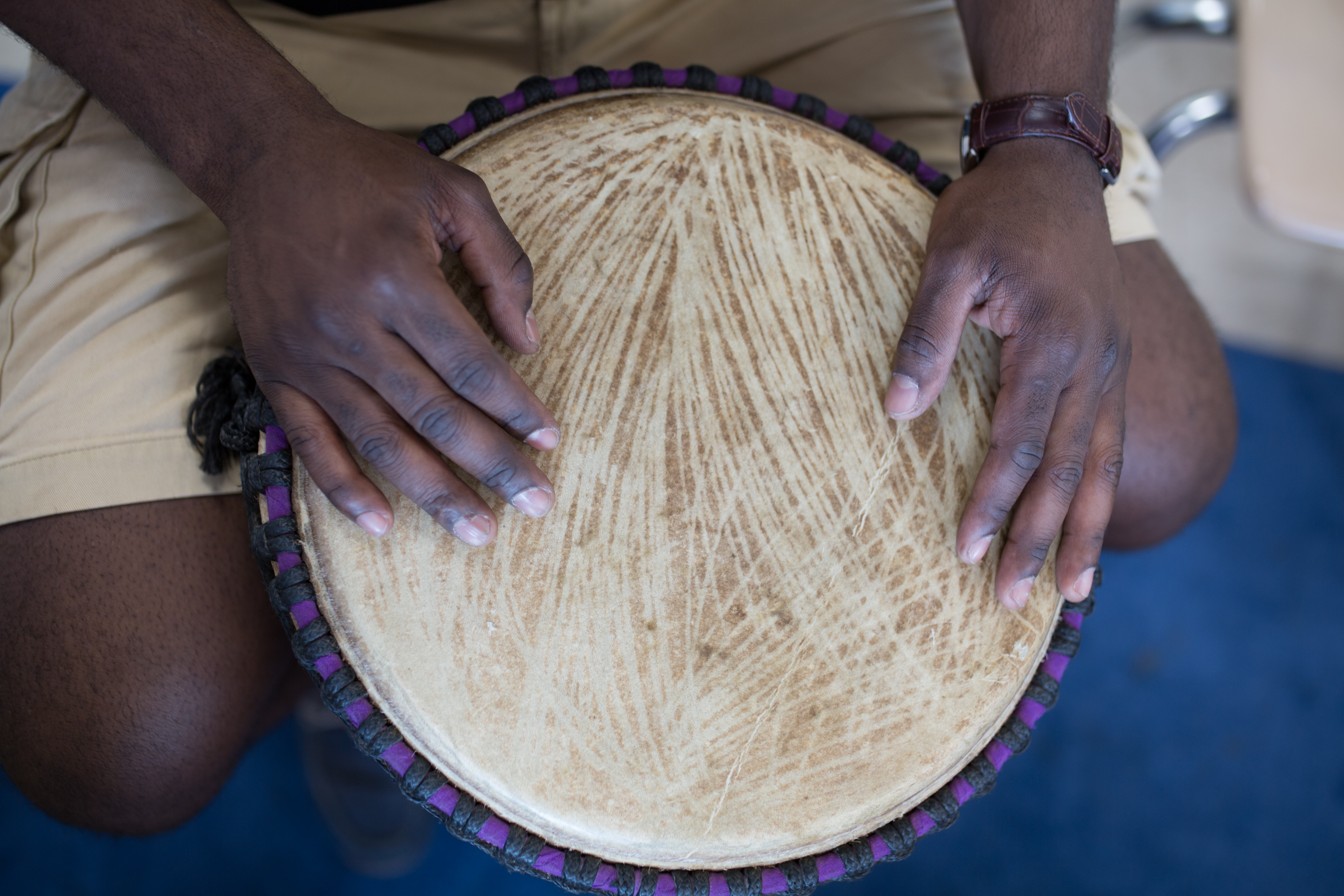 Still in touch with Jorge and other teachers at Devotion, Jonathan began to teach one-on-one drum lessons at the school, sometimes using the same instruments he’d banged on as an elementary student. Through these lessons, his Drums and Wellness curriculum took flight.

“He found some place of resilience for himself within music, and he really sees that as a tool for self-expression,” says Julianne Corey, Jonathan’s academic advisor through Lesley's Center for the Adult Learner, where he is designing his bachelor's degree to meet his career goals.

The Drums and Wellness curriculum is based on four pillars: listening, communication, collaboration and self-expression.

“I was trying to create something that was experiential, that was out of the ordinary,” says Jonathan.

He continued to develop the program, incorporating what he learned through his dual major in psychology and education, with a specialization in expressive arts therapies. The two disciplines are not usually combined until the graduate level, but Jonathan knew they would propel Drums and Wellness forward.

Jonathan primarily works with students one-on-one after school, and he begins each session by asking them about their day with questions like, “What color describes your mood?” They warm up with drumming and dancing exercises and create artwork together. And of course, Jonathan teaches the kids how to drum, but he does so while also reinforcing the four aspects of Drums and Wellness through drills such as call-and-response and improvisation.

“One of the things I hear from him a lot is how music allows students a way to communicate when they’re not always comfortable verbalizing something,” says Julianne. “That has got to have some underpinnings with his own upbringing and his own childhood experiences.”

Every activity teaches the children to collaborate, to listen and to communicate—as they drum and also in the broader contexts of school, home, the playground and beyond.

“You have to be listening—whether playing by yourself or with people on stage. The idea is to get in tune with your internal rhythm in order to understand that of the world around,” he says. “When we can be with other people, listen to what’s important, what matters, then what we’ll express is an honest expression.”

“In drums, when you have to split up a beat, you have to sequence it so you’re doing sequential formatting. That’s very mathematical because it’s pattern-based,” he explains.

Kids don’t necessarily realize how the drumming lessons help them, but third grade Devotion teacher Gretchen Albertini sees it. Although she never taught Jonathan, Gretchen remembers him well from his days as a student.

“He was really magnetic. From the time he arrived, you couldn’t not want to know him,” she says. “I think drumming was an equalizer in a lot of ways.”

One day toward the end of the school year, Gretchen invited Jonathan to hold a drum circle in her classroom. Her students sat in rapt attention as Jonathan brought in his cache of percussion instruments.

Once they got their itchy fingers on the drums, shakers, and djembes, Jonathan gave each child a chance to express themselves by tapping out their own rhythms, joining together one-by-one to create a cohesive performance.

“We have so many kids with so many different challenges that I think more and more kids need these sorts of forums like Jonathan is presenting,” Gretchen says. “What he’s about to do levels the playing field for every kiddo.”

Jonathan wants to do that for more kids and adults as well. Eventually, he would like to take Drums and Wellness to more schools and to community centers. He would also like to teach others how to implement the curriculum.

It has taken perseverance and self-acceptance for Jonathan to get this far, but he has no intention of slowing down now.

“The road getting to where I am right now had been really exciting, but it also has been difficult,” Jonathan reflects. “A long time ago I had to accept that, yeah, I learn differently, but that’s also my strength. I’m using that strength to really lighting a fire so I can help other people.”

Seeing Jonathan’s growth over the years, Julianne said she has no doubt he will continue to be a positive influence on whom ever he meets.

“There’s no question to me that he will do something with this work and take it really far.” 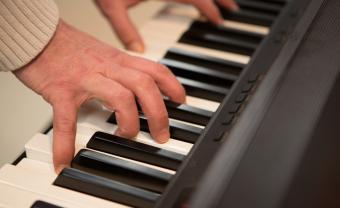 For Aki Ohmae '12, a master's degree led to a career as a music therapist in Tokyo, Japan.
Read more about Aki Ohmae

How to Develop a Successful Musical