Skip to main content
More at lesley.edu/plan
COVID-19 Protocols for Campus Access in 2021-22
Our three campuses are open for classes, activities, and residential living. Find the latest information on our health and safety protocols on our Plan page.
StoriesEnzo Silon Surin ’12

Publishing 'Poetry for the Broken Spaces'

The content of the chapbooks—from issues of racial violence to politics and the social climate—aren't always easy to read, but, says the Lesley University alum, they are necessary.

"Poetry matters and it matters all of the time. It's always relevant," says Enzo.

Last year, Central Square Press published the first volume of The Next Verse Poets Mixtape, a chapbook featuring the work of Melanie Henderson, Fred Joiner, Lisa Pegram and Enzo, who all happen to be Lesley alumni.

The inspiration for the collection stemmed from Enzo's youth in Queens, New York, when hip-hop artists used mixtapes to get the attention of music labels.

"The hope is, much like a record company picking up a mixtape...mainstream publishers will pick up this book and say, 'Let me find out who these folks are,'" he says.

"Poetry matters and it matters all of the time. It's always relevant."
Enzo Silon Surin ’12, MFA in Creative Writing

Enzo, who completed his MFA in Creative Writing in 2012, recently printed his own poetry collection, A Letter of Resignation. Similar to Mixtape, the chapbook was influenced by music—particularly the cadence of jazz, hip-hop, and the blues.

The poems reflect fear and uncertainty sparked by the birth of Enzo's first son as well as police shootings and the recent presidential election.

"Publishing and writing about it, for me, became a way to deal with it," says Enzo, an associate professor at Bunker Hill Community College. "Writing, for me, becomes a form of social action."

Enzo said many people live in the "broken spaces," where they are haunted by trauma, injustices, and fear. Failing to deal with those issues now means they resurface eventually, he says.

"One way to alleviate fear is to confront the source of that fear. I wanted to do that with this collection."

Reading the Declaration of Independence also helped Enzo realize that he isn't powerless. "The government gets its power, its consent from us," he says. "We elect them."

Still, he acknowledges that the poems he writes and the poems he publishes aren't something that can or necessarily should be read in one gulp.

Enzo says he, like many others, has to create emotional space to process tough topics, but emphasizes that it's important to be a part of the conversation. Verse is one way to enter into the dialogue, and Enzo advises: Take it "one poem at a time." 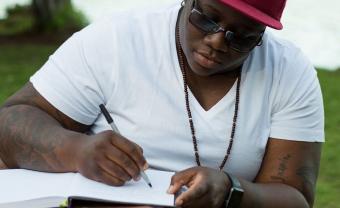 Working as a social worker inspires her stories and lets her "give a voice to others."
Read more about Aqueela Culbreath-Britt