Skip to main content
Save your spot!
Come to our Fall Open House!
Sunday Oct 16, 9 am - 3 pm: Come and see for yourself how you'll find your home at Lesley.
StoriesDevin Ferreira ’13

Mixing the Arts and Community

Music is at the center of Devin Ferreira's universe. It's also his day job. With a master's degree in Arts, Community, and Education from Lesley, he's carved out a career as a performing artist and as a music educator for inner-city Boston youth.

A born artist and creator, Devin Ferreira made his first mixtape at age 6, and was playing saxophone by the time he was 8.

"My passion for music has been a lifelong experience," he says.

After graduating from Lesley's Arts, Community, and Education program in 2013, Devin has embraced a full-time career teaching music and performance in Boston. As the performing arts director at the Mattapan Teen Center, run by the Boys and Girls Clubs of Boston, he teaches songwriting, recording and performing, along with dance and theater arts.

"I help host and participate in events across the city with my students who love music just as much as I do," he says. "I am very lucky to have such an amazing job that inspires me to wake up and truly live."

Making a Career in Music

Born in New Sharon, Maine, Devin was inspired by his mother, who has been a teacher for over 30 years, and he pursued an undergraduate degree in music.

"I didn’t have all the musical skills needed to be successful right off the bat, but through hard work, sacrifice and dedication, I mastered the saxophone, music theory, ear training and even sight singing," he says.

Devin successfully parlayed his degree into a career as an educator, creating music programs for inner-city youth in Boston. While working on these programs, he continues to focus on his writing and performing career. He releases mixtapes and performs regularly at open mic nights and local clubs, using a combination of hip-hop and soul to curate a unique style and sound.

He was immediately drawn to Lesley's Arts, Community and Education program.

"When I was teaching my first youth music program at Camp Harbor View in Boston Harbor in 2010, I realized I wanted to take my community arts work to the highest level possible," he recalls. "I started researching potential graduate programs and my supervisor at the time told me if I wanted to pursue a master’s degree in anything community-art related, the best choice was Lesley University. I visited all the potential schools and no one gave me a warmer welcome than Lesley."

Devin says his work in the Community Arts program was life changing.

"The community arts program dramatically changed my perception of community arts, culture, and honestly, my view of life in general," Devin says. "Many of my classes brought me to a level of understanding that I had never experienced before. They allowed me to gain perspective on racial inequality, racism, white privilege/guilt, discrimination, economic imbalance and how the arts play a key role in bridging communities and creating cultural understanding."

During one of his open mic night performances in Jamaica Plain, Devin was spotted by a WBZ creative director and they cultivated a friendship that ultimately led to an opportunity to pen the theme song for the 2016 Boston Marathon.

Through a partnership with WBZ and CBS, he released the song "Unstoppable," a heartfelt anthem to motivate the tens of thousands of runners navigating the 2016 Marathon.

"The opportunity to pay homage to the marathon and the great city of Boston was something that truly inspired me," Devin says. "I worked for over a month writing the lyrics and music for the project, and I revised the song over 30 times."

WBZ filmed an "Unstoppable" music video and Devin also appeared on WBZ-TV Channel 4 news to describe how he created the project and share his inspiration behind the music.

"My mom and dad, family, friends and high school classmates know that I have been working towards this my entire life," says Devin, who is a two-time Boston Marathon runner himself. He used that insider’s perspective to provide encouragement to fellow athletes on the notoriously difficult course.

"Running is exhilarating and so is music," he says. "Music can enhance the running experience and add a sense of rhythm to your pace. For me, running can also inspire music. Many times when I run I am thinking about my next best song, or I’m thinking about a song that inspires me to keep putting one foot in front of the other."

Devin also wrote the theme song for a non-profit boxing initiative called Haymakers for Hope, where he again partnered with WBZ to raise money for cancer research. He released an album, "Urban Classic," and he’s lining up future performances.

Students in a graduate arts and education class use recycled books to create journals that explore the environment and the arts.
Learn more about this book journal project. 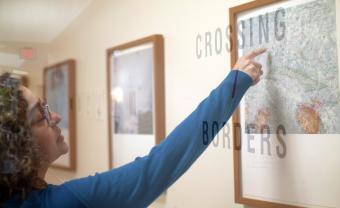 Professor Vivian Poey grapples with immigration in her art and through her teaching.
Read more about Vivian Poey