A Sea Change in School Discipline

During his first month as a grade-school teacher, Dan Losen sent a dozen kids to the principal’s office to be disciplined. The principal finally took him aside and said, “Dan, you’re losing your authority with these kids.” Losen knew she was right. Fortunately, his school required training in classroom management. By his last year of teaching, he says, “It never occurred to me to send kids to the principal’s office.”

Losen received training and support, but not every teacher is so fortunate. In urban school districts across the country, overwhelmed teachers are sending more students to the principal’s office, and more principals are punishing students—often for minor infractions—with out-of-school suspensions. The 2016 nationwide suspension rate for high school was 16 percent, with an estimated economic cost of over $35 billion dollars in lost tax revenue and more government spending on health, social services, and the justice system (source: Civil Rights Project).

Suspension was once viewed as a policy of last resort—a tool to remove violent students from school. All that changed in the 1990s with zero-tolerance discipline policies, which often forced principals to exclude students for lesser offenses including dress-code violations, cell phone use, and swearing.

“Suspending students isn’t a solution,” says Losen, who holds an M.Ed. from Lesley University and now directs the Center for Civil Rights Remedies at the University of California at Los Angeles. “If suspension worked, we’d see improvements in academic achievement or higher graduation rates, but we’re not seeing that.”

Instead, Losen’s research shows an unintended consequence: higher suspension rates for students of color and those with disabilities. “These students are among the most vulnerable, the most at risk for dropping out and getting into trouble with the law,” he says. “And when you don’t finish school, your life opportunities are severely diminished.”

Losen and others argue that the problem isn’t the students—who, along with their families, face the daily pressures of poverty, crime, discrimination, unemployment, and lack of health care. The problem is the adults—poorly prepared classroom teachers and school officials adhering to zero-tolerance policies.

"Losen’s work serves as a stark reminder of the systematic impact of bias toward our most vulnerable children. The sheer numbers of children of color who are subject to excessive discipline and ultimately funneled into the school to prison pipeline is in itself a form of state-sanctioned neglect. My hope is that, armed with data, districts will act and make a difference."
Dean Jonathon Gillette, Graduate School of Education

“When kids misbehave, it’s a sign they’re not engaged, that they’re struggling. But these students are written off as incapable of learning, or ‘bad,’” Losen says. Urban schools often don’t have the resources, or have not made it a priority, to get to the bottom of why kids aren’t learning, he says. “The easiest path is suspension, so schools don’t have to provide services.”

Losen uses the power of data—including rates of suspension, dropout, graduation, arrest, and other indicators—to raise awareness of the consequences of harsh disciplinary measures. To make the data available to more school districts, the Center for Civil Rights Remedies launched a new web tool that sorts U.S. Department of Education data on suspension by race, ethnicity, gender, English learner, and disability status across nation’s districts.

Policymakers are starting to pay attention. Michael Thompson, director of the Council of State Governments Justice Center, was quoted in a news report as saying, “Everybody recognizes that if we want to find ways to close the achievement gap, we really need to look at the huge number of kids being removed from school campuses who are not receiving any classroom time.”

Slowly, through Losen’s work and that of other reformers, school districts are beginning to modify or drop punitive policies and are considering increased behavioral support for students and training for teachers. These districts include Los Angeles, Baltimore, Chicago, and Denver. Schools that have ended zero-tolerance policies have already seen significant drops in suspensions.

More districts are exploring alternative practices for disciplining students. Among the promising alternatives is “restorative justice,” which seeks to understand the underlying factors causing the misbehavior. Restorative justice provides a safe space for those in the school community to have a say in resolving the conflict and determining the appropriate consequences. Instead of being suspended, a student might be asked to write an apology or perform community service or attend an intervention program.

While suspension often results in a negative impact to the community—unsupervised students getting into trouble and being arrested—restorative justice strengthens community. “It aims to make the community whole,” Losen says. “It calls on the community to understand and embrace the person, instead of shunning him. It says: ‘We care about you, but we’re also holding you accountable.’”

Losen points out that discipline starts in the classroom. From his experience as a teacher, “If things aren’t going well, it’s vital to look at what you’re doing that might be contributing to the situation,” he says. His training helped identify what he could do to manage his classroom more effectively. “I learned that you need clear expectations of behavior, you need to catch kids doing things right, and you need to invest in your relationship with the kids and their parents.”

His research shows that improving relationships with students pays off in dramatically reduced discipline referrals, and ultimately, in the number of suspensions. “When we take a more compassionate approach to disciplining students, while still holding them accountable, we’ll begin to see changes to the tremendous inequities in our educational system.” 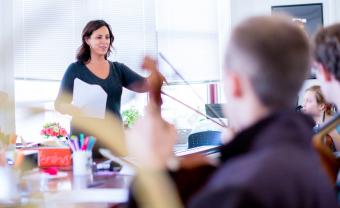 As program manager of "From the Top," Shea helps young musicians find creative ways to share music with others.
Read more about Shea Mavros
Article

Thinking about leaving your career to become a teacher? Here are some tips from Lesley graduate alumnae who had earned bachelor's degrees in a non-teaching major, worked in a career, then answered the call to teach.
Learn more about changing careers to teaching. 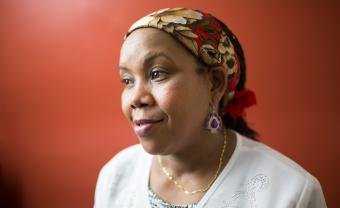