Skip to main content
More at lesley.edu/plan
Fall 2021 Reopening Plans
We will reopen our campuses for classes, activities, and residential living in Fall 2021. Find the latest information on our Fall 2021 Plan page.
StoriesAsiya Shaikh ’21

A Future Teacher Makes the Case for the Liberal Arts

Asiya Shaikh '21 plans to use the skills and knowledge she learned in her English and Global Studies classes to inform her teaching.

Asiya Shaikh always knew that she wanted to be a teacher, but she resisted pressure to go into the sciences when it came time to apply to college.

“It was really funny because I come from a family of pharmacists, they're all STEM—all my uncles, all my aunts, my dad...,” Asiya recalls. “My mom teaches at our mosque—she was the one person who said teaching is a great idea. But everyone else was like ‘STEM, STEM, STEM.’ And I was like, no. I'm not bad at STEM, it was just not something I was interested in.”

Asiya’s passion was for teaching children.

“When I was looking for colleges, I had heard really good things about Lesley's education program. So many of my teachers at my high school had gone to Lesley for their master’s programs.”

And she excelled in English classes.

“I really love doing close analysis of text. I just love to read something and dissect it and pull out arguments, so for me, writing papers and things like that just came so easily. I was terrible at poems, but I still have fun analyzing poems.”

Using the liberal arts to develop as a teacher

An English and Elementary Education dual major at Lesley, Asiya credits her liberal arts coursework with helping her develop strong critical thinking skills that she hopes to pass on to her students.

“Everyone thinks that you don’t start thinking critically until high school, but in reality, even little kids—I’m noticing this in my first grade teaching placement—are always questioning,” she says.

She applies the same critical thinking skills she uses as an English major to her work as a student teacher, encouraging students to read texts and look for evidence and observations.

“That helps them become citizens of the world at a young age,” she says “It also helps them later on when they’re in classes, and they have to write their own papers. It helps them academically, but also just developing as people.”

To round out her preparations to become a teacher, she added a Global Studies minor her sophomore year.

“I wanted to know more about different cultures and more about where my students might be coming from in the future,” she says. “You don't know what kind of situations the kids and their families in your classroom will be coming from.”

She adds, “I realized more recently how important it is to stay up with current events in the United States as an educator because the things that are happening are impacting your students; they're impacting you and the way you learn. It helps me understand those intersections of education and politics.”

Asiya’s stellar work earned her a position as the president of the English Honor Society at Lesley and a work-study job as a teaching and research assistant with Professor Mary Dockray-Miller, who teaches classes in the English major core, medieval studies, and the history of the English language.

Asiya co-authored a paper on the connections between a liberal arts education and political and economic power. The paper, which appeared in a monthly newsletter for librarians, publishers, and faculty in the humanities called Oh, the Humanities!, addresses concerns that the U.S. is developing a two-tiered system of higher education: a set of elite schools that offer majors in traditional liberal arts and sciences, and a second tier of schools that offer more technically or professionally focused majors.

Smaller colleges and public universities have been cutting their liberal arts programs for years in favor of more “practical” majors, Mary says, but recent economic stress has accelerated the urgency of the conversation.

“We were on this trajectory where undergraduate education was consistently devaluing the humanities, and then that devaluation accelerated because of the pandemic,” says Mary. “And all of a sudden, it wasn’t just like ‘oh, we have to trim the history major’—it's ‘we have to get rid of the history center.’ And I was very concerned about this. It seems to me that there’s a class issue here; there’s an access issue here.”

“It’s the students of color, the first-generation students, the students on Pell Grants, who are losing this opportunity to major in political science and history and Spanish literature and women's studies. And that made me really angry.”

Mary has seen firsthand during her decades at Lesley the “wonderful crossover” of weaving together the different strands of a liberal arts education.

“I love to bring visual arts in because I think the visual arts and the literary arts speak to each other in so many interesting ways,” says Mary, who teaches in our College of Liberal Arts and Sciences.

This notion is embodied in the “Text and Image” course she co-teaches with art professor Anthony Apesos, who teaches in our College of Art and Design.

“We choose a major canonical text and I do the literature part of the class and he does the art history part,” she says. “Last semester, we did Homer’s ‘Odyssey’ and he did the art historical tradition of illustrating the ‘Odyssey.’ We've done ‘Paradise Lost’ and Derek Walcott and we’re talking about doing Dante.”

Harnessing the power of writing, research, and critical thinking

As Mary wondered how to demonstrate the emergence of a two-tiered system of higher education, she tapped Asiya to help demonstrate that liberal arts majors are gateways to power by examining the U.S.

Asiya researched the undergraduate majors of all U.S. senators, finding that nearly three-quarters of them were liberal arts majors.

“There’s only one member of the Senate—Marsha Blackburn of Tennessee—who majored in home economics,” Mary notes. “There are a couple of engineers, a couple of doctors, but a lot of political science, history, and economics. So it was very interesting to me, and also that even if the school was not an elite school, the major was almost always still a liberal arts major.”

Asiya shares her professor’s dismay at both the devaluing of liberal arts and the inequities she was seeing.

“I was sad that people didn’t see a value in history or English. And it was weird to me that people couldn't see it, because I could see the value of it in our current society so much, especially over the summer, with all the Trump stuff, the Black Lives Matter stuff. I saw the things I learned and the things that I would come across in my history and English classes—I saw them play out in real life… I would see things in the news and think—history is literally repeating itself.”

Having finished her senior thesis project on author Toni Morrison, Asiya is spending her final semester student teaching and studying ways to support English language learners in her classroom and apply her global studies knowledge.

She’s grateful she chose a school like Lesley that places a high value on the humanities.

“We need to start improving ourselves and changing society, and you’re not going to do that if you get rid of liberal arts.”

Learn more about the liberal arts at Lesley

At Lesley University, our 25+ liberal arts bachelor’s degree programs and reimagined general education curriculum are designed to help you go out into the world and do something meaningful. Study education, counseling & applied therapies, history, English, creative writing, social work, and more. Combine your major with one of 45+ minors to create a degree path that is your own.

As an English major, you can choose one of these optional specializations: 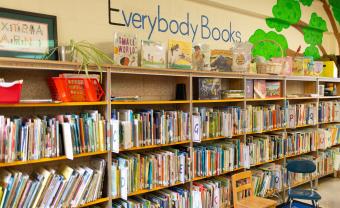