Uncomfortable truths rhyme in ‘The Smuggler’

Faculty, playwright Ronán Noone’s latest work puts one man on stage and everyone on trial

“It’s about one man who loses his dignity and feels humiliated because he can’t provide for his family, and ends up working on a site with undocumented immigrants and seeing an opportunity to exploit their labor,” says Noone.

Like the playwright, all of his plays are “fiercely political.”

In the ’90s, Noone moved to Martha’s Vineyard, bringing his first play, “The Lepers of Baile Baste,” with him. Unsure how to get the play to the public, it languished in a drawer for five years until Noone submitted it to Boston University. With the help of Nobel Laureate Derek Walcott and director Kate Snodgrass, the university’s Boston Playwrights’ Theatre produced “The Lepers,” a fictional account of sexual abuse in the Catholic church.

The prescient play debuted in 2001, before the Boston Globe’s Spotlight team broke the story of decades of abuse and neglect in the church, and won the Kennedy Center National Playwriting Award. It also solidified Noone’s place in the Boston theater scene. Since then, Noone has written six other plays, including “The Atheist,” “Little Black Dress,” and “A Small Death.”

As with many of his plays, “The Smuggler” deals with the Irish experience in America. The one-man play, written completely in verse, draws from Noone’s days on the Vineyard, when he worked with immigrants both documented and undocumented in food service and other roles.

Their status also meant they were more vulnerable to mistreatment, something Noone homes in on in “The Smuggler.” The play’s dark humor is designed to make onlookers feel both amused and culpable for their own part in the exploitation of undocumented workers as the main character, Tim Finnegan, enters the business of human trafficking.

“Sometimes that’s not appreciated,” Noone says, with irony. The actor in the sold-out Washington D.C. production of “The Smuggler” was called a fascist by one person, according to Noone. But a strong reaction is exactly what the writer is looking for.

As a playwright, “you want to open up ideas and have people talking and maybe change people in a way,” he says. “Storytellers capture our history and who we are, and try to curtail all of that and give it back to an audience and hopefully allow it to resonate so we can see ourselves in a different light, or at least improve the way that we move forward in the world.”

While this would be weighty enough to take for most playwrights, Noone took “The Smuggler” a step further, writing it entirely in rhyme, an idea that took shape when he was already three-quarters of the way finished with it. The verses contribute to the play’s humor and the overall message.

“You won’t forget it,” says Noone. “There’s a spectacle in watching somebody try to remember 9,000 words in rhyme while telling a clear, focused story that makes you feel both disturbed and committed.”

“The Smuggler” makes its Boston debut this month at the Boston Playwright’s Theatre, starring Billy Meleady. The show runs Nov. 7-24.

Learn more about the MFA in Creative Writing program.

A writer discovers his dark side 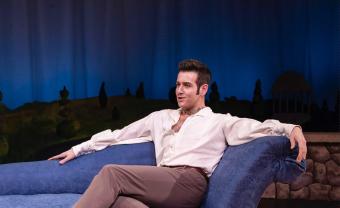 In this episode of Why We Write, Cheryl Eagan-Donovan talks about her documentary, which posits that an A-list playboy was the real Shakespeare.
Listen to Cheryl Eagan-Donovan's podcast episode
email facebook twitter
29 Everett St, Cambridge, MA 02138
617.868.9600