Jim Wilbur has tirelessly championed the Threshold Program and its students

Ty Williams is a different person from the young man who arrived as a student at the Threshold Program. 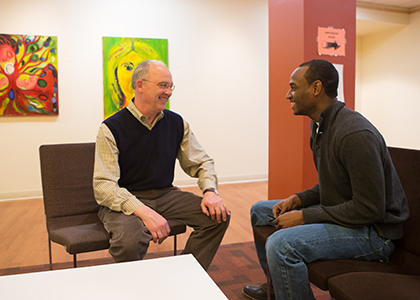 During his time at Lesley, he ran on the track team, made strides in the classroom, and served as a peer leader to newer Threshold students. Now he works as a bellman and valet at Boston hotel.

“Threshold helped me accept my struggle. It helped me appreciate that, yes, I have a learning disability, so how am I going to deal with it?” said Williams, who graduated in 2014.

He credits, in part, the unwavering guidance and support of Threshold Program Director Jim Wilbur, who retires in June after dedicating 25 years to Threshold, a campus-based program for highly motivated young adults with special needs. Williams describes Wilbur as playing a role like that of both a brother and a father to him, and still calls on him for advice.

“Jim never stops smiling,” said Williams. “I have seen him help students through a lot.”

Wilbur came to Threshold in the early 1990s as admissions director, and became the program’s director in 2002.

He has tirelessly championed the program and its students, and has been a driving force behind efforts to upgrade the facilities, build an alumni center, and enhance the employment resources for Threshold graduates.

“Jim’s legacy is his leadership, humor, compassion, passion and his ability to know when to push someone and when to hold someone,” said David Newton, parent of Threshold alumnus Det Newton, who graduated in 2010 and is a tennis pro at a local country club. “There is a whole group of young people doing things that they thought they could probably never do, and doing things not only for themselves, but for the communities in which they reside. It’s been transformational.” 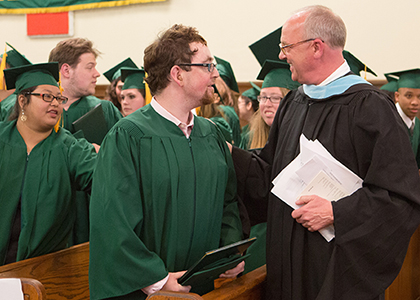 Threshold, founded in 1982, was the first college-based program in the nation to offer comprehensive vocational and life skills for highly motivated students who have diverse learning challenges and other special needs.

Wilbur, who had a brother with Down Syndrome who died very young, was always interested in serving this population and began volunteering during college at a day center for individuals with severe disabilities.

“I just really like working with this group of people,” said Wilbur. “They are such survivors. So many wonderful students have come through this program.”

It has been a fulfilling career to help young adults realize goals that they didn’t think were possible.

“Many of our students have high-achieving siblings and families, and they are aware of what it’s like to have no peer group, which is one of the miraculous things that happens to them here,” said Wilbur.

People with disabilities statistically face limited employment opportunities and high unemployment rates, and Wilbur and his colleagues have made job training and employment skills a tenet of the Threshold education.

“Our kids come in terrified, and they leave independent and feeling good about themselves,” Wilbur said.

He praises the “phenomenal” faculty and staff – many of whom have worked in the program for decades – who teach vocational skills, independent living, and social/psychological development, including how to navigate the medical system and public transportation, adult sexuality, cooking, personal finance and online safety. Students study in either the early childhood education or business services tracks during the two-year program, which is often followed by a third transition or bridge year.

“The goal is to graduate not just with a job, but a job they feel good about,” said Wilbur. 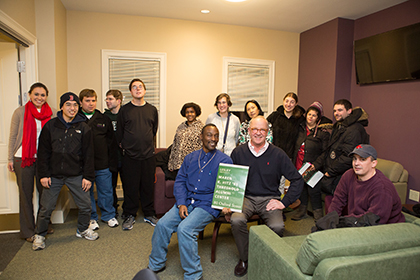 From 2013 to 2015, the university undertook a series of major renovations to four Threshold buildings on Oxford Street in Cambridge, bringing the facilities in line with Threshold’s highly-respected programming.

“It was Jim’s persistence over the years that drove the renovations,” said Threshold parent Newton, who serves on the Threshold parent advisory committee. “He was able to work with what he had because he had such a passion for the students, but he also recognized that the program had to be properly accommodated with better space, and there had to be an alumni connection after graduation.”

The new facilities include more common areas and a new teaching kitchen, accommodating students of all disabilities and levels of mobility. Designed with increased energy efficiency, the new ADA-compliant facilities have further strengthened the sense of community within the Threshold Program and provided students with more opportunities to build independent living skills.

“Jim has always been a terrific advocate for the Threshold Program, and he has been instrumental in addressing students’ needs,” said President Joseph B. Moore. “His passion and commitment to the students extend beyond their time at Lesley, and he has been integral to both the program’s success and the graduates’ success.” 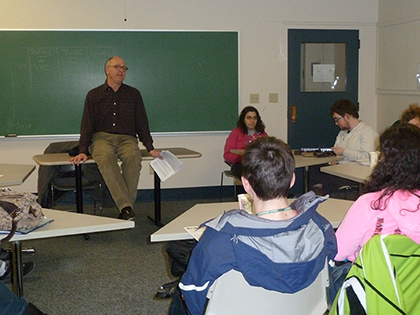 During his tenure, Wilbur has also served as a mentor to students through weekly meetings and other supports. Plus, he teaches the current events course.

He and his staff have worked to ensure that the program provides both academic and social opportunities for students who were often marginalized in school. The Threshold experience is underpinned with a sense of home, a feeling of security and high expectations for the students.

“He provides a safety net, but he doesn’t coddle anybody,” said Newton.

“None of that sing-songy stuff,” Wilbur quipped. “Just tell them directly.”

Wilbur has fostered key partnerships for the program and encouraged parental involvement at Lesley.

“Through his engagement with parents, there are now four Lesley University Trustees whose kids have gone through the Threshold Program,” said Newton, who is a trustee. “Jim’s efforts ensured that, at the very senior level, that connection existed, and that the program is integrated into the institution and part of Lesley’s overall mission and strategic plan.”

The new Threshold Alumni Center serves the 600-plus graduates of program. Wilbur says building an alumni center was key.

“Our population needs ongoing help with jobs, benefits and social security,” Wilbur said. “We have graduates who are in their 50s.”

It’s clear that the Threshold community ties are powerful, long after graduation. Students gather and alumni regularly return every Saturday for the weekly Threshold basketball games, played at the nearby Baldwin School in Cambridge. Wilbur often goes to cheer the students on – and says he will still be found there from time to time, even after he retires, to connect with the graduates who have deeply impacted his life, too, like graduate Ty Williams.

“Threshold has made a big difference in my life,” said Williams, “and Jim inspired me to shine.

A Video Tribute to Jim Wilbur