“The Court and the World”

Supreme Court Associate Justice Stephen Breyer launched the 2016-2017 season of the Lesley University Boston Speakers Series at Symphony Hall last night, illuminating the ways that the shifting global landscape impacts the courts, posing provocative questions, pulling a pocket-sized Constitution out of his blazer for illustration, and working to demystify the job of Supreme Court justice. 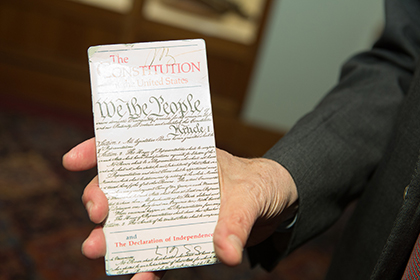 Supreme Court Justice Stephen Breyer had a pocket-sized
Constitution in his blazer that he used for illustration during his talk
in Symphony Hall.

Breyer’s talk incorporated key messages from his recent book, “The Court and the World: American Law and the New Global Realities,” which examines how U.S. courts should respond to the ways that interdependence and globalization influence the law.

President Bill Clinton appointed Breyer to the Supreme Court in 1994, at which time about five percent of cases required the justices to understand global issues and law, Breyer recalled. Today it’s around 15 to 20 percent of cases, he said, noting that there are more than 2,000 treaties that pair distinct nations and organizations, each with its own sets of rules and bureaucracy – whether it’s an international olive oil council or an international whaling commission.

“Now we have to know more about what goes on outside the United States of America,” he said. Breyer added that judges need to become more attuned to legal thinking outside the country and to give more consideration to the implications of American legal decisions on foreign nations in areas like national security and trade. He also asserted that international briefs can inform better American legal decisions.

“We are engaged in an ongoing experiment,” he said of American democracy, which is best protected by drawing from a broader scope of ideas rather than an insular one. 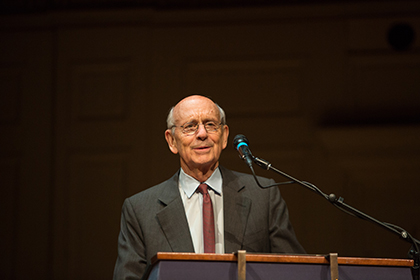 President Bill Clinton appointed Breyer to the Supreme Court in 1994.

Breyer described the role of the legal system in protecting society by sharing a metaphor by French philosopher and author Albert Camus.

“The plague germ never dies, it just goes into remission,” Breyer said. “It lurks in the cupboards, in the bedrooms, in the files, in the hallways, for one day to reawaken and once again — for the education or for the misfortune of mankind — send its rats forth into a once happy city.

“What we’re doing is one weapon — one, not alone successful — in an effort to keep that plague germ from reawakening. And it’s called rule of law.”

The plague is lawlessness with its resultant chaos.

During the Sept. 11, 2001, terror attacks, Breyer said that he and Associate Justice Sandra Day O’Connor (who retired in 2006) were in India, where they were treated with kindness and support. That experience inspired a profound revelation about the rule of law. 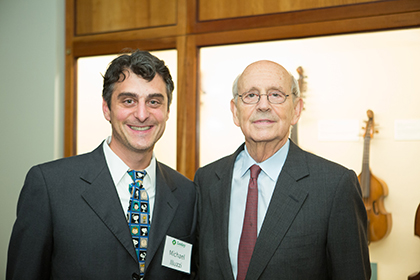 Then there is the complicated issue of the rule of law during wartime, when the courts step back, he said, recalling the Roman philosopher Cicero’s assertion that in a time of war, the law falls silent.

But placing national security over the law is fraught, he said, citing examples of how civil liberties have been jeopardized in wartime, such as the passage of the Alien and Sedition Acts in the 1700s, civilian imprisonment during the Civil War, and the internment of Japanese-Americans during World War II.

He recalled a landmark wartime Supreme Court case, Korematsu v. United States, concerning the constitutionality of interning Japanese-Americans, in which the court sided with the government in a 6-3 decision.

“These are the justices who later found for the plaintiffs in Brown v. Board of Education,” said Breyer. “... There is Cicero, right back on the Supreme Court.”

More recently, after the Sept. 11 attacks, the Supreme Court ruled in 2004 that terror suspects could not be held at Guantanamo Bay, Cuba, without the right to challenge their detention. Breyer recalled the words of O’Connor, his fellow justice, who said that a state of war is not a blank check for the president.

“Well, if it’s not a blank check, then what kind of check does it write?” he posed.

On the one hand is Cicero’s perspective; on the other hand is the civil liberties perspective reflected in the Guantanamo ruling.

“We have no secret source or absolute correct answer,” said Breyer, who noted later in his talk that “we’re not heroes, we’re humans. Judges, sometimes we’re wrong.”

In the face of mounting international terrorism, these tensions and challenges will only increase. All the more reason that jurists need to understand issues beyond our shores, and work to “bring into harmony” U.S. and foreign laws, he said. 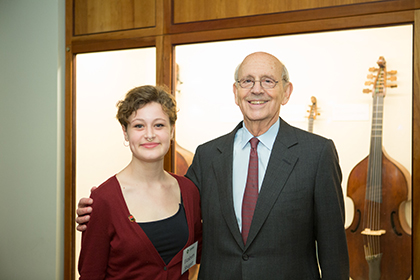 As a member of the Supreme Court, Breyer wants people, particularly young citizens, to understand the work the court does, and not have the judicial process be “seen as a black box.”

“My attitude is the more they know, the better,” he said, emphasizing that oral arguments are one small, albeit thrilling, component of each case, for which the justices also tackle in-depth reading and face difficult choices between compelling positions.

“We are afraid that other opinions will somehow weaken our values,” he said. “I say, ‘Read what the cases are actually about.’ ... Maybe the best way to preserve our American values is to participate.”

He gave a personal example to demonstrate the value his family places on understanding history and civics when he explained that his wife, Joanna, told each of their five grandchildren that anyone who learns Abraham Lincoln’s “Gettysburg Address” gets $20.

As part of the evening, Breyer participated in a Q&A session, for which audience members submitted written questions during the lecture. The session was moderated by Jared Bowen, executive arts editor of WGBH News, Lesley’s media partner for the Boston Speakers Series. 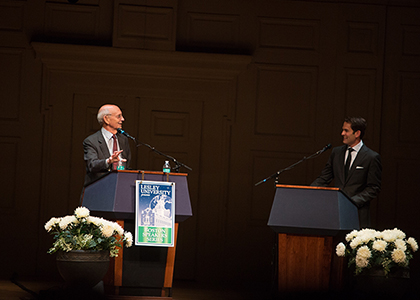 Breyer answered questions about term limits for justices, and weighed in with pros and cons in the debate to televise Supreme Court cases. But he demurred when asked about issues that may come before the court, or what he thought about Associate Justice Ruth Bader Ginsburg’s comments criticizing Republican presidential nominee Donald Trump.

When asked about Antonin Scalia, the conservative justice who died earlier this year, Breyer said the court can do its work with eight justices, but there is a void.

“Personally I’m sad. We were good friends,” said Breyer. “We probably agreed on more things than you think.”

When asked if he has any advice for the next president on whom to nominate to the vacant Supreme Court seat, Breyer said “It’s not my job,” and quipped, “It’s like asking for the recipe for Chicken a la King from the chicken.”