The campaign for civic engagement

In the weeks leading up to the presidential election, Iliana Valentin ’20 is taking to YouTube to fight fake news and educate voters in Boston’s immigrant communities.

Valentin is one of about a dozen people producing weekly videos under the moniker Informed Immigrants and Allies. Each week until the election, they are researching and then discussing big topics such as the economy, immigration and the presidential election, with a particular focus on reaching the Latinx community. Episodes are recorded in English and translated into Spanish by Valentin and others on the team.

“Our goal is to educate people on what is happening and the things that they’re not being told about because they’re not accessible in their language,” says Valentin, a secondary education and English double major who hails from Chelsea.

Valentin would like more Latinx voters to understand the issues at stake in the election. She says many of them have strong religious beliefs and discount former Vice President Joe Biden and Democrats as anti-religious, while assuming President Donald Trump, as a Republican, is a Christian whose beliefs align with their own. As a religious person herself, Iliana disagrees and she hopes to use the platform to address similar issues.

Her understanding of the community, as the daughter of Puerto Rican immigrants, is one reason why her former high school teacher and community organizer, Jared Wright and Jose Palma, respectively, invited her to join the project.

This isn’t Valentin’s first foray into activism. In high school she participated in an activist theater group, writing scripts and poems about world issues important to the troupe and performing them. She continued to be interested in social justice and encouraged her family, friends and community to be involved as well. The commitment to civic engagement in her own family reflects that of the community in which she lives: while her dad never fails to vote and is a frequent poll worker, one of her brothers isn’t even registered to vote, despite prodding from his little sister.

“So many of us desire to see change happen, but it might seem daunting to create change,” says Valentin. She wants people to understand that they can start where they are, with their own spheres of influence, no matter how small.

Episodes begin with an introduction to the week’s topic followed by a panel in which each member examines a well-publicized myth, many of which motivate people to vote against their own interests, says Valentin.

Informed IAA has discussed claims that both major-party candidates are equally dangerous to the United States, that individual votes don’t count and the conflicting ideas that immigrants are freeloaders and conversely stealing Americans’ jobs.

As immigrants, the children of immigrants and allies, the Informed IAA team hopes they make a convincing argument and that their message is one that will increase civic engagement in immigrant communities. 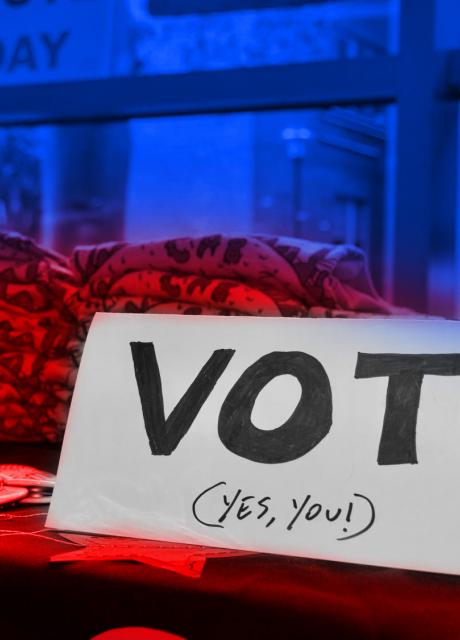 Read more about this student organization.

Watch local and state elected officials and leaders discuss systemic voter suppression in the context of the pandemic during this LesleyVotes 2020 event.
See the panel discussion here
News

Panel of elected officials and other community leaders say voting is a necessary first step toward fostering change, particularly for people of color