For the 14 high school students in the Transition HOPE Summer Institute, the message wasn’t that they should go to college but that they could.

“The institute is really about exposure,” said Janelle Ridley, Boston Public Schools district coordinator for system-involved youth. “The goal … is not for me to say that you have to go to college, I just want you to know that you can if you choose to.”

The institute introduced students to seven colleges and universities in the Boston area, including a week at Lesley University.

All of the teens, ages 14 to 18, are “system-involved youth,” meaning they have been in child welfare programs, the juvenile court system or both. It’s a category in which many Boston youth find themselves, and as Ridley explained it, “it’s another layer of an obstacle for them to be successful.”

With Transition HOPE (an acronym for High expectations, Opportunities, Purposeful Pathways and Expectations), Ridley wants to overcome those obstacles, disrupt the school-to-prison pipeline that plagues disadvantaged youth and help her students find purpose.

Lesley Associate Professor of Education Beverley Cush Evans connected with Ridley during the inaugural institute last summer, which was held at a juvenile facility. A former social worker, Dr. Evans was excited to bring students to campus this year, where they learned about Lesley while also delving into social justice issues and discussing their own trauma.

In bringing the program to Lesley, she had the support of faculty, staff and students.

“I was proud of Lesley’s participation with the program because it demonstrated, in a very fundamental way, our belief in encouraging and helping those who need a hand of support,” said Dean of Students Nathaniel Mays, who welcomed the students with dinner and snacks each afternoon.

The students learned about drama from Professor Annie Pluto, stop-motion animation from Javier Barbosa at our College of Art and Design, social justice from Jacy Edelman and Sue Cusack in our makerspace, and read faculty Jason Reynolds’ young adult novel “Long Way Down,” in which a teenage boy faces gun violence and contemplates revenge.

Students worked on plans for their own summer projects focused on a topic that combined their interests with social justice. One institute-goer created a plan for a drama-focused summer camp that would be a haven for kids experiencing challenges at home.

“We gave them the opportunity to see what they can do,” said Evans. “We were consistently giving the message that you can be here, you can do these things. You can be successful.”

For student Nevaeh, discussions on social justice were a chance to share her thoughts on society and the black female experience.

“I like how they asked us questions about our society and asked us to speak and talk about our goals in life,” said Nevaeh, who wanted to develop her public speaking skills during the institute.

Several students were reluctant to join Transition HOPE but started to feel engaged as the weeks progressed.

“I want to go to college, I think, but I’m not sure what I would like to study,” said Anejia. “The program … is giving me a boost.”

Richard, another student, doesn’t plan to go to college, but joined the institute because, “I need to do something new, try new things.”

A self-taught DJ, he wants to pursue a career spinning reggae music.

“We will be working on finding paths for Richard to have access to really do that and have it take him somewhere,” Ridley said.

Mentorship is a big part of Ridley’s work and the purpose of the institute. It’s also what brought Nancy, a junior at Regis College, to the program as a supervisor. Ridley, a school counselor when they met, began mentoring Garcia after her mother’s death.

“She never gave up on me, even when I pushed the adults away,” Garcia recalled. A social work major, she helped guide the Transition HOPE students throughout the summer.

“My hope is for them to find a purpose, just as Ms. Janelle has taken the time to do with me. I want to make sure that these kids leave this program with a purpose,” said Garcia.

For Andrew Kreuser, a student in our Graduate School of Education and long-time teacher, the institute gave him a window into the students’ classroom experiences.

The students were frustrated by how often their teachers miss the mark. They told Kreuser, “Adults have to get used to not being right all the time, not making assumptions, and just listening.” The feedback was worth more than any professional development day.

“Those kinds of opportunities are the best kind of professional development you can have as an educator,” Kreuser said.

He’d also like to see more resources devoted to such mentoring programs.

“I think it’s something super crucial that I wish more individual schools or districts could put in similar supports along the way,” he said. “I feel like there could be better interventions in place.”

Evans agrees that more resources need to be devoted to such programs, and she wants to encourage an ongoing mentorship between the students and the seven partner schools.

“All it takes is somebody who cares paying attention,” she said. “From their perspective … it’s huge.”

Evans will also work with Ridley to find more funding in the coming year to support Transition HOPE and its mission.

Teaming up with teachers to enhance math & science

Disrupting the trauma to prison pipeline 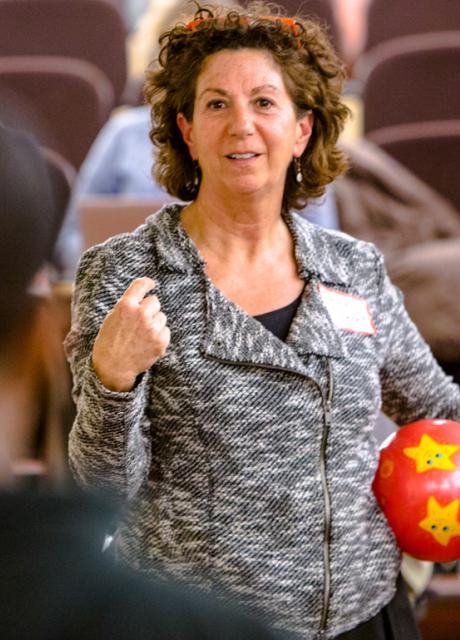