“You’re standing outside and the streets are just empty. It’s bizarre and eerie,” says Stephen Speranza ’14.

Over the past three years as a freelance photographer for the New York Times, Speranza has canvassed the city with his camera in hand, documenting neighborhood block parties, press conferences and rallies, the car washers of Inwood and the tailors of Brooklyn — vignettes of the vibrant Big Apple. And while he’s been busier than ever since New York City became the epicenter of the coronavirus outbreak in America, Speranza is photographing a much different city than he’s used to.

“There’s just a lot of heavy eyes,” he says. “Especially when everybody’s wearing masks, you can’t really smile at anybody.”

Speranza, who holds a bachelor of fine arts degree from our College of Art and Design, had an aptitude for photography early in life.

“I just gravitated towards documenting the things around me,” says the New Jersey native.

While in Lesley's photography program, Speranza developed the skills that would help him in his career, including an experience with photographer Raphael Dallaporta at the end of his sophomore year. Photography Chair Christine Collins recommended Speranza as an assistant to the photographer during an assignment for the New York Times Magazine. Although it was a one-off experience, he says it "opened me up to the possibility of working editorially as a photographer."

There’s just a lot of heavy eyes. Especially when everybody’s wearing masks, you can’t really smile at anybody.
Stephen Speranza ’14, BFA in Photography

“When I graduated, it was a pretty seamless transition to working as a photojournalist. The experience that I had had and the way that I had learned about going out and talking to people, learning about them, learning how to photograph on the fly, all those types of things were one and the same,” he said.

In 2016, after developing a strong portfolio by working on both commercial and editorial projects, Speranza connected with a New York Times metro desk editor who began feeding him assignments.

“I just emailed the right person at the right time,” he says.

Speranza is now a frequent contributor, and he's seen an uptick in work since the pandemic hit.

“Everybody is getting laid off and slowing down, but we’ve been swamped.”

A city in crisis

Speranza has been called on to photograph New York’s new normal — empty streets, masked denizens and the consequences of the deadly virus.

Last week, he was commissioned to photograph the transfer of bodies from a mortuary in Queens to crematoriums outside of the city. Given the number of coronavirus-related deaths, crematoriums have been overwhelmed, with some bereaved waiting as long as three weeks to receive the remains of their deceased, according to the article.

At the Gerard J. Neufeld Funeral Home, “They claimed they’d never had more than five bodies in the funeral home at a time, and then you walk into a room where they’ve got the AC on in April and there’s 30 bodies in a room, and they’ve got vans lined up out front to take them away,” Speranza says.

Photographing masked funeral directors transporting a body into a waiting moving van or a lonely passenger on the otherwise deserted Staten Island Ferry is enough to depress anyone, and Speranza couldn’t be faulted for sitting out on some of these assignments, but so far he hasn’t said no to a call.

“The darkness you feel on certain days,” he says. But, “I haven’t had a ton of time to reflect on everything yet.”

Speranza often spends 10-hour stretches traversing the city as he looks for scenes to photograph.

“At this point, I’m just focused on getting out there for the assignments that I’ve been given and doing the best I can,” he says. “You wear a mask and you go out and make the pictures.”

‘The time is always now’

Photographer LaToya Ruby Frazier calls students to selfless art and to speak out against injustice.
Read more about LaToya's visit to Lesley. 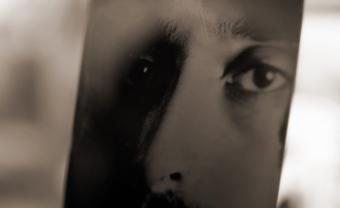