Meet a Lynx: A Q&A with filmmaker Ingrid Stobbe

Our new series highlights the people who make up the Lesley community.

Ingrid Stobbe is the subject of our first Meet a Lynx, a new series to introduce you to members of the Lesley community. Stobbe teaches filmmaking in our College of Art and Design. This interview has been edited for length and clarity.

Q. What brought you to Lesley?

A. In 2019, the film department was new, which as a professor is really exciting because there is a lot of room for creative input and growth. You get to design classes. You get a lot of say in what's happening, which is really great. And also, transparently, it's in Cambridge, which is a really active and vibrant art scene.

Q. Why did you become a filmmaker?

A. I would call myself almost more of a media artist than a filmmaker. I like to write, I like to paint and I like to do film. And I realized that I liked filmmaking the most because it enabled me to do things simultaneously that I enjoyed.

Q. What projects are you currently working on?

A. I am finishing a book with a colleague called "The New Filmmakers Guide: Not Getting What you Want, Leading to Creating What You Need."

The book is about what happened throughout cinematic history when artists would hit a wall but came up with something that was more creative and unexpected than what they thought they had in the first place. Then it goes into exercises to break apart the different areas of production and focus on those different creative muscles. It deliberately puts people in a pickle and asks them to sort their way out of it, to strengthen muscles so that when they're in a future production, they embrace challenges as a means to move forward.

And then this fall, God helped me, I am starting production on a film that I've been so patiently waiting to start. It’s about reaching a point where you have multiple elements of your identity that you try to preserve because you think that's the right thing to do.

When I was really little, I had to have endless surgeries, and my family dealt with it the best way they could, which was to minimize because I was the only sibling who had to deal with that. But when you're very little your brain doesn't really understand. It’s like going to a doctor's visit and then you leave and go to a birthday party. Then you grow up, and you have to find a way to sort of get both of those things into your identity as one person with these different facets. And that's the way that you try to navigate the world, and then you realize that you can't sustain that in your system.

Q. If you could teach any course at Lesley, what would it be called and why?

A. I would love to teach “Meaning through Media,” having elements of paper and paint and ink and film versus digital and asking students to choose projects based on what was in them and what it meant for them. You have to feed yourself in making work, so I think it's just so important to be thoughtful about that.

Q. What's something you want each of your students to know by the time they finish one of your courses?A. They as individuals are the critical element to their success. We're going to go over all kinds of principles and practices and ways to use the equipment and we'll watch all kinds of films. We'll learn about all kinds of makers but then figure out who you are because you can't be the next so and so.

You have to find some way to be yourself, even though that's scary and even though that can feel sensitive, like a softshell crab.
Ingrid Stobbe, Assistant Professor, Digital Filmmaking

That person's already taken, that art is already taken. You have to find some way to be yourself, even though that's scary and even though that can feel sensitive, like a softshell crab. It’s scary, but you have to stand up for yourself at some point. Take the criticism, think about it, then keep going. Right? Because you're interesting. There's a reason that you're here.

Q. What is your favorite movie?

A. In film school, you feel this pressure to say your film school answer, but there's also a time to have your mac and cheese and sit on the couch and watch some really relaxing favorite that just makes you feel good. And both are totally valid. 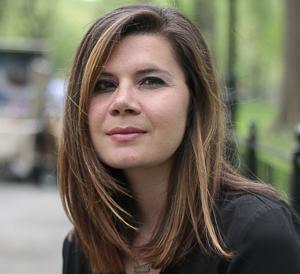 I'm going to give you both. I know all the lyrics and the choreography and everything to “Newsies.” It's 1992 with Christian Bale about the singing and dancing newsboys of New York. And “Meshes in the Afternoon by Maya Deren. The work is gorgeous. The thoughtfulness is gorgeous. I would love to sit down with her and be like, “Listen, I would love to have a glass of wine, talking about life and just osmosis you.”