Honoring the healers through song

Doctoral student Seneca Block, a music therapist, sings the praises of his Cleveland hospital colleagues and other caregivers

Seneca Block, a music therapist at a Cleveland, Ohio, hospital, is accustomed to using his talents and training to help treat trauma in patients. But as the effects of the COVID-19 pandemic began to cascade over larger and larger parts of society, he found another patient to help.

Block, a guitarist and songwriter — and the son of a musician father and nurse mother (“It makes sense I’m a music therapist.”) — recently composed “This Is Your Song” and other originals for the health care workers at his own place of employment, University Hospitals’ Connor Integrative Health Network. Among those staff members is Block’s wife, Sarah, working within the cellular therapy program treating cancer patients.

“The songs that I wrote are really intentional,” says Block, who is about half-way through his pursuit of a doctorate in our Expressive Therapies program. “The idea was to try to look at the system as if it was a patient that needed healing.”

Block, a music therapist for the past seven years, has a history of clinical training within a variety of Boston-area institutions, from Horizons for Homeless Children, Tufts Medical Center and McLean Hospital of Harvard Medical School. He received both his master's and bachelor’s degrees in music therapy from Berklee College of Music. Currently, he is pursuing his doctorate at Lesley precisely because the school broadened his thinking and pointed the way to a more holistic mindset regarding practice, treatment and research.

“It was the expressive therapies program — it gives a wide view of multiple fields,” Block says. “That has been really, really valuable to me. There’s a really beautiful collaboration that can happen. I’ve learned so much from my other expressive therapies colleagues, such as art, dance and movement therapists, as well as fellow music therapists.”

He sees, by virtue of his work and education, the benefits of a multifaceted approach to treating patients.

“I’ve been thinking about our medical centers like that,” he says. “I wanted to use technology and media to meet the system where it was at with music.” 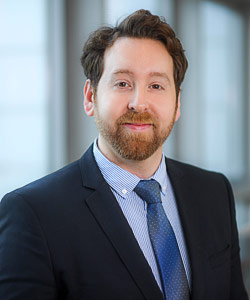 Block, a musician who, before COVID-19, often “gigged out” with his band Top Hat Black, was first exposed to music therapy in his teens, with the hospitalization of a parent.

“That kind of lit my fire,” he says. “That was my light bulb moment where I saw how music could help a person going through something so devastating.”

Block saw the profound effects of music on his hospitalized parent’s disposition during treatment and, years later as a practitioner, understood how to match music to where a patient is physically and mentally. That could mean using the dynamics of softer music when a patient is in the initial stages of trauma, for instance. Perhaps something more up-tempo and complex as the healing process begins in earnest, where the goal is to inspire and motivate.

The art of music therapy, however, is more complicated than just cranking the tunes when one is feeling down. But it’s related.

It’s all about looking at a person through a holistic lens, and for me, using music to support them along the medical journey.
Seneca Block, Expressive Therapies

Block uses the analogy of a physical therapist. Sure, anyone can benefit from jogging, bicycling or working out with weights on their own, but a trained expert marshals his or her knowledge to direct a rehab strategy and maximize results for the clients, based on research and empirical evidence.

“Most nurses and doctors get it, and I think it’s because music is so ingrained in our culture and our lives,” Block says. “Music is one of the oldest modalities, one of the oldest arts. Music dates back to prehistoric man. There’s always been an intrinsic need to make music.”

In his hospital system, Block is part of a treatment team composed of doctors, nurses, physical therapists, social workers, chaplains and others who consult on a given patient’s care. His role? “We try to use music to normalize the environment,” he says, explaining that surgical masks and gowns, the constant buzzes and beeps of medical equipment and other ambient noises of hospitals can be disquieting and intimidating to patients.

“We’re ingrained in the medical culture,” he says. “It’s all about looking at a person through a holistic lens, and for me, using music to support them along the medical journey.”

Pandemic prompts therapists to help doctors, each other