Graduate Students Challenged to Put Education to Work for Others

But, the commencement class was reminded multiple times, they didn’t get there alone. Their journey toward improving the lives of others owes much to Lesley faculty, staff, administrators and trustees, as well as the support and sacrifices of family and other loved ones.

And though the work has been hard, more remains to be done.

“Commencement is neither abstract nor superficial,” said President Joseph Moore, speaking at his last Lesley commencement in the role he is retiring from at the end of June. “What you’ve learned matters. The skills you developed will matter the rest of your life.

“Your responsibility is to continue to add breadth and depth to your experience.”

Molly Baldwin: ‘Justice is a verb and not a noun’ 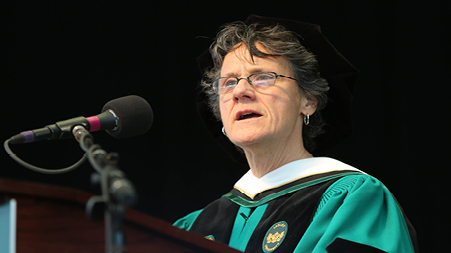 “I am humbled to be in your presence,” said Baldwin. “You came here to get
better at helping people.”

Advanced degree recipients - and their friends and family gathered to honor them - heard from Lesley alumna Molly Baldwin (M.Ed. ’12), the head of Roca, Inc., a Chelsea-based nonprofit that works with at-risk young people, including gang members and single mothers, teaching them life skills in an attempt to give them a way out of lives of deprivation and crime.

She contrasted the new alumni’s belonging to Lesley with those, such as impoverished immigrants and prisoners, who lack a sense of belonging. The need to find a place of one’s own too often drives an at-risk young person into gang life, or impels a young woman to stay in a dangerous relationship.

With her voice breaking, Baldwin spoke about the assassination of Martin Luther King, Jr. “It was then that I realized there were tremendous gaps in the world.”

To bridge those gaps, she managed to pursue her master’s in education at Lesley later in life, “dragging my heels,” on her way to a career in social justice, which she said is something to be pursued and practiced every day.

“Justice is not something we can proclaim into existence,” she said. “I believe justice is a verb and not a noun.”

At the center of social justice, she said, is compassion, even for those to whom one is naturally unsympathetic. Her work challenges her to treat with compassion young people who deal drugs, who have killed. Others have victimized children.

“It is easy to say I am compassionate, but in real life it’s hard,” Baldwin said. For guidance, she looks to the examples of Dr. King, Nelson Mandela and parents who have lost children, drawing hope from their strength and spirit.

Baldwin’s faculty escort, Graduate School of Arts and Social Sciences associate professor Meenakshi Chhabra, however, called Baldwin “an exemplary alumna” and credited her with “disrupting the cycle of incarceration.”

Charles M. Payne: Champion of and Activist for Social Justice in Education 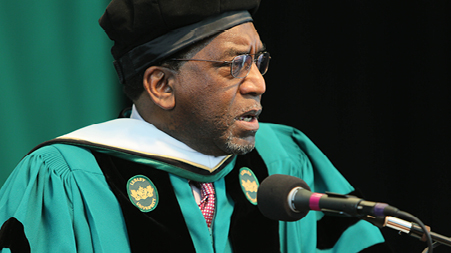 Author of “So Much Reform, So Little Change” and “Getting What We Ask For: The Ambiguity of Success and Failure in Urban Education,” Dr. Payne began his remarks by telling the audience he was honored to be at Lesley’s commencement, partly because “you’ve been doing social justice education before that was part of our language,” and partly because “I like new beginnings.”

This year’s graduates are making their new beginning at a “strange and troubling moment,” when the “civic fabric is stretched to the breaking point.” He acknowledged the current mood and the prevalence of bashing education and teachers, constantly accused of greed and inefficiency. “It’s even hard to have a conversation about how teaching may be improved,” he said, though much of the criticism is ill informed.

On the contrary, he continued, things are looking up. In many cities, including his “raggedy hometown of Chicago,” minority high school graduation rates have been on the upswing. Test scores have been steadily improving; the proportion of African Americans and Latinos performing in the lowest categories has been shrinking. He included Washington, D.C., in those improving cities, saying that, “rumor holds that it’s because so many Lesley students are doing their residency there,” to the cheers of many of the graduates.

“Wouldn’t it be nice if educators could get a little credit for making that happen?” he posed.

Acknowledging that the profession has probably never been held in lower estimation, he challenged the next generation to redefine the American vision. Hearkening back to times when most people lived in small towns, he told graduates that teachers used to be the voice of the common good.

“Amid all the noise today, it’s difficult to identify the genuine voices of children.” Those voices, he said, are in today’s graduates’ hands.

He ended with a story about an old wise man and some young people who wanted to try to trip him up. They decided to trap a bird in their hands and ask the man if the bird was dead or alive. If the man said it was dead, they’d release the bird, alive. If he said it was alive, they’d crush it—either way proving him wrong. They asked the old man the question—dead or alive?

The wise man answered, “It’s in your hands.”

As is, for the graduates of 2016, the future of education. 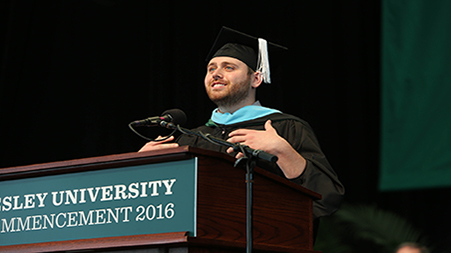 Student speaker Joshua Freitas, a master of Interdisciplinary Studies recipient, challenged his peers, as well as attendees, to “Strive for greatness; defy limitations.”

He spoke about his circuitous educational path, which included Berklee College of Music, where he studied music education and music therapy; Harvard, where he studied business; and Lesley, where mentors and personalized education helped him put his passions together for a career in the new field of dementia education.

Freitas revealed his own severe dyslexia and a reading and writing comprehension disorder. Despite his embarrassment over misspellings when asked to take notes for someone or write on the board, his Lesley network has instilled in him the “confidence to discover ways to surmount disabilities.”

By reckoning with and “eventually facing and owning” his personal challenges, he worked hard, with the support of his partner, to manage 21 senior-living communities, write books (his second is coming out) and has won national awards for his work.

Samantha Dell’aquila: Advocate for arts in the curriculum 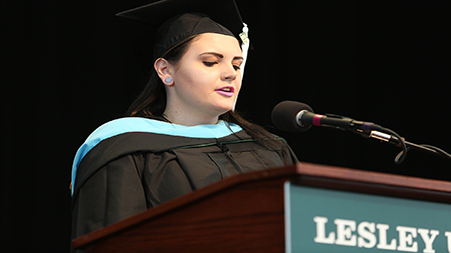 Student speaker, Samantha Dell’aquila, who graduated with
a dual degree BFA and M.Ed. in Teacher of Visual Art.

Echoing the remarks of honorary degree recipient Dr. Charles Payne, Graduate School of Education Dean Jonathon Gillette remarked that we are in “no ordinary time to become a teacher.” We now have “ample knowledge that children in our most challenged schools can learn,” he said, urging graduates to persist.

“The work is challenging and mastery does take time, but persist,” said Gillette.

He then introduced the school’s student speaker, Samantha Dell’aquila, who graduated with a dual degree BFA and M.Ed. in Teacher of Visual Art.

After greeting and congratulating her fellow students, Dell’aquila shared with the audience her journey at Lesley, which started in 2010, when she began her undergraduate degree at the then Art Institute of Boston at Lesley University (now the College of Art and Design). There, she discovered that she wanted to make art, but to also teach others to “express themselves through the arts.” When she finished her BFA, she moved into a master’s program, and, she said, “discovered how to merge my love for art, photography, and my individual creativity with my deep desire to help all people learn and discover themselves.”

She revealed that she has accepted two “incredibly unique” teaching positions, working with students from underprivileged backgrounds and students with learning differences.

“The number one thing that I have taken away from my time at Lesley is to be fearless,” she said. “Before Lesley, I felt that fear of teaching in an unfamiliar setting would have held me back…but now I know that I am beyond qualified and have the confidence to face and accept whatever challenges the world of education chooses to throw at me.”