Getting ahead, giving back

Dozens of people tuned in for the alumni career panel on Thursday, Feb. 17.

Panelists spoke thoughtfully about their career paths, from their early aspirations and worries to their hopes and plans for the future, and how their backgrounds, interests, skills and identities shaped their journeys.

The panel was introduced by sophomore biology major J’Nye Sibley, the secretary of the Lesley Black Student Union and a student staff member at the Career Resource Center. Participants were Vita Franjul ’19, a first grade teacher at the Eliot School in Boston; José Mendoza ’20, who works as an associate in the HR Development Program in Global Consulting and Solutions at Liberty Mutual; Roseangelle Poyau, BS ’07, MA ’15, director of student advocacy at MIT; Jon Sudarkasa, BFA ’16, senior motion designer at Squarespace; and Anaëlle Séïde, BS ’18, a project specialist at Mass General Brigham. Zalika Winitzer ’01, President of Lesley’s Alumni Council and senior manager of diversity, equity and inclusion strategy at Wayfair, moderated the panel.

Several used the word “roller coaster” when describing their search for meaningful and fulfilling work.

“My road was definitely not a straight road,” said Séïde, who earned Master of Public Health in 2020, as she described how her studies and passion-driven activism at Lesley led to a career in public health advocacy.

“Know who your people are; know your allies,” Poyau told students, urging them to forge meaningful connections, build networks and to ask for support from people they trust. “There are people out there that want to see you succeed, so find those people.”

Franjul spoke about how her own experience as an undocumented student had made her anxious about her prospects for securing a long-term career as an educator, but also how it reinforced the importance of representation in the classroom.

“There’s really a need for teachers like me who represent the students that we teach—talented young teachers of color who can really open up spaces and have conversations in the classroom that historically have not always happened,” she said. “I really look forward to being the teacher that I wish I had when I was younger.”

“Ninety-eight percent of the time, I’m the only person of color and it gives me a good opportunity to really think differently and raise questions,” he explained.

He also observed that working for a company with a charitable foundation, he was able to advocate on behalf of non-profits that had made a personal impact on him, including the Boys and Girls Clubs, West End House and the YMCA.

“It’s an opportunity to give back to the organizations and the communities that helped me out,” he said. “It makes me excited to be able to have more impact on other students.”

Panelists addressed more challenging issues as well. Sudarkasa described his feelings while working on an animation project for a security company that he felt unfairly targeted men of color. Several panelists described the pressure of feeling that they had to not only pursue their own career goals but also blaze a trail for other people of color in their work environment.

“She told me ‘Don’t be the one to say no to yourself—put yourself out there and see what happens. If someone else says no to you, fine. But make sure that you’re not the one saying no to yourself, because you’re limiting yourself before even giving yourself the opportunity to try.’”

Looking to Lesley for a bright future 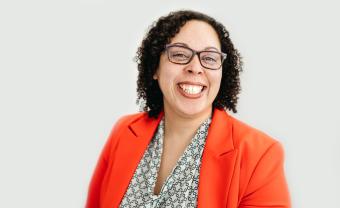