For adults who face external challenges, such as limited finances, abundant family responsibilities, or stressful life events that caused many stops and starts in college, the promise of a four-year degree often seems an elusive dream. 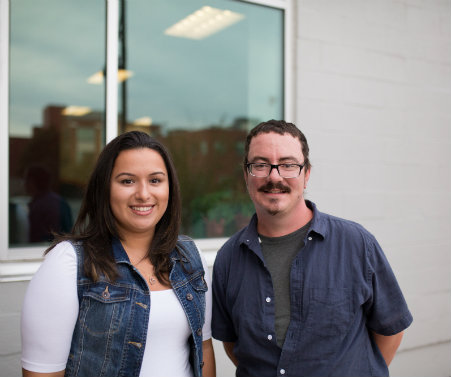 In August, the first graduates from the program received their degrees.

“I have wanted to attend Lesley since the eighth grade, when I did a campus visit with my school,” says Veronica Serna-Sanchez, a community support specialist who was offered her job after an internship she did as part of her Lesley degree. “However, after graduating from BHCC, continuing my education seemed daunting.”

Serna-Sanchez was vexed by a variety of considerations, including money, class sizes, “or even picking a school that I would love as much as BHCC,” whose professors she credits with teaching her to love learning and to realize that knowledge is power.

But then she received a call from Katherine Barone, assistant professor of psychology and director of Lesley’s Psychology and Applied Therapies division.

“She asked me if I was interested in attending Lesley’s new BHCC program,” says Serna-Sanchez. “This was the answer to my prayers: I could stay on the BHCC campus, still have smaller class sizes, but have the advantage of being taught by Lesley professors and have their encouragement and the university’s support.”

Lesley accepts full transfer of BHCC students’ associate degrees as well as credits earned at other institutions for a total of up to 90 credits. After personalized advising, students enroll in one of three Lesley programs (Early Childhood Studies, Psychology, or Business Management) all conveniently offered Friday evenings and Saturday mornings on the Bunker Hill campus. This allows students to complete degrees in as little as two years, straight from their associate’s programs at Bunker Hill.

This program meets a national demand for accessible, affordable and convenient bachelor’s degrees. 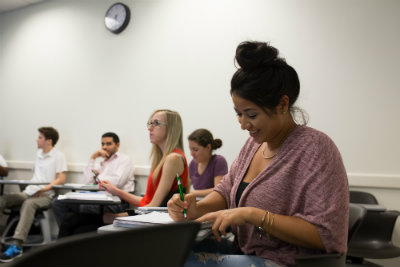 Yajaira Perez-Ramirez and other members of Lesley's newest
psychology cohort

“Partnering with Bunker Hill just makes sense,” says Jennifer Serowick, assistant vice president for adult learning programs at Lesley, “Students benefit from Bunker Hill’s resources, location, affordability and numerous high quality course and program offerings. They are then able to make a seamless transition to Lesley without the fear of credit loss knowing exactly when they can expect to finish.”

Lesley plans to roll out similar programs with other community colleges.

The Lesley-Bunker Hill program’s flexibility and affordability were crucial to Christopher Berry who, like Serna-Sanchez, studied psychology at the community college.

“The Lesley-Bunker Hill program was affordable and super convenient,” Berry says. “Since the classes took place primarily at BHCC, I was able to adapt easily to the new program and make the transitions seamlessly.”

And to students with extraordinary challenges, such programs foster self-sufficiency and success.

Berry is candid in his discussion of his struggle with bipolar disorder before he took control of his academic and, ultimately, professional future.

“I started my college career taking a few classes at the Community College of Rhode Island. I started light because I was still recovering from my first major depressive and manic cycle caused by my bipolar disorder,” Berry says. Later, he moved to North Carolina to pursue a degree in outdoor leadership.

“I had been a Boy Scout since I was 11, and wanted to spend time outdoors helping people through programs like Project Adventure and Outward Bound,” he says, but something was missing.

“After two mostly successful years, my bipolar (disorder) resurfaced, making it very difficult to focus my energy and attention on school.”

Berry moved back home to Rhode Island to stay with his parents, but things didn’t improve. He cycled between manic highs and depressive lows, eventually deciding on an alternative course of treatment, which he found at a therapeutic farm in the Berkshires. He eventually graduated that program from its facility in Medford.

“I started to set my sights on continuing my education,” Berry says. “I decided to stretch my academic muscles by signing up for a few classes at Bunker Hill Community College,” where he studied abnormal psychology and had an epiphany.

“I wanted to use my own experience with mental illness to help others navigate the process of healing and recovery,” Berry says, praising the community college’s enthusiastic and relatable faculty. Then his prospects grew even brighter when he learned about the Lesley-Bunker Hill partnership.

Jennine Tambio oversees the partnership as well as other community college outreach efforts, and serves as academic adviser.

“Like Christopher, all of the Lesley at Bunker Hill students are very inspiring,” Tambio says. “They are full-time scholars, often also working 40-plus hours and/or caring for family members.”

From left, Ruiming Huang, Tagesech Wabeto, Marie Ntawizera
and Elias Torres work on a collaborative project in Writing for Educators.

In addition, she says, “Many of our students were born abroad or may be first-generation college students navigating the complex higher education system.”

Serna-Sanchez is one of them. Her mother, one of 15 siblings, was the only one to immigrate to the United States from Colombia, with two toddlers in tow (Serna-Sanchez’s older sisters).

“I am, out of 68 cousins, the only one born and raised in the United States,” she says. “From an early age, I understood how privileged I was to be an American citizen, and I also understood having pride in your own customs, traditions and language.” She was also mindful of the opportunities denied her mother, who grew up in the rural life of Medellin, Colombia.

Though she excelled academically, other challenges lay ahead.

“During my early teens, I moved around numerous times and that, in turn, created instability for me during a time I was in search of my identity,” she says. “Right after high school, I started attending a community college in my old town and absolutely hated it. I disliked the physical building, its gloominess and everything it represented.

“A year later, I moved to Boston and enrolled at BHCC. Best decision I have ever made.”

Serna-Sanchez’s time at Bunker Hill reignited her passion for learning, and Lesley University was there after she earned her associate’s degree to light the way to an avenue for higher earnings and a fulfilling career.

The Lesley-Bunker Hill partnership began in 2014 with only five students. In the Fall 2016 semester, there are 73 students enrolled. For more information about the Bunker Hill-Lesley University partnership or Lesley’s Center for the Adult Learner, contact us at 617-349-8800 or admissions@lesley.edu or visit us online at www.lesley.edu.