Inez and Vinoodh’s importance seen in their work ethic, as well as their groundbreaking art. 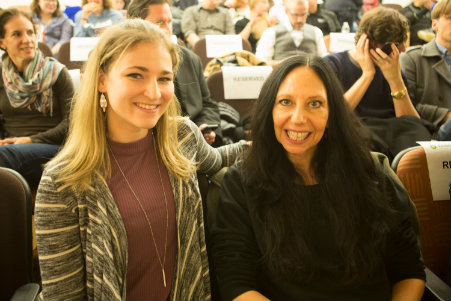 Van Lamsweerde, one half of the fashion photography duo Inez and Vinoodh (her husband and collaborator, Vinoodh Matadin, was home caring for their ailing son), spoke at length about her process while disclosing some artistic and personal insights about many of the celebrities they have photographed.

Though the pair has produced many still life images, their focus is on more animated subject matter.

“We are photographers of human beings,” Inez explained, though their approach is often irreverent. Bemused by America’s burgeoning fitness culture of the 1980s and ‘90s, they produced a series of photos called “Thank You, ThighMaster,” a nod to the once-ubiquitous advertisements of the Suzanne Somers-championed exercise equipment.

The duo later altered a series of nudes, using a computer to remove the nipples and orifices to create human mannequins, a statement about the loss of human contact in the Internet age.

But much of their work displays palpable sentiment. Inez showed a portrait of she and Vinoodh in a passionate kiss, followed by a similar image, but with Vinoodh digitally removed from the frame. This alteration transformed Inez’s ecstatic facial expression into something resembling a rictus of grief at the disappearance of her love. 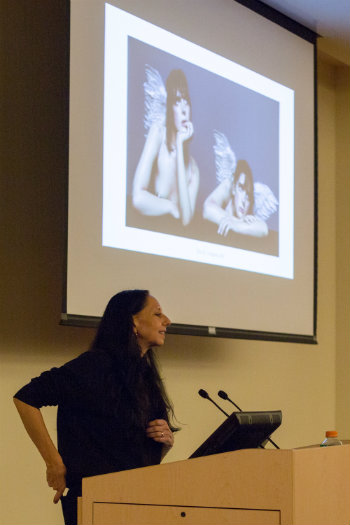 Some of the work provided insight into the psyches of celebrities.

In a series of three-headed images, inspired by Greek mythology (in this case, the three-headed dog, Cerberus, who guards Hades), Inez paused on one of pop singer Lady Gaga. The performer, Inez said, was moved by the image because the center head (in contrast to the stage-makeup-festooned others) showed the singer’s natural beauty, a side of herself she wasn’t used to seeing after years of being criticized about her appearance.

Another image of actor and director Clint Eastwood owed to a mishap with a new smoke machine. Originally, Inez and Vinoodh had planned a mere wisp of smoke, as if descending from heaven. Instead, the machine belched forth a large white cloud that enveloped Eastwood’s face, revealing only his eyes and mouth, and just the faintest hint of his facial structure. Eastwood was a good sport about the whole thing.

Vinoodh had captured the surprising image because of the pair’s approach. Inez directs the action and is the main photographer, she said, while Vinoodh almost surreptitiously chronicles the process, yielding unguarded moments of beauty.

“Vinoodh walks around in a sort of voyeuristic way,” Inez said, adding he effectively “steals the pictures.”

Inez’s appearance was the latest in the Strauch-Mosse Visiting Artists Lecture Series, funded by Trustee Hans Strauch and the Mosse Foundation. This series enables the university to bring world-renowned and award-winning artists to the campus in support of Lesley's commitment to artistic and cultural inquiry and the integration of the arts throughout the curriculum. The series is free and open to the public.

The lecture also was a celebration of Lesley’s role as the exclusive regional host of the work of fashion photography icon Irving Penn. The exhibition, “Irving Penn: Beyond Beauty,” ends Nov. 19.

“It is important for today's art and design students to study and follow the work of Inez and Vinoodh because, like Irving Penn, their career spans the worlds of both art and fashion/commercial images,” said Lesley University Dean Emeritus Stan Trecker, whose retirement coincides with the end of the Irving Penn exhibition.

“Their work has appeared in major museums and on the covers of significant publications, such as Vogue magazine. Also, they are among the first photographers to understand and develop the possibilities of digital-imaging technology as a creative tool. They are an excellent example of the creativity, hard work, and professionalism necessary to carve out a thriving career in the arts.”