The current flag flies outside of the Massachusetts State House (image: Wikipedia Commons)

When Massachusetts Gov. Charlie Baker signed a bill in January to establish a special commission to consider a replacement for the racially-insensitive state seal, motto and flag, a group of Lesley designers rejoiced. They’d already been working for months to support the effort.

The current flag features a Native American man in the center. Overhead is a disembodied arm holding a sword and underneath a Latin phrase that translates to “By the sword we seek peace, but peace under liberty.”

As Elizabeth Solomon, an elder of the Massachusett Tribe at Ponkapoag, said in a statement, "The imagery of the current flag and seal promotes a history of conquest, appropriation, and genocide.”

For more than three decades, Native American organizations and former State Rep. Byron Rushing pushed for legislators to address the flag, viewing it a symbol of an oppressive, racist legacy.

“Our collective symbols of identity matter, and when they marginalize some of our fellow residents and perpetuate harmful stereotypes, they should be replaced with symbols that elevate and lift up all our residents,” says State Sen. Jason Lewis, who sponsored the bill.

Rick Rawlins, a long-time adjunct professor in our College of Art and Design, had watched as Americans protested racial injustice and as confederate statues were removed from public spaces. When he heard about the bill, he saw an opportunity for our students to put their design chops to work and align with the university’s social justice mission. Katherine Shozawa, director of Community Engagement for the college and co-faculty for the course, and Heather Shaw, faculty chair of Design, joined him on the project.

“We wanted to make sure that the projects we were working on were very responsive to this particular moment,” says Rawlins.

“I’m very grateful to Professor Rick Rawlins and his students for their thoughtful work to share strong flag design principles and the challenging work involved with the public process to redesign a flag, and particularly for their diligent work to center the voices and experiences of Native communities,” he says. “I’m looking forward to the launch of the commission and excited to see how the work of the Lesley students informs and elevates that public process.”

For 30 years, Rawlins has led Lesley’s Community Design Studio, a biannual course that pairs students with nonprofits to work on real-world projects.

“We favor projects, like this one, that have the potential of improving our relationships with neighbors, with our community, and in this case, with (Indigenous) communities,” Rawlins says.

For instance, in the past, the course has partnered with Cambridge Arts to celebrate Sidewalk Poetry with an installation and a short film, and Common Exchange, through which students designed a four-part newspaper project to accompany a year-long art and history initiative related to the Cambridge Common.

The state seal project, however, was a completely new challenge — from the weighty responsibility of addressing hundreds of years of discrimination against Indigenous people to defining the scope of such a major undertaking. Yet, faculty knew this was something that would help students understand what design can do.

Rawlins offered the studio’s design support to Lewis, whose office agreed with the caveat that faculty first approach Native American leaders involved and potentially represented in the commission to decide if the design students would be involved.

Those were “soul-searching conversations,” Rawlins says.

“We had to prove that we were trustworthy and that we could serve as sensitive, respectful and understanding stewards of the depth of history and trauma that this project embodies for Native communities,” says Shozawa.

The current flag wields power and tells a story, says Kunkel, a citizen of the Northern Cheyenne Nation and director of MASS Design Group’s Sustainable Native Communities Design Lab in Santa Fe, New Mexico. No matter what happens with the Massachusetts flag, Lesley’s work has the potential to bring truths to light and contribute to an important conversation about power, social justice and history.

“I think that could be pretty powerful no matter how small it might be,” Kunkel says.

Empathy is the first step in Design Thinking, a framework that prioritizes empathy in the design process.

“We knew, being majority non-Native, that we needed to begin the course by listening to, and working closely with, Native community collaborators to do the work well,” Shozawa says.

When the Community Design Studio course started in September, students had a lot to learn, including the origin of the current seal.

Jean-Luc Pierite, board president of the North American Indian Center of Boston, explained that the head of the figure represented in the seal was modeled after an Ojibwe man named Thomas Little Shell and excavated bones, while the sash was that of Metacom, also known as King Phillip, who was beheaded and his head displayed on a post for 25 years at Fort Plymouth.

The seal, says Pierite, “is evocative of the intergenerational trauma and colonial violence which our communities have endured for the past 400 years.”

This information was news to the students. Like many Massachusetts residents, they were largely uninformed about the controversy surrounding the flag.

“Most people, they didn’t realize (the seal) was a problem,” says Madeline Meyer ’21, who is from Massachusetts. In speaking with friends and family, she discovered, “Some people thought it was a good thing because it was representation on the flag.”

Meyer herself was unaware of the flag’s controversy before the class, and as she and her peers began to sit in on listening sessions with Native American project advisors, from nonprofit leaders to design professionals, she says, “I remember almost being overwhelmed by the amount of new information because some of the details of the flag are truly troubling.”

Chelsea Johnson ’22, a Mainer who lives in Massachusetts, also knew nothing of the controversial flag or the experience of Native American people today.

“I was very surprised and shocked by how much oppression Indigenous people still encounter,” said Johnson. Hearing from Indigenous people, such as Gov. Brian Vallo, of Pueblo of Acoma, prompted her to look into her own ancestry.

“I was able to do some research with my family and found out I have a lot of Indigenous background. I just want to know more and be able to contribute more if I can.”

Speaking with partners and advisors, such as the Harvard Indigenous Design Collective, the North American Indian Center of Boston, MASS Design Group, North American Vexillological Association and the Native American Fellowship Program at the Peabody Essex Museum, formed the framework for how the class would support the commission.

They formed a two-pronged approach. One focus is a series of research documents to educate the commission on the elements they might need to develop a new flag.

The first document, which has already been completed, evaluates the removal and replacement of Mississippi’s flag, including missteps, who was involved and even advertising costs. 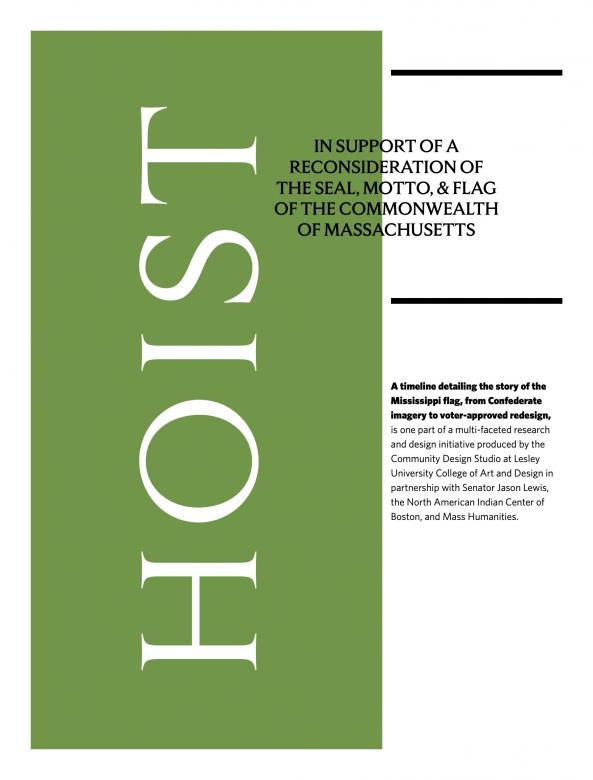 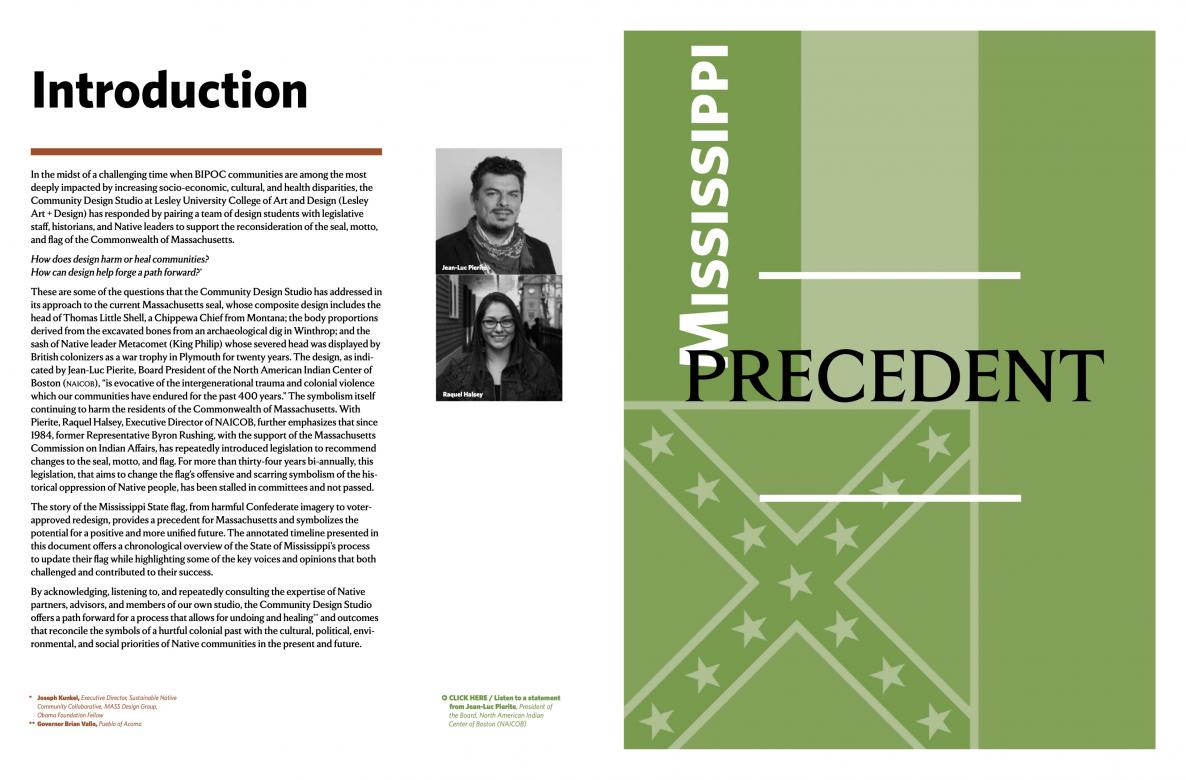 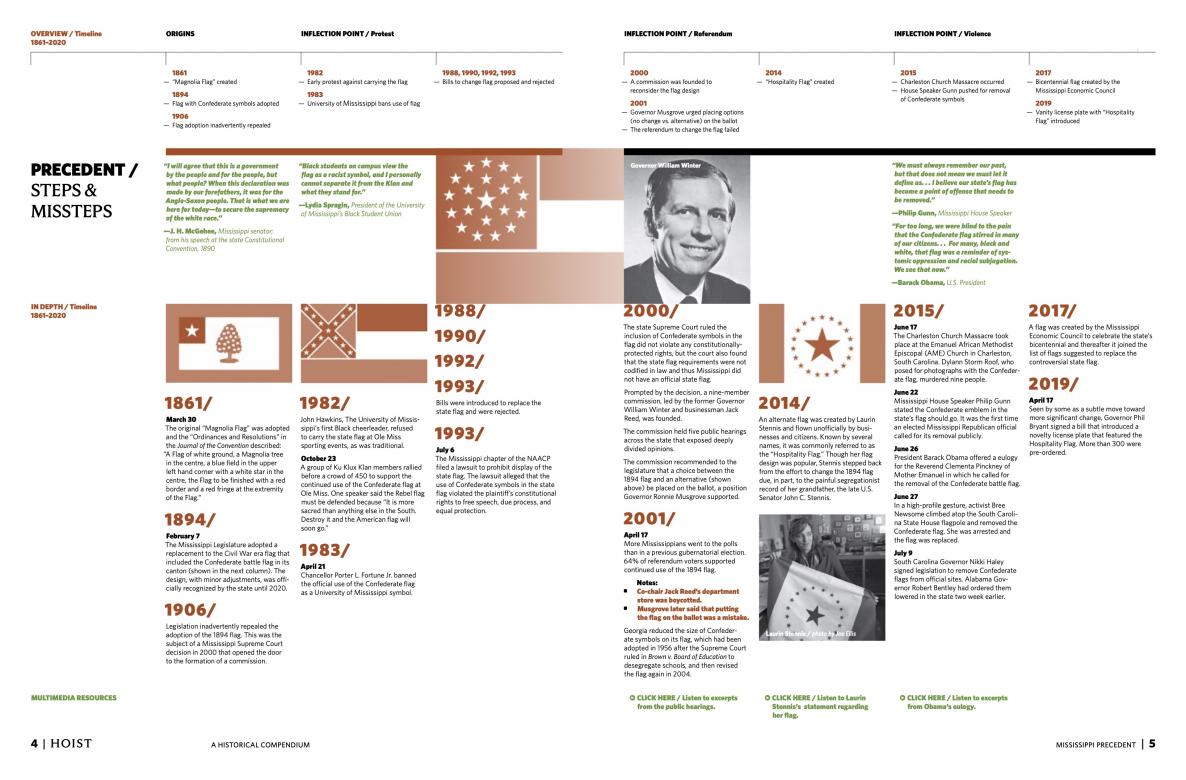 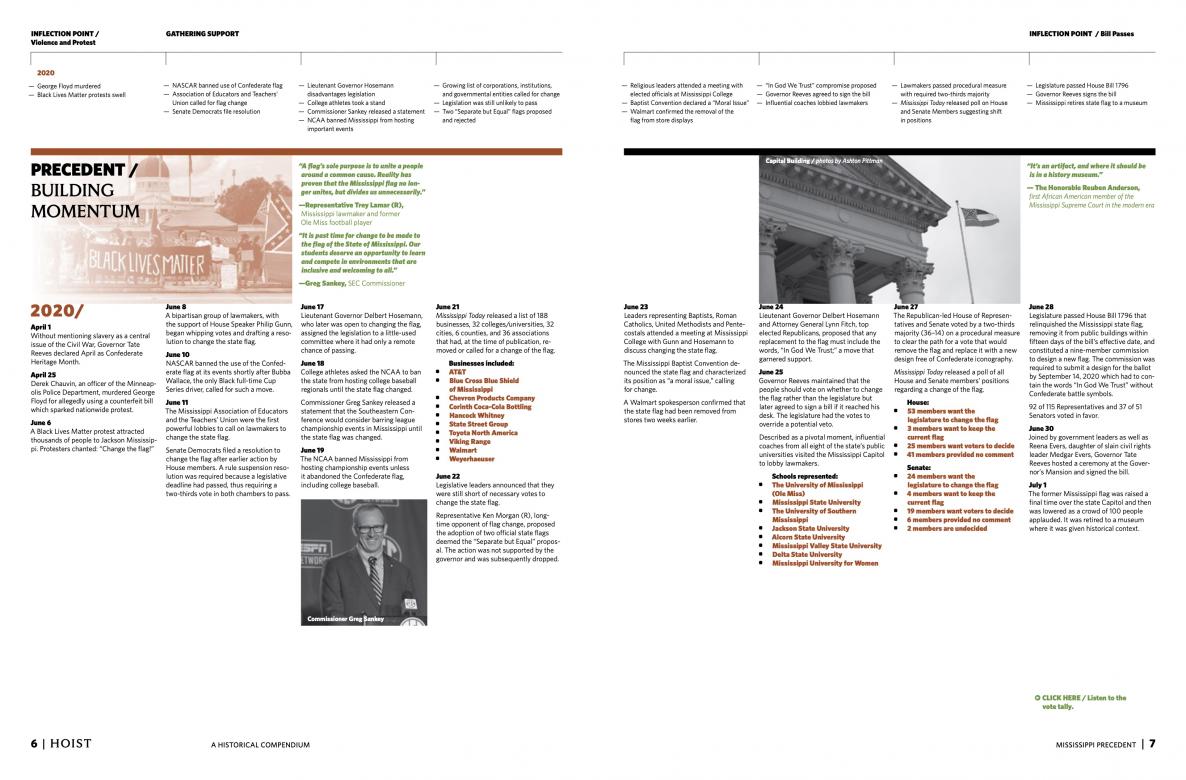 Slide 4 of 6
Community Design Studio
Building momentum: The move to remove the Mississippi flag in 2020 (April-July) 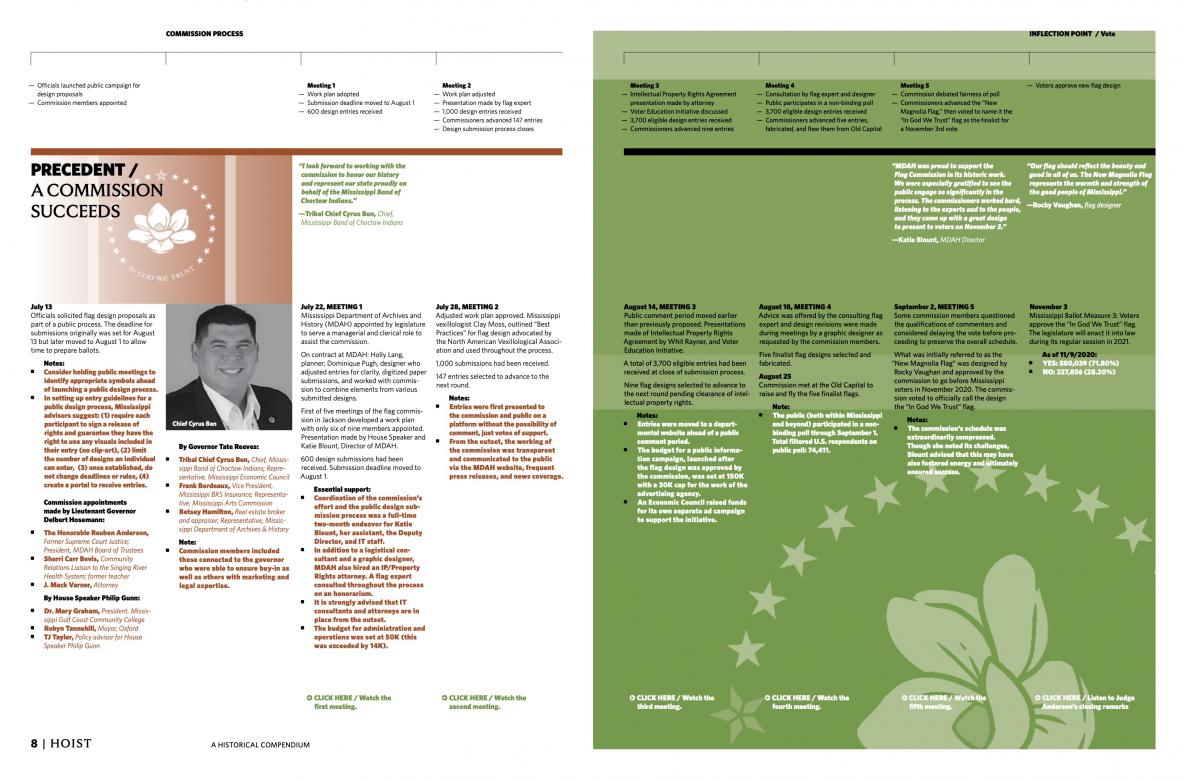 Slide 5 of 6
Community Design Studio
Precedent: The move to remove the Mississippi flag in 2020 (July-November) 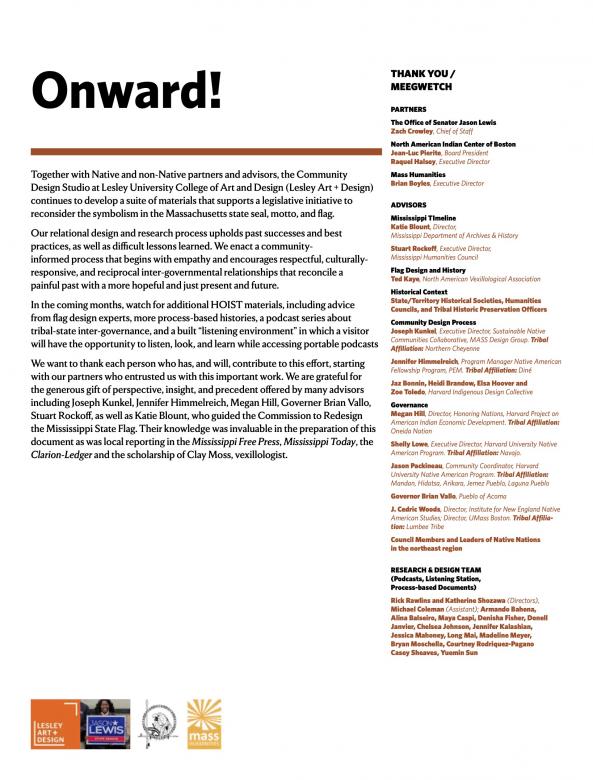 Slide 4 of 6
Community Design Studio
Building momentum: The move to remove the Mississippi flag in 2020 (April-July)

Slide 5 of 6
Community Design Studio
Precedent: The move to remove the Mississippi flag in 2020 (July-November)

The other documents are: a list of best practices for flag design, an overview of Massachusetts history as it pertains to the motto, seal and flag, a document on flags and symbols used in Native communities and another on inter-governmental relations. All documents will be delivered to the newly-formed commission by the end of the semester. The commission must present its conclusions by Oct. 1.

The second focus is a public art installation accompanied by a QR code that will link to a podcast Meyer will produce for her senior capstone project. Due to COVID, the location of the exhibit is still to be determined.

The students don’t know how their work will affect the commission and the potential creation of a new flag, but it’s already been transformative for all those involved.

“I find it so empowering at the beginning of our careers to be able to do something that is so challenging but has the potential to make a beautiful impact,” says Meyer.