When it comes to race in this nation, America has plenty of problems with no easy solutions, said author Dr. Randall Kennedy. 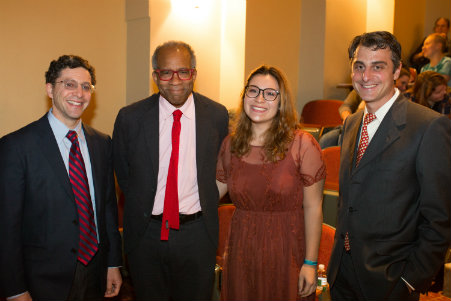 Kennedy, a Harvard Law School professor and author of several books on race, politics and the law (including 2011’s “The Persistence of the Color Line: Racial Politics and the Obama Presidency”) spoke Oct. 13 in Marran Theater as part of CLAS Reads, a program of the College of Liberal Arts and Sciences. Kennedy touched briefly on the work of another author, Ta-Nehisi Coates’s “Between the World and Me,” the required reading of Lesley’s first-year students this year.

Coates, Kennedy said, is one who takes a pessimistic view of race in America, believing that whites and blacks (as well as other people of color) are unlikely to be able to live comfortably as equals in American society.

“His answer is no, we shall not overcome,” Kennedy said of Coates’s view, espoused in his bestselling book, written in the form of a letter to his teenage son.

“(The) police departments of your country have been endowed with the authority to destroy your body,” Coates writes, though the killing of unarmed young black men by police is only one high-profile reason for pessimism. Kennedy said race pessimism permeates American history, and includes figures like Thomas Jefferson (whose “Notes on the State of Virginia” describes the “African Race” as less intelligent and imaginative than whites) and Abraham Lincoln (whose ruminations on solving problems of race tended toward establishing separate colonies of free black people).

However, other abolitionists and later figures, including Dr. Martin Luther King Jr. and late Supreme Court Justice Thurgood Marshall (for whom Dr. Kennedy served as a law clerk) took a decidedly optimistic view of the prospects of racial harmony and equality. Among these adherents are those who champion a “color-blind society,” and others who, as some audience members offered, envision a “’Star Trek’ ideal,” where racial differences are acknowledged, but present no obstacles to equality.

But even the “Star Trek” ideal is flawed, one audience member offered: “The star was always white, until ‘Deep Space 9.’”

Kennedy pointed out the benefits of various optimistic views, in that they repudiate the notion of white superiority and have led to a great number of advances toward equality over the last century. But there are always complications, and race, he added, is the “central force in American life.”

Some color-blind-society advocates, like the late Supreme Court Justice Antonin Scalia, are “immediatists,” who want to dismantle Affirmative Action and see no need for mandatory diversity training or multicultural classes. Instead, they believe everyone should be considered equal and “let the chips fall where they may.”

“We know where the chips are going to fall,” Kennedy warned, adding that they rarely fall in favor of the historically disenfranchised.

Kennedy also pointed out flaws in the well-intended push to make all facets of society “look like America,” a cabinet-composition goal of former President Bill Clinton. But did Clinton’s cabinet truly look like America? Where were the Asian Americans, for instance? Should an NBA basketball team look like America, Kennedy joked.

“What should we be after?” Kennedy said. “We don’t have a clear notion of that. We’re searching for it.

“I think people in schools like this should be thinking about what we want.”