Art students give gift of color to colorblind classmate

“It’s like seeing the world in a whole new perspective for the first time,” says Tim Smith.

Smith, an animation major who graduated from Lesley last month, is colorblind. But at the senior show, his classmates surprised him with a gift: a special pair of glasses that help correct colorblindness. All of the animation seniors chipped in, led by classmates Aiden Budnick and Jacqueline Donnelly.

“I was completely caught off guard,” Smith recalled. “I was so happy, amazed, surprised, grateful, and so many other feelings.”

The Boston Globe was on hand to capture the joy and excitement, which you can read about here. 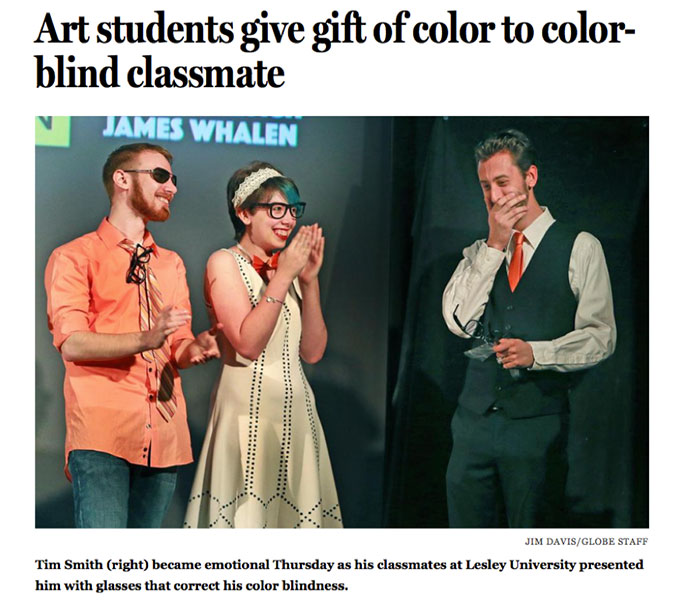 A few days after his friends at the Lesley University College of Art and Design surprised him with the glasses, Smith re-watched “The Lion King,” one of his favorite movies. 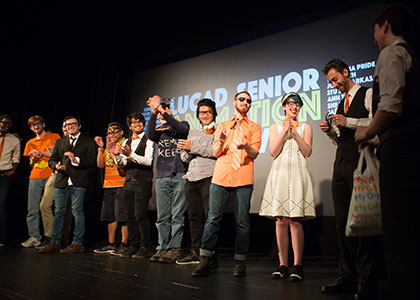 Tim Smith (far right) is applauded by his classmates after the surprise.

“The very first five seconds of the movie, when the sun rises in the valley, I was blown away by all of the shades of orange, yellow and red I've never seen before,” he said. “I was so happy I started to cry. The beginning scene, ‘The Circle of Life,’ was incredible. All of the colors that I've never noticed before were popping out and making an already beautiful movie even more beautiful. It was like watching the movie for the first time.”

For those who know Smith, they say he never let colorblindness get the best of him. He was always a leader and a helper to his peers throughout their animation degree program.

His classmates and professors chipped in to purchase the $350 glasses, and before the surprise, they tested them on someone in the Financial Aid office who is colorblind, who saw purple and scarlet immediately when he tried them on. Smith’s classmates hope the glasses will aid him in his animation work as they all venture out into the professional art world.

“Tim mentioned while he was working on his portfolio website and reel that he was nervous about trying to apply for jobs,” recalled Budnick, his classmate who led the effort. “I said to him that he shouldn’t be nervous – he should actually brag about this. It’s so cool he’s in the art field. Colorblindness is something that would discourage most people, but he’s still so gung-ho and still making all this amazing art. It’s such a unique thing. Many people would say an artist can’t be colorblind. 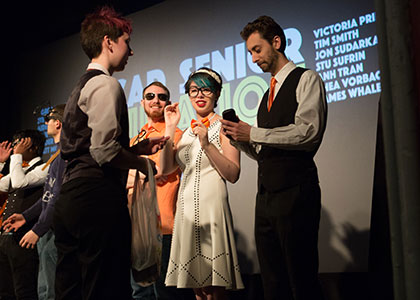 “We jumped at the opportunity to get the glasses for him,” Aiden added.

His professor Brandon Strathmann said that Smith is the most improved student in the class and a highly skilled animator.

“Tim has great understanding of the dynamics of human movement, critical to making top quality animation,” said Strathmann, an associate professor of animation and motion media. “Tim is a master at dancing and choreography and brings that to his work. He is also a good friend and leader who has helped his classmates with staging and posing their characters in dance sequences. Tim is so good at this that I have placed him with other animators struggling at getting their characters to dance.”

Added Strathmann, “I am very happy that Tim’s friends decided to give him this gift of enhanced vision. He has certainly improved the experiences of all of his peers.”

For Smith, he loves looking everything from the sky and the grass to his friends’ hair color, seeing the world as he’s never seen it before.

“It’s like seeing the world in a whole new perspective for the first time,” said Smith. “I can't be more thankful to my fellow animation peers.”