Learning as much as possible about each English language learner can increase students' chances for academic success.

Imagine you're an eight-year-old child whose family is newly arrived in the United States and enrolled in a public school where only English is spoken. There, nobody plays the games you know, eats foods you eat, or follows the school calendar you’re used to. You communicate little and flounder when asked to read English out loud.

Six months later your teacher thinks you may have a disability and refers you to special education. He does not know you're able to read well—but in your native language.

The majority of children formally referred to special education are typically found eligible, and soon your experiences mirror those of other children for whom this assessment is inappropriate. As your time spent in a general education classroom lessens, deep-seated frustration sets in.

Dr. Maria de Lourdes B. Serpa, Professor Emerita at Lesley University, says mistaking second language behaviors for learning disabilities is an urgent issue in Massachusetts. English language learners (ELLs) were 7.7 percent of the 2014 school population, or over 75,000 students, and this population is only growing. These students are also 1.5 times more likely to drop out than the students who know English and can do their academic work in the language.

“We’ve known for about 30 years that English language learners are disproportionately assigned to special education,” says Dr. Serpa, whose native language is Portuguese. “It can happen for a number of reasons: a teacher has not been trained to address the needs of students learning another language and lacks basic professional knowledge of second language acquisition. Maybe the parents don’t understand the American school system. Some are too afraid to put a toe in the building.”

Dr. Serpa adds that assessments can also be inaccurate because the testing is delivered using instruments validated only for use with English speakers.

“You cannot just do an on-the-spot translation!” she says, noting that Lesley University pioneered the training of educators to provide non-discriminatory special education assessment. Lesley also has developed programs that prepare people to teach English language learners, including a partnership program with the Somerville, Massachusetts, school district that puts graduate students into one-year classroom internships as part of their master’s degree. Dr. Serpa is the author of Imperative for Change, a report on the needs of English language learners with learning disabilities.

ELLs and the Secret Costs of Special Education

“Once you’re in special education, it’s exceptionally difficult to get out. An ELL, whose only issue is language acquisition, may act out from sheer frustration, or may take longer to learn to read. They need more time and skilled instruction, not teachers who view them as problems,” she says.

Meeting Students Where They Are

Elementary and secondary school students can take up to a year to absorb survival English and from five to seven years to master the academic English of textbooks. "It’s wishful thinking that a child who does not yet speak English can be put into an English-only classroom and then pick up the language and quickly achieve at grade level in math, science, and reading,” says Dr. Serpa. Now, after the 2012 Rethinking Equity and Teaching for English Language Learners (RETELL) initiative, Massachusetts public school teachers must take a class in Sheltered English Immersion.

Educators can start by examining their own assumptions, says Serpa. “Poverty is no excuse! The ways teachers learn to teach today’s students must be different. Teachers need to believe every child can achieve."

Dr. Greenfield urges the educators she works with to "gather as much intelligence as possible" about individual English language learners. Teachers who do not speak a student’s language can search the school building to see if someone else does, and gain crucial information about an ELL’s background that way.

A quick Google search can yield audio examples of how to say "good morning" and "hello" in a low-incidence language, such as Temne (Sierra Leone). “Students love this! A teacher who makes him or herself vulnerable—asking new arrivals about their native language and then integrating it as part of their classroom culture—sends a real message of welcome,” she says.

Both experts see a linguistically diverse classroom as one that can enrich every student’s learning. Dr. Serpa envisions all students graduating from secondary school proficient in two languages and well prepared for a culturally diverse society. Dr. Greenfield sees such a classroom as an important component of social and political justice.

“Schooling is not just about academics. It’s about becoming a full human being. Everyone seeks to belong, to be honored, and respected,” says Dr. Serpa. 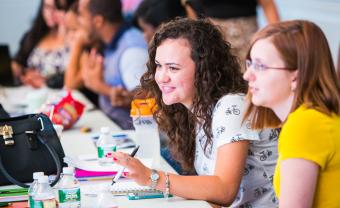 The first Urban Scholar to graduate talks about the challenges she faced as a DACA immigrant and later when she started college.
Read more about Natalia Rosa
News

Our educators to work with Brockton schools, immigrant families 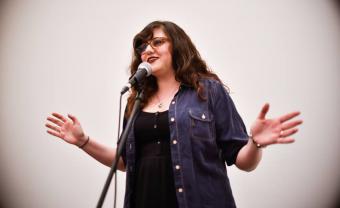