Driven by a passion for cross-cultural understanding, Mary (Pyne) Struzska-Tyamayev ’16 relishes her role as a global education program director, working on everything from student advising and daily operations to visa regulations.

For longtime faculty member Jane Etish-Andrews, her passion has been to help students like Struzska-Tyamayev hone their skills and prepare for a career in which they will build personal relationships driven by a deep commitment to international students.

Both Struzska-Tyamayev and Etish-Andrews were recently recognized for their impact and accomplishments in the field by the Association of International Educators, formerly known as the National Association of Foreign Student Advisers, (NAFSA).

Etish-Andrews won the association’s George Commenator lifetime achievement award for her extensive service over the last three decades. Etish-Andrews taught at Lesley for many years and advises the International Higher Education program. Over several decades, she supervised Lesley students’ internships and independent studies.

“The recognition by my peers of my devotion to the field, and to international education, means a lot to me,” says Etish-Andrews, who recently retired as director of the International Center at Tufts University, where she oversaw many Lesley interns and hired Lesley alumni. “The award touched and moved me in a way that just reinforced everything I do.”

Struzska-Tyamayev won NAFSA’s Rising Professional Award, which honors people who have worked in the field for five years or less.

“I’m very touched to be recognized in such a way, especially as there are plenty of other deserving folks in our region,” says Struzska-Tyamayev, director of the Center for Global Education at Simmons University. She earned her master’s degree from Lesley in International Higher Education in 2016 (which was called the International Higher Education & Intercultural Relations program at that time). “It’s very motivating for me to keep making a difference in our field.”

Struzska-Tyamayev recalled the encouragement and guidance she received from Lesley faculty like Etish-Andrews, and she urges other young professionals to make those connections.

“The [master's degree] program was really good at bringing in people who do a lot in our field to help teach and encourage us,” adds Struzska-Tyamayev. “Between Lesley itself and the people I met through Lesley and NAFSA, I jumped four to five years of learning of that would have been trial-and-error by being part of this network.”

The awards were bestowed during the Fall 2018 NAFSA Region XI conference, held in Portland, Maine, at which former Lesley adjunct faculty Parker Emerson was also recognized with the Sally M. Heim award, which honors a colleague who has made outstanding contributions to the field of international education as a mentor. 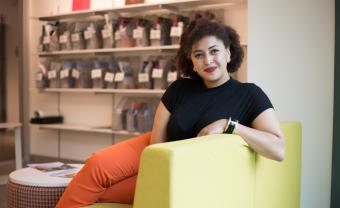